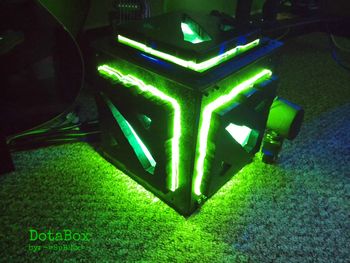 Jnthn Grlt’s DOTA Box placed 2nd in the case mod competition at BaseLAN 27 on October 31 2014. If you would like to reach out to him with questions, please see his contact information at the bottom of this guide.

Here is his account of building the DOTA Box.

Hey guys! I just wanted to share this little scratch build case that I made with a little Dota 2 theme on it. This concept was born from my passion on Dota and Dota 2. I have been playing that awesome game for 6-7 years now so I decided to make myself a trophy for being an avid fan and hardcore player of the game. Still not 100% complete since I was planning on making a pedestal stand for it tomorrow and make some custom sleeved cables for the power supply. The materials that I have used for this scratch build were mainly wood. Pine wood. The system inside of it is an “APU” type build since I will only be using this as an HTPC with a little bit of Dota 2 gaming. Here are the specs:

This was the concept that I came up with. The “LD” name on the picture is actually me and my wife’s initials. I am not related to the “LD” game caster; Although I enjoy watching some tourneys while he is doing the casting.

Glow test of the acrylic sheet

After I made the logo, I started to make the case. The case is just basically a 10x10x10 inch inside wall to wall case.