X-Wing: The Miniature Game For Everyone 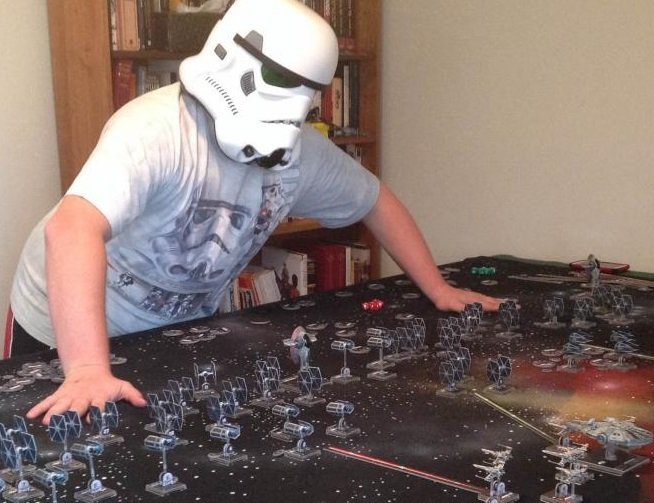 This past weekend, some of the fine folks who work for and with All Your Base Online, and some other friends who are equally as awesome, joined together for a night of merry Star Wars space-combat and dog fighting. And hot damn it was glorious.

The people playing that evening ranged from complete rookies, to people who have played nearly 50 matches. I’m closer to the rookie category, as I’ve only played a handful of games, but that didn’t stop me from making things super close in the 3 matches I played that evening. All in all everyone had fun and that, more than anything, is the best part of the game.

The premise of the X-Wing Miniatures game is to pilot your squadron better than your opponent, and take out their space craft. The factions range from the Original Trilogy’s Rebel Alliance, Galactic Empire, and another faction called Scum and Villainy. For the newer generation starting with The Force Awakens there is also the Resistance and First Order but they are interchangeable with the Rebels and Empire respectively in X-Wing. You can only play as one faction per game, but that doesn’t stop anyone from collecting from any of the other factions. Especially considering that there are different cards in every ship pack, but more on that later.

Each faction (whether from the Original Trilogy, or the New Trilogy), has its own set of ships, and each ship comes with several “Pilot” cards. They range from no-name characters such as the TIE Fighters’ Academy Pilot or the Rebel’s star pilot Han Solo of the Millennium Falcon. Each Pilot card comes with a different point value, which you have to factor into your Squadron List. You can have up to a 100 point cap in a normal game, so you can’t have too many high point ships roaming around without being unfair. And then there are “Unique” cards, which you can only have one of like Han Solo for example. This makes the game a really good balancing act, and honestly, building your Squadron List is the biggest and most important part of the game.

The miniatures themselves are actually really well done, and have a massive amount of detail on each, which can be really surprising on some of the smaller ships, like the Y-Wing, and the even the bigger ships like the Slave-1. The overall faithfulness to the original articles from the movies and other media is astounding, and the fact that they all come pre-painted makes it really easy to jump in, and envision how awesome your games can be. That’s not to say that you can’t add a little personal flair into your fleets.

The games. Oh the games. Man, can they be pretty freaking awesome! There were a few games that took well over an hour to finish, with some taking nearly three, but they were always spectacular. One match ended up in a chase, where a slight miscalculation in trajectory resulted in bumping an asteroid, which ended the game. Kind of a bummer, but it happens. The last game I personally played took nearly 2 hours, and came down to a TIE Interceptor going head-to-head with an E-Wing, winner takes all. I lost, but it was a stellar game that could have gone either way.

The best part? It’s super easy to learn! It IS required that you pick up the starter pack of either trilogy (this will run you about $50-70CAD, depending on where you get it), and each comes with 2 TIE Fighters, and 1 X-Wing. It sounds unfair, but if you are playing with basic ships, this can go either way, as the X-Wing is slightly more bulky than the TIE’s are. Aside from the ships, you get all the literature needed to play a game, as well as all the bits and pieces needed to play. This includes movement markers, the firing range indicator, dice, various tokens, and movement dials, just to name a few things.

The game takes place in 3 phases. Phase 1, is called the “Dial Phase” where you select what each ship you control will do. Your opponent will also do this at the same time as you. You will then put the dials face down, next to your corresponding ship (each ship, not matter what, has its own). It’s the simplest phase, but also the one where most of what the next round will look like.

Once all dials are down, this is when Phase 2 Starts. Phase 2 is the movement phase, and the person who has the least points used in their respective Squadron List will go first (they have the “Initiative”). If both players have the same score Initiative defaults to the Imperial player. Once it has been determined who will go first, the ships with the lowest Pilot Skill will go first. Once your lowest pilots move you then go to the next lowest points, be it your opponent, or yourself. So on and so forth until all ships have moved. There is a little more to this, but for the sake of keeping this interesting and not getting boring you with minutia I’ll gloss over it.

And finally, the Attack Phase. This phase takes place in the opposite order Phase 2 take place, so the Highest Pilot Skill shoots first. To determine if you can hit another ship you need that Firing Range indicator I mentioned earlier. There are 3 sections on this stick, and determine what bonuses you or your opponent get. Each ship also has a Firing arc, and this determines where you can fire. Most have an 80 degree arc, but there are a few that have 90, and even some that fire in all directions with turrets. Once all ships have fired their lasers, its time to head back to Phase 1, until only one player is left standing.

And that’s it. It’s simple in execution and play, but its something that will take the average player a few games to fully grasp all the finer details, and start to really turn the tides on their opponents. Of course, if they don’t get the best of you first. So get cracking Commanders, its time to set a galaxy far far away on fire!

Quinn Smith is a Writer and Streamer for AYBOnline. He prefers PlayStation consoles, but won’t shy away from Nintendo. His Opinions are his own.