World of Tanks Football (Soccer) – Get Ready To Kick-off 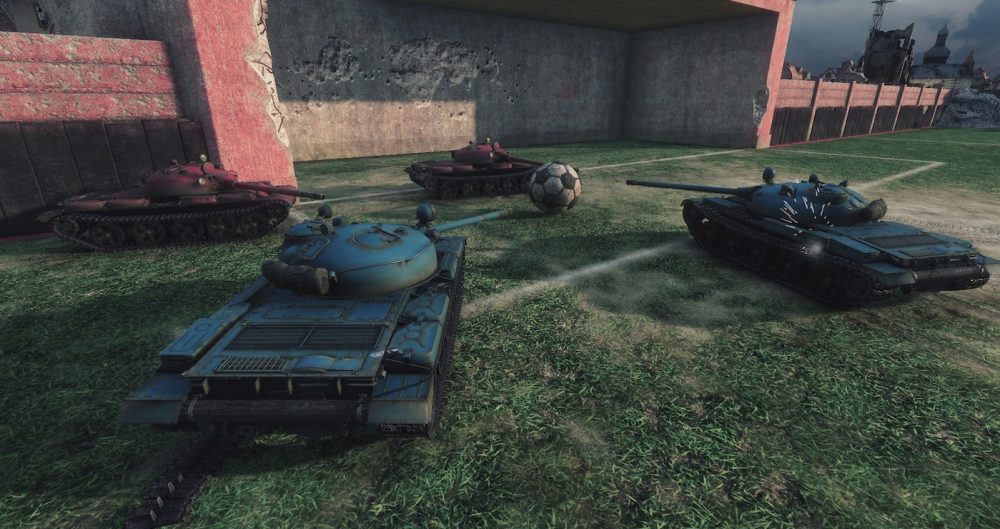 Kick-off summer on June 10th with the World of Tanks football event. You will be able to play with 3v3 teams to see who can score the most goals in seven minute matches.

Like Rocket League, you don’t actually run up and down the field using your legs; you use your tank to move the ball and score. During Tank Football 2016, all players will be credited the unique T-62a Sport (T-62a S) with a free Garage slot. To join the event, all you have to do is select your T-62a S and click the “Battle!” button.

Unlike Rocket League, you can use your weapons and blow each other up, disabling tank treads, ramming and immobilizing is the name of the game; anything to give your team that leg up in the competition.

There are 3 stadiums available to play in: Himmelsdorf Arena, Stade Eiffel, and Old Tankford. Tank Football 2016 will also let you tackle new battle missions solo or in a platoon with up to three teammates. You can even deck your tank out with a range of customization emblems and flags of the countries taking part in this summer’s major European football event.

Additionally, there will also be a tank football tournament held. The registration period for it starts June 1 and will last until June 15. All you have to do is build a team of 3 players to compete. The four best teams get one year of Premium Account time and a Type 59 tank for each member. They will also have the chance to compete against the 4 best CIS teams for a chunk of a $5,000 prize pool.

At the end of the event, the T-62a S, Garage slot and flags of the countries taking part in Euro 2016 will be removed from player’s garages. However, any medals and emblems earned will remain with you as a memento of the event.

Reactor303 is a Contributing Writer for AYBOnline Inc. His opinions, though extremely awesome and insane, are his own!
esports eurocup football reactor303 World of Tanks world of tanks soccer wot