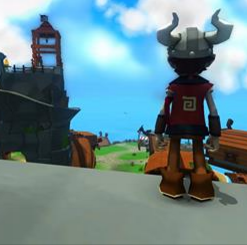 I was talking with a friend recently, about how it’s strange no one has given a real honest effort at recapturing the magic of The Legend of Zelda. Then in comes Cornerstone: The Song of Tyrim.

Developed by Overflow Games and published by Phoenix Online Publishing, Cornerstone: The Song of Tyrim is an open-world action RPG, with Vikings, sailing, crafting, and more. From the screenshots and trailers, it evokes the same strong sense of wonder as The Legend of Zelda games, and I’m personally looking forward to diving into this world on April 26th when this game becomes available on Steam and GoG.

The game features an open world complete with physics-based puzzles and combat, and action-RPG elements, allowing the player to craft gear and weapons. Boasting eight unique islands to explore, the game also features multiple different types of vessels to sail as well. This combined with the cel-shaded art style gives the game a well-welcomed dose of those Wind Waker vibes.

A free demo is available, and having just finished the demo myself, it feels about the closest a game has gotten to Wind Waker that I’ve seen. The writing is charming, it has some pretty comfy atmosphere, and it looks great. I highly recommend you check the demo out on the Steam page.

Overflow Games has also begun a developer diary series, taking a closer look at some elements of the gameplay and characters. Head over to learn a bit more about the game before it comes out!

Jake Carewick is Senior Editor, Indies for AYBOnline.com. His opinions are his own.