We Don’t Like It When You Say That. It’s Our Word. 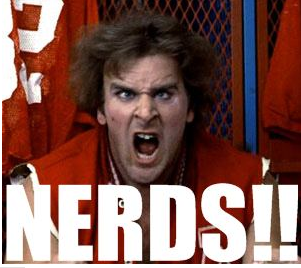 There is a couple of rules about the internet that many of us (especially if you’re reading this) take for granted. First, the internet never forgets. Ever. Second, anonymity gives everyone really big pitchforks. Third, in the time it took you to read those last two rules the internet has already forgotten what we were talking about.

I grew up in a small town about 40 minutes outside of Winnipeg. In grades 6 through 8 I went to a special school where instead of gym class everyday we played hockey. I played hockey more in those three years than many of you will play in your whole lives. To this day I’m terrible at hockey. Not due to lack of effort, I just never got it, it never came naturally to me. My brother, Jan, on the other hand is good at every sport he deems worthy of a ten-minute trial session.

In 2000 for my eleventh birthday my dad got me the StarCraft Battle Chest. In the following years Brood War would become my competitive outlet. Jan would make fun of me for sitting in my room practicing build orders and watching ProLeague. I remember cheering for Jaedong every game versus Flash. Jan had a picture of Joe Sakic holding the Stanley cup on his wall, and my computer background was Lee Jae Dong holding his golden mouse. The sAviOr match-fixing scandal in 2010 hit me like the NHL lockout hit hockey fans in 2004 and again in 2012. To this day Jan thinks E-sports are silly, when I tell him there are pro players he responds with “If I spent thousands of hours in front of a computer I would be just as good as they are,” to which I respond “If I spent thousands of hours on a hockey rink I’d be as good as Sidney Crosby too.” Neither of us are really sure if what we are saying is true.

On Monday, ESPN radio host Colin Cowherd lambasted his own network for their broadcast of the collegiate Heroes of the Dorm tournament hosted by Blizzard over the weekend. Without missing a beat the internet at large rose up in defense of our competitive pastime. The mob is out in full force, Reddit is up in arms, and Colin’s Twitter is a veritable hate fest. The internet, and through it a very serious lack of proximity, has given nerds around the world the ability and confidence to safely speak out against these sort of verbal wedgies issued by jocks around the world, but nobody seems to consider their side of the argument. You read that right, I said “the N word,” but I promise it’s alright. I can say it because it’s our word.

Colin is a consistent source of controversial statements for ESPN. He stirs up discussion with aggressive statements, but Reddit never got mad when he engineered one of the most low-tech DDoS attacks of all time against a rival sports website thebiglead.com. The gaming community didn’t get mad when he stole jokes from a Michigan fan blog. “Well none of those things affected us,” you might respond, which is my point exactly. Now I don’t agree with the way he went about saying it. His words were unprovoked, unnecessarily aggressive, and just plain mean, but I think that what he said was at its heart entirely justified. People seem to have forgotten that ESPN stands for Entertainment and Sports Programming Network and not E-Sports Programming Network. My fourteen-year-old self would have been livid if OGN was showing darts instead of StarCraft. So why should we expect ESPN to have video games on it? Colin joined a network with zero interest in video games and his distaste for the subject is totally his prerogative.

Most importantly from an E-sports perspective he’s a total nobody, so why is everyone getting up in arms? Let him yell and scream until he’s out of breath and it will affect absolutely nothing. I would love to see Dota and Starcraft on television, and I think that this partnership with ESPN is a step in the right direction, but I don’t think it will be our breakthrough role, and I don’t imagine Colin Cowherd will be the person who stonewalls our entry into mainstream media. So let him blow his horn, he’s still a jock, our natural enemy. Why would we start listening to what he says now? Let him preach to his conventional athletes. We should not care at all. Honestly, if I were good at hockey, I’d probably think we were all just a bunch of nerds too.