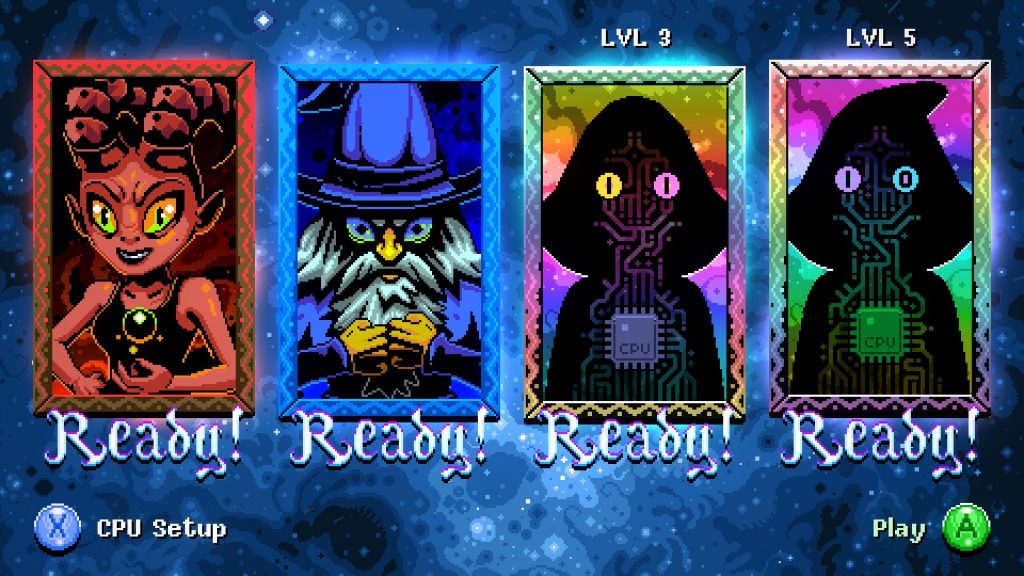 In the last few years there has been an influx of games that can really only be described as ‘projectile fighting games’. Games like #IDARB, Lethal League, Towerfall and many more. Now comes along the latest addition to this very specific and already saturated genre; Wand Wars.

Wand Wars is the first game by Moonradish studios; a small dedicated group of people who have poured their hearts and souls into this game, into this labour of love, and it does show. The game runs very well, it is nicely polished with no noticeable bugs and is very responsive, but is that enough to give Wand Wars a cut of this market?

Wand Wars is a very simple idea for a game: there’s a magical ball that you need to hit in order to destroy/banish other magicians while they try to hit it back to you while avoiding being hit themselves. Simple concept, simple execution. The controls are responsive and smooth, with very little delay between hitting the button and the character actually accomplishing the action. In a fast paced game like this, any delay between your action and the execution is the difference between life and death. The only thing that matters for me here is that this just works.

You have three moves, you hit the ball, charge up an arrow to turn other players into a chicken, or remove momentum from the ball. There’s power ups too but most games I played with my friends ended before a power up was even discovered. The hex ability to turn players into chickens felt unnecessary; even when I played against the hardest AI on my own I never needed to use a hex to win. It seems like it could have been replaced with an ability like a charge or a dodge.

Wand Wars has 5 multiplayer modes: Arcane Arena, Team Arcane Arena, Merlinball, Hexout and lastly Team Hexout. Arcane arena is a last man standing mode where you (or your team) try to be the last ones alive. In Hexout there is no ball and only the Hex ability. You win by hitting the opponents with the Hex and amassing the most points. Merlinball is soccer. You try to get the magic ball into the opposing goal.

The other modes are fun and add some variety to the game, but Arcane Arena is where you will probably spend most of your time in the game. It is where the game really comes alive. If Wand Wars supported the possibility of more than 4 players I could see the other modes being played more often, but as it stands Arena is the most fun.

The game is multiplayer focused but it comes with a serviceable story mode. It doesn’t stand out but it does what it was meant to do; provide an introduction to the game. It’s effectively a very long tutorial and while it served its purpose, there is very little reason to replay it. However, since it is a multiplayer focused game, the addition of a single player campaign is a welcome addition, if a little unnecessary.

The game is presented in a pixel art style, reminiscent of the NES era games. It’s a nice throwback to some older games, and it is a very good style for what the game does. There is no slowdown from multiple particle effects on screen at a time and the art works very well with the game itself. There are no resolution or detail settings, as is normal in a game with this art style. So not really anything new to mention. Something I did find odd however, is that in the settings menu there is an option to unlock everything that you would normally have to play the entire game to do. A very good option, but a strange place to play it.

The game does have some very nice music, some of which do get repetitive, but in general they are fairly good. Some of the songs were out of place for the specific arenas, but since there were no track titles I could see during the game, I could not pinpoint which ones they were. I am unsure if the music is bound to the arena or if it just cycles through the songs so I could not pinpoint which ones they were. All in all, I did enjoy most of the music.

I compared Wand Wars to Lethal League and Towerfall earlier and I’m sure you want to know, is it a contender? Sadly, no. Those two games are the gold standard by which I judge these projectile fighting games, and Wand Wars just isn’t quite there. It’s getting close, and does have a lot of potential to overthrow the two kings, but right now the combat is just not complex enough. There are few tactics in the game, no special abilities to differentiate the characters, and though the Hex was placed in the game to try and add some more technique to these battles, I don’t think it’s enough. However, I could be completely wrong. My experiences were limited to playing with 3 friends who played the game with  me, and maybe with some more hours of play we would discover some unseen tactics and methods to play the matches. As of right now, however, it just isn’t quite deep enough to capture me completely.

All the different unlockable characters are just different sprite with no special abilities or differentiating characteristics. It would be nice to see differences between the wizards, even if it’s just the way they attack, but as it stands right now all the wizards play the exact same, making it easier to balance the game, but making it very difficult to have a unique play style different from other people. There are quite a few maps in the game, and some of them have environmental hazards (one map has two hands that periodically crush the middle of the screen), some have little eyeball containers that reflect the magic blast and others just have different spawn points for the special items/spells that appear in the game.

I really wish that there were a few more game modes with some more variety, or the ability to play with more than 3 other people. This might be something that Moonradish studios add in the future, and I dearly hope they do.

Now, that being said, I enjoyed myself. Wand Wars is a good, solid game, and if you play with three other friends and enjoy these kinds of games, you will have a blast. Unfortunately for me, there just wasn’t enough there to really sink my teeth into. It was a fun few hours with friends and we enjoyed it while we played it, but ultimately we found ourselves wanting more from the game. That may have been intentional on the part of the developers. They may have wanted a simpler projectile fighting game for the masses, one that is easy to pick up and play, and that is what they created.

So if you like projectile fighting games, you owe yourself to check out Wand Wars, it’s selling on Steam for only $12.99 CAD or your regional equivalent.