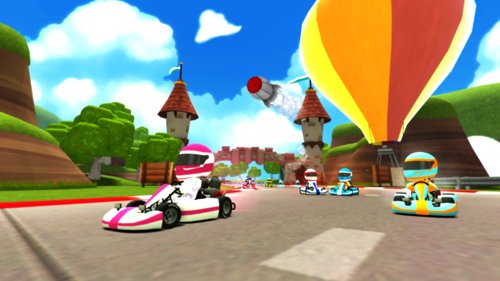 Recently I found myself looking for new games and demos to try on the Oculus Rift. I was trying to find something interesting for our demo station for our events. This search led me to find a little gem called VR Karts.

VR Karts is more or less a Mario Kart clone, but this one is built from the ground up in virtual reality. At the time, developer Viewpoint Games had just released the alpha demo of the game. The demo consisted of one race, with 2 laps.

Despite the ridiculously short nature of it, I found myself giggling uncontrollably. I was completely and utterly blown away by it all. I’ve played around with VR many times now, and this game was easily one of the best experiences. The only problem is that I desperately desired more. I’ve been madly following the page ever since.

The game was approved for Greenlight a while back, and was expected to be launched in Q1 of this year. They missed that target, but not by much. The game launched in early access earlier today  . It is available for $13.99 Canadian.

When VR Karts is fully released there will be more tracks, player and kart customization, and on-line multiplayer. For now the early access version has 4 tracks, and is limited to single player. The game will also be going up in price once it’s released. The final release is being targeted for the end of the year when VR headsets are expected to be available to consumers.

If you don’t have a VR HMD, don’t worry, AYBonline will be showing off the game at Baselan this May.