Under the Layers of Fear: Undercoat 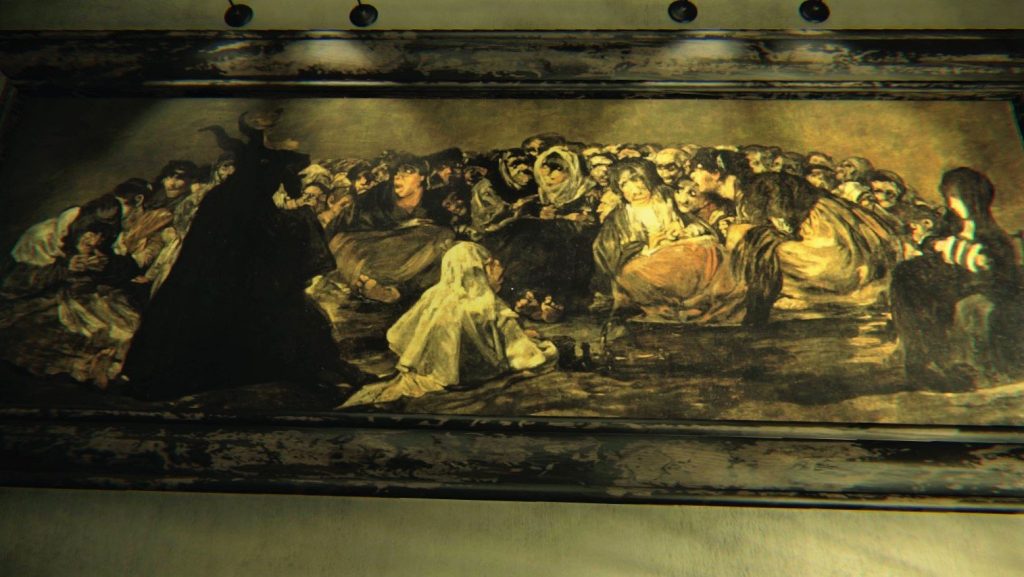 It’s good to be back with this, and for Part 4, I’m coming in hot with a look into the Christian imagery in Layers of Fear.

Religious figures and symbolism have had their place in the arts, especially during the Renaissance era. I’m not a religious person myself, but I’ve always been fascinated by the stories and the people, and the darkness and hope that filled some of the masterpieces of the time.

But Kate, we can’t assume what religion he practices, there’s no mention of it in the game! That’s just bad journalism.

Who says that religion has to follow certain idols or be practiced in a building? Personally, outside of my creative outlets, my religion is hiking. When I started hiking, it was during a hard time in my life and I needed some way to release the tension and let go of things. People practice certain religions to “reconnect” in some way, shape, or form; that’s what hiking does for me.

But let’s take a break for a pinch and see what’s on the menu in this feature gallery.

Francisco Goya’s later work is known for its dark imagery, but this one particular piece is noteworthy. Titled “The Witches’ Sabbath”, this painting portrays Satan as a large and looming goat, hulking over a coven of ugly witches. The witches shudder back in fear; however there is one witch that sits off to the side in defiance. While this might be a bit of a stretch, I interpret Satan representing The Painter in the moments he loses all sense of self, terrorizing his family. In wall drawings seen in his daughter’s room, when The Painter loses control and unleashes his wrath, she interprets this by drawing him as an angry red demon.

It’s been some time since I started this project and researched into all the pieces, and admittedly the one witch standing in defiance on the side has always struck me odd. However, since my recent visit to RTX and checking out the new Inheritance DLC, I feel as though the defiant witch might represent the daughter, who lived through her father’s madness to tell her own story. (Of course, I have yet to play the full DLC — but I will! And I will write all about it.)

This next piece, titled “Landscape with Tobit and the Angel” by Italian Baroque painter Salvator Rosa, depicts a scene from The Book of Tobit, where the angel Raphael approaches Tobit in what appears to be a river. In looking this scene up, this is where Raphael instructs Tobit to capture a fish and remove its heart, liver, and gall bladder.

Now, while this scene doesn’t really comment on much in the game, it should be noted that certain parts of the Tobit story are very popular to read at weddings during the rites. This is because of the book’s praise for the “purity of marriage”. I will leave it at that to let you ponder that a little as we proceed into the next gallery item.

Now, I think this piece is one that is very interesting, not only because of the undertones it places in the game, but because of the personal story behind the painting’s creation. “Judith Slaying Holofernes” depicts the violent beheading of Holofernes at Judith’s hands — one piece from a group of subjects from the Renaissance called Power of Women. While the painting portrays a scene from the bible, it was also a vehicle for the original painter’s cathartic expression of personal, unexpressed rage during a difficult time in her life.

History time: Artemisia Gentileschi — the painter of this piece — had a talent for painting from a young age. Her father, recognizing this talent, hired private tutor Agostino Tassi to hone her talent, as he knew of Tassi from working with him. During this time, Tassi raped Gentileschi, and sexual relations continued after the initial incident. Charges were eventually pressed against Tassi and a seven-month long trial ensued, with evidence found of Tassi’s plan for murder and theft. During this time, Gentileschi was to verify her testimony, in which she was subjected to gynecological examination and torture via thumbscrews. (Read Gentileschi’s bio for a more in-depth version than the TL;DR version I just gave.)

Tassi was found guilty and sentenced to one year in prison, although he never served the time.

There’s more information to Gentileschi’s life that I skimmed for the sake of the length of this (although, it’s going to be a long one already) so feel free to read more about her. Circling back to the painting, as I mentioned, the scene depicted of Judith and Holofernes is indeed one that comes from the bible, however Gentileschi casts herself as Judith, with Tassi as Holofernes, serving as a cathartic expression of unexpressed rage.

In many times throughout the game, you get moments where you peek into The Wife’s point of view. How much hatred she felt towards her husband, to the point of hoping he would kill himself in particularly violent ways. A lot of anger was locked away in separate rooms — in most cases of failing marriages, there is a history of fights and arguments, but I think for The Wife and The Painter, it was the opposite — they lived in a huge mansion with no sign of life or love in it, with a lot of tension but silence in the halls. Instead of expressing her rage, The Wife ends her own life.

This last piece is extremely noteworthy, particularly the fact that this piece is, in fact, from the corner of a much larger painting — a depiction of Hell by Herri Met de Bles called “The Inferno”. The Hell depicted in the full piece showcases the suffering of those sent to this chasm of torture: limbs being cut off by demons, large creatures seated upon souls to crush them, sodomy, and other typical tortures one can expect.

The featured corner piece in particular focuses in a couple of tortured souls seated at a table with lizards, snakes, and frogs. In Early Christianity, these animals were viewed very poorly and thought to be “toxic”.

The overall imagery of Hell could be a translation to the Nightmare that The Painter endures. In looking at the whole painting, there is an interesting scene that has to be noted in a separate area: a couple in a bed, surrounded by nightmarish demons; one in particular is on the chest of the husband, while another holds the heads of the couple to look at each other.

This could be an interpretation of the Painter’s inability to face his Wife after everything, but in his nightmare, he must face her in his own version of Hell.

With all of this said, the Christian imagery lends another dimension to the life of The Painter and his family. This circles back to a question left unanswered: What is The Painter’s religion? How did he stray off the path and how does he “reconnect” again?

Rembrandt once said: “Painting is the grandchild of nature. It is related to God.”

It might have been painting at one point, but how tainted and poisoned that gift became when bitterness and hate melded together with his ego. His Modus Operandi might have been the thing to stray him off the path, worshipping a “false” reality that he felt could save him. As I mentioned, in all of the endings, he is never saved: he either “reconnects” with his family and realizes everything too late and dies; or his shambling nightmare begins all over again, rinse and repeat.

Join me for Part 5, “Brush”, where we will take a look at notable pieces of art and compare them to altered versions that Bloober Team created.

Check out the previous installments of this series: Prologue (Part 1); Canvas (Part 2); and Paint (Part 3).