Under the Layers of Fear: Canvas 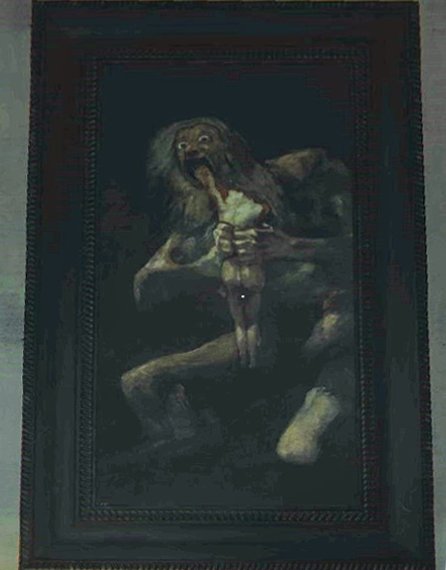 “Don’t kill all your dark areas – you need them to show the light.”

Yes. I just opened this with a Bob Ross quote (albeit one of his less goofier ones, which probably let down a few of you.) (RIP, Bob Ross.)

But it’s true. You can look at a photograph, point out all of its colours, but it’s much more than that. Light and dark play a huge role in our interpretation, whether it’s to define a subject’s shape, mass, or volume; or to convey a mood, scene, or even foreshadowing.

I want to showcase a few painters whose works are featured numerous times throughout Layers of Fear, whose own histories were possible inspirations to The Painter’s character in the game. Whose artworks also happen to take the subject of light and dark very seriously. There’s a fancier word for this — a word I’ve seen referenced in many games I’ve played recently, including Life is Strange: chiaroscuro.

Like last time, a little disclaimer: 1.) There are a lot of spoilers in this article, so please read at your own risk if you haven’t played Layers of Fear; and 2.) The views and opinions in this article are all my own. I will be offering my own interpretations and they are, by no means, concrete, canon, or confirmed by the Bloober Team.

Some of the paintings I’ve included in this are themed around violence as well, so consider this a warning.

So let’s talk a little about our guests of honour…

Considered one of the greatest portrait painters in European art and Dutch history, his works are iconic in their expert display of light and dark, not only in artistic effect but also in the spirit of his subjects. Rembrandt started out as an extremely successful portrait painter; however, he was met later in life with personal tragedies and financial hardships. Nevertheless, his work was still very popular throughout his time.

Rembrandt lived between 1606 to 1669, and was considered to be “one of the greatest prophets of civilization”, due to his empathy for the human condition. And for this next painter, such conditions would bear weight on his life in his later years.

A very successful Spanish Romantic painter, Goya experienced immense success early in his career, but at one point suffered a severe illness, leaving him completely deaf. After migrating to France, he suffered a stroke which left his right side paralyzed.

During his time in Madrid during the Peninsula War, many of his works featured imagery involving asylums, witchcraft, insanity, strange creatures, and religious and political corruption. Perhaps these subjects may have suggested his concern for the fate of his country, and also his fear for his mental and physical health.

Goya had a series of 14 paintings — some of which are featured in Layers of Fear — known as “The Black Paintings“. Fearful of old age and mental breakdown, Goya painted these works on the walls of his own home. Goya lived between the years of 1746 to 1828, passing away at the age of 82.

My last featured artist, while he only has one piece of work shown in the game, has a very interesting history that almost uncannily matches that of The Artist and I felt he was definitely worth mentioning.

Living between 1774 to 1840, Friedrich was a German Romantic landscape painter, and was noted as the man who discovered the “tragedy of landscapes”. His work later on fell out of favour and he eventually passed on, sadly into obscurity.

He suffered a stroke in 1835, which left him with minor limb paralysis, which also reduced his ability to paint, only being able to work with certain mediums.

Symbols of death began to show up in his work around this period and at this point, he lived as a recluse, his overall life marked with an overwhelming sense of loneliness.

Three different painters with similar histories, whose artworks are featured in a game touching on topics of immortality, loneliness, personal tragedies, mental illness, and physical struggles — issues that plagued these particular men in their own lifetimes at one point or another. Issues that The Painter struggles with in his own nightmare.

While you ponder that, let’s take a closer look at some examples of their work. The images have been screencapped from the game but I’ve included links to pages and images to get a better look and read more about them. Even after my doctoring of the images, I understand there are some details that aren’t so easily seen.

When I see these particular pieces, I recognize a common theme: struggle. I think these paintings that hang up in The Painter’s home speak of a darker side of his character — especially where some of these paintings are located.

The Rape of Ganymede is part of the story about a divine hero. Ganymede was a male youth, considered to be the most beautiful of mortals. This attracted the attention of Zeus, who desired Ganymede as his cup bearer (which, if you are aware of the history behind cup bearers, is a pretty huge deal). Rembrandt’s painting depicts Zeus transforming into an eagle to steal away with Ganymede. However, in The Rape of Ganymede, Ganymede is portrayed screaming and writhing in the clutches of Zeus — a urinating, squealing toddler. Not like he’s usually depicted in the legends.

Saturn Devouring His Son details the myth of the Titan Cronus (romanized to “Saturn”), for whom it was prophesied that one of his children would overthrow him, just as he had overthrown his own father, Caelus. Saturn consumed every child of his upon their birth, driven mad by his own violent acts.

In the exchanges between The Painter and his own Child in Layers of Fear, The Painter struggles between being a responsible father and tending to his own selfish gains (which usually means neglecting or endangering his Child.) As portrayed in The Painter ending, the end goal was always immortality for him. His paintings were his legacy, his portraits suspended their subjects’ lifetimes for eternity — especially his. Most people consider their children the legacy they leave behind, but playing the game, I could sense that fatherhood was primarily an obstacle for The Painter.

While I was writing this, I had theories that these paintings and their symbolism were projected directly onto The Child. But after rethinking and looking at some other things I caught in the game, I do think these paintings are somehow related to The Child but are more emphasized on The Painter himself. Especially after seeing this.

It’s hard to read but that is a goddamn copy of The Picture of Dorian Gray by Oscar Wilde. If you haven’t read it, here’s the synopsis: #DatPlotTho.

At first, I thought that The Wife & Child ending was canon at first, but after coming across this screencap, that belief dissipated. Personally, I think The Painter ending is canon, which makes even more sense as to why Ganymede and Saturn are paintings in the game, tragic as it is.

Saturn is a bit more obvious, but in the case of Ganymede, the youth was a symbol of eternal beauty and life; but Rembrandt’s portrayal depicts another side to it. Beauty and youth, struggling to escape the clutches of one of the most greedy and narcissistic gods; or perhaps the appropriate legacy The Painter should have left behind — his Child — feared their own father and the struggle is represented in Ganymede’s attempts to escape. To children, their parents are seen as God in their eyes.

As for Brigand Murdering a Woman, I think it’s obvious that it symbolizes the frustration and animosity The Painter has towards his Wife; however, the location of this painting is what is particularly disturbing. During the part where you enter the bedroom that has the Phonograph in the center of the room, if you take a look towards the bed, above it hangs this painting. Above the bed, where both The Painter and his Wife sleep, is this painting of a man violently killing a woman. Pretty messed up.

This final painting would have to be one of my favourites I’ve come across in the game.

It’s hard to see with the screencap I’ve added (so check that link I’ve included) but what you are seeing in this painting is a procession of monks, some of whom are carrying a coffin. The procession travels towards the gate of a ruined Gothic church, towards a freshly dug grave in the snow. Darkness overtakes the lower half of the painting, while the moon illuminates the sky.

The abbey itself is based off of Eldena Abbey, which was a former Cisterian monastery somewhere in Germany. All that remains now are the ruins, which were destroyed back in the Thirty Years War by invading Swedish troops, the abbey bricks re-purposed to construct defensive walls.

In the painting Friedrich draws a parallel between those actions and the use of Greifswald churches as barracks by occupying French soldiers. Thus, the funeral becomes a symbol of “the burial of Germany’s hopes for resurrection”. – Wikipedia

On one hand, I see this painting and think, “Right, the death of The Wife, their marriage, everything on display for the public to see being well-known artists in their own rights. Can’t come back from that.” (The Wife was a famous pianist in the game, too, thought I should clarify that.) However, I also think that it shows The Painter’s departure from his sanity, to a point of no return.

In all endings, there is no true resolve for his madness. In The Wife ending, the finished portrait of his Wife mocks him, laughing him into a waking state. He throws her painting into a room filled with portraits of her, all of his failed attempts. He enters his painting room, only to start the nightmare again.

In the Wife and Child ending, the finished portrait is of his family. In anguish, he enters the room of failed paintings, lights a match and sets the room on fire, laying himself to die along with them.

In The Painter ending, the finished portrait is of him, where it is hung up in a gallery for all to see. I can only imagine that the cycle begins again, after all is said and done.

In all of these endings, his madness is never cured; he either dies or the nightmare starts all over again.

Stay tuned for my next chapter in my series called “Paint”, where I delve more into the topic of mental illness in Layers of Fear and why the amount of self-portraits in the game is too damn high!

Check out the first part of this series called “Prologue“, where I talk about what inspired this whole project.