Under the Layers of Fear: Brush 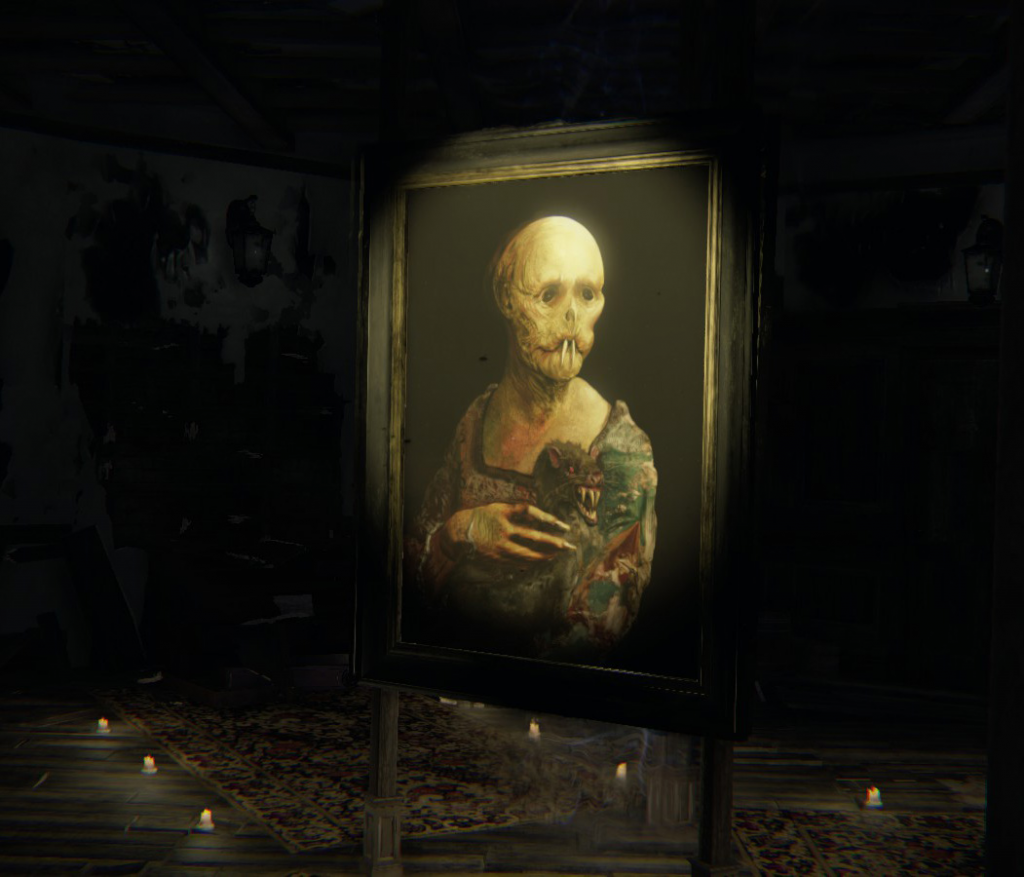 I’ve been focusing on a lot of the historical art featured in Layers of Fear, but for this installment, I think it’s time we aim the spotlight in a different direction: towards the incredibly talented team over at Bloober.

I feel I should note something before I move on, after reviewing some of the previous installments: the list of paintings and screenshots I’ve taken is incomplete. Because of this, I’ve had to research some sites that list some paintings and discoverables that I didn’t come across in my first playthrough. I fully intend to replay the game again to complete some objectives and obtain some of the hidden secrets I missed, but for now, I’ll comment on what I came across during my journey.

Layers of Fear is a real treat for those who love exploring and searching for the truth behind illusions. Some of my favourite things I’ve come across are the little stories added in by Bloober Team to add a macabre side to things.

Even better is when they make these stories available in a tangible form, like they did at Rooster Teeth Expo this year.

These stories are all items you can discover in the game, and I’m very happy I have this novelty in my home because I got to read some stories I missed entirely in my playthrough. So without further adieu, let’s take a look at what these stories are all about.

If you’re having trouble reading the script font, it reads: “Near the blueberry bush, by the emerald creek, there once lived a duck who was a bit of a freak. Not content to just splash away in rivers, she liked tearing out hearts and chewing on livers.”

This probably sounds odd to say, but when I came across the children’s poem, I loved how tongue in cheek this whole thing was. The illustrations lead you to think that this is just a cute poem with adorable illustrations of ducks, and then that last panel hits and I recall thinking, “Of course. What else was I expecting?” While I don’t think there is really much interpretation behind it in terms of the grand scheme of Layers of Fear, it does play up the theme of madness occurring in even the most seemingly happiest of stories. Much like the story of The Painter and his family, as normal and blessed as they appeared to the public, there was a much darker story going on underneath it all.

Next up, we have an age old fairy tale, with a classic Layers of Fear touch to it:

I really love the simplistic colour palette and the sketchy style of this classic. Again, while I don’t think that the story plays off too much of the main story of the game, there are some dark undertones to the innocence of the story. Perhaps the story can also be seen from the perspective of The Child as Red Riding Hood, illustrating her fear of her father (The Painter) during his bouts of mental break, fearing also for the safety of her suffering mother.

Our last feature is something a little different — a horrific take on a da Vinci classic “Lady With an Ermine” by Layers of Fear’s incredibly talented artist Bartosz Kapron. I mean, come on. This painting, both original and the altered version, is iconic, and if you’ve looked up Layers of Fear on any search engine, guaranteed this painting has come across your travels once or twice.

I have a lot to say about this piece and some speculation as to why it was chosen as the “poster child” of sorts for this whole universe. But before that, we have to go back in time — specifically around the late 15th century.

The subject of the original painting is Cecelia Gallerani, mistress of Ludovico Sforza, Duke of Milan. Da Vinci was in the service of the duke during this time. Throughout history, there have been many interpretations behind the portrait, particular regarding the significance of the ermine cradled in her arms.

Da Vinci, at one point, compiled a bestiary, where he recorded the following description of the ermine: “The ermine out of moderation never eats but once a day, and it would rather let itself be captured by hunters than take refuge in a dirty lair, in order not to stain its purity.” In another note, he repeats: “Moderation curbs all the vices. The ermine prefers to die rather than soil itself.”

Other interpretations muse that the ermine symbolized Gallerani’s purity and also made the association with her lover. With all this in mind, why the transformation of the painting to a monster holding a grotesque rat?

Rats are a repeated sight in Layers of Fear, whether in the form of Rat Drawings, notes regarding their presence in the mansion, or even their physical appearance in halls and corridors. If the beautiful portrait of Gallerani with the ermine represents purity and, more or less, love towards a lover, then I feel that the altered painting reflects the very opposite of that. The altered painting mirrors the reality of the situation regarding the marriage between The Wife and The Painter.

Disgust towards his Wife after her accident and his egoism transformed The Painter into a “disgusting, vile” creature, such as a rat. In all of the Rat Drawings, The Painter expresses fear and anger about the rats potentially infesting his body, his prosthetic leg, his home, everything. But the contempt and disgust invited all that emotional and mental filth, contaminating everything, especially his marriage.

And while The Wife was physically disfigured from her accident, her bitterness and hatred towards her husband to the point of wishing for his death twisted her to the point of suicide. Playing off the bestiary description da Vinci provided, rather than going through a potentially messy divorce or have their marriage under the scrutinizing public eye, The Wife would rather kill herself than face all of that.

At the end of it, their hatred for each other transformed their views of each other in a different, more revolting light. When a marriage is void of love and compassion, the bitterness manifests itself, projecting onto said lover, tainting every good thought you once had of them. The only thing you can see them as is a monster.