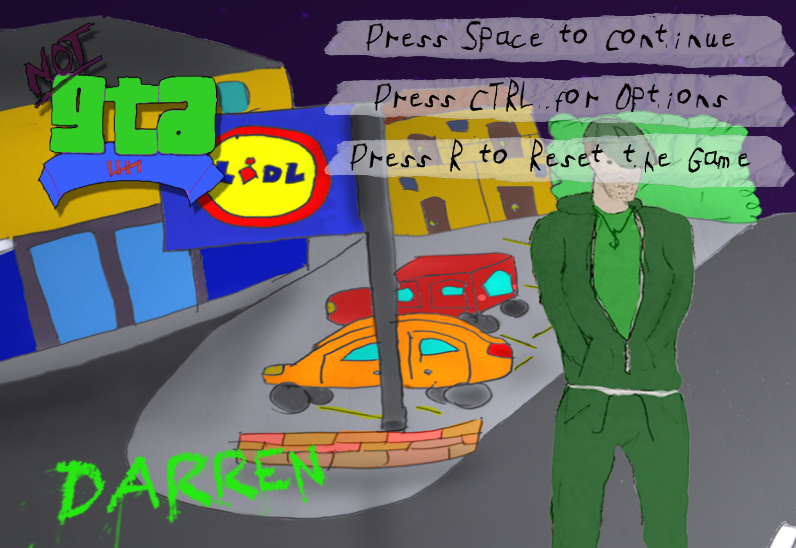 This game exists as a kind of purgatory, punishing you for the shame you’ve (probably) brought upon your family name. For all the crimes you’ve ever committed in Los Santos, judgement has come, stripping you bare and flaying you alive as penance for your transgressions.

This game was made for you, the fans of all things great in life: fast cars, non-specific violence, and that old Snake game on Nokia phones.

When we put NotGTAV head to head against the leading game series in automobile chaos, destruction and in-depth story driven narratives, we can easily find some very obvious differences — not only in the game play, but also in general layout.

First, let’s start with the menus.

As we can see, Grand Theft Auto V gives the player absolute control to do whatever you want: adjust screen size to a variety of resolutions, tweak screen brightness, slide the volume, adjust key bindings, and so on. Literally everything, even dumbing down your graphics to feel like you’re back in 2003. And for the more advanced player, or someone wanting to get more out of the game, you’ll also be able to receive notifications from SocialClub and edit in-game footage with the proprietary RockStar Editor to make some unreal vids. I’ve seen some amazing work come out of the Editor, including short films and cult classics such as Street Justice (warning: NSFW).

When we compare this to the main menu of NotGTAV, we see that the main menu consists of two easy-to-navigate pages, one for gameplay and the other in game options. This is where NotGTAV takes the cake and wins my heart: with their comprehensive menu settings. First, it boasts this extensive list of volume settings:

Literally looking back a mere two-minute read ago, in GTA V we are merely given a scroll bar, with no direction and no auditory signals as to how loud the game is until we enter gameplay. NotGTAV truly gives the player a superior level of freedom in sound control and reasonable expectations of sound quality.

Another feature that NotGTAV has that GTA V surprisingly lacks is difficulty settings. Sure, you can adjust this for Heist and some online portions of the game; however, for a casual like myself, I generally get wrecked in the main game. The player is forced to get good and fast. The gameplay you experience has more of a difficulty curve than an actual setting, so I often feel thrown to the wolves. Compare that again to NotGTAV you’ll find an array of difficulty settings allowing players of all skill to truly enjoy the game for what is is, pure art.

Players have the choice of:

GTA V does have better peripheral support with both keyboard-and-mouse and Xbox 360 / Xbox One gamepad support. The only additional support you will get out of NotGTAV is disabling the mouse, which leads me to believe it’s merely an additional difficulty setting and not an actual enhancement.

Graphically, both games are pleasing in their own unique ways. GTA V boasts the usual bevy of high resolutions, and running this hand in hand with a proper video card of the current generation like the MSI GeForce GTX 960 GAMING 2G, players will be able to get rich, full-bodied visual experiences, second only to The Witcher 3: Wild Hunt.

However NotGTAV boasts solid graphical performance as well. It’s rocking a windowed screen resolution of 800X560, and literally any video card from the last six years will be sufficient to run this game properly. With art assets painstakingly hand-drawn for your visual pleasure, this game leaves almost everything to the imagination, giving the player a much more intimate and personal experience.

We all know you play GTA V for the immersive online combat, Heist, and overall experience with your friends. There is almost nothing you can’t do online in GTA V. Owning a condo, skydiving, running in traffic — and, if you’re up for it — driving a tank in the streets. The possibilities are endless. Who doesn’t want to team up with their friends and wreak havoc in the streets and see how long you can last at five stars? Or pull off a legendary heist with the crew? Heck, if you really wanted to, you could sit on the couch and watch in-game cartoons while drinking wine (yes, I have done this). GTA V is basically a life simulator with MMO aspects and RPG leveling.

When it comes to NotGTAV, however, we can say without a doubt that it is the most ruthless, unforgiving take on Nokia’s Snake this world has ever seen. It’s as if Eris herself had started a game studio in the UK and pulled forth genius from the depths of absolute chaos. It is this gameplay where NotGTAV shines, frankly. It is the gameplay that sounds the trumpet of the archangel Michael, heralding an end to our sins and the coming of the throne of God.

In NotGTAV, you drive around a map and complete a series of objectives such as running over shoppers, or escaping a tank.

Obviously, this is another tie, as both games deliver such unique player experiences.

The transitions in NotGTAV are vastly better and quicker than GTA V‘s, as the hand drawn images allow for an instant and intimate transition between levels. GTA V, meanwhile, can take several minutes and, depending on the server, you could crash or not be able to get online at all. As a result, gameplay is much more consistent in NotGTAV.

GTA V gives one of the most realistic gaming experiences to date: from human interactions, walking, cars, and detailed models all the way to explosions, flight, aerial combat and combat physics. We can easily say that, as of this writing, GTA V is unmatched in this field… with the exception of NotGTAV.

Well, we have our winner. As if there was any doubt.

Before I shed my clothes and walk into a field to await the Rapture, I’ll break down the pricing for you.

NotGTAV is currently available for a cool $.82 CAD — something you could easily muster after selling some Half-Life 2 Steam cards.

The latter game will return to its non-sale price of $3.29 sometime tomorrow. Even at that price, you could take the money you’d otherwise be spending on GTA V and spend it on twenty-one copies of NotGTAV, perhaps the game of its generation.

Ultimately, NotGTAV is not GTA V in any way, shape, or form. But when it comes down to it, I found equal enjoyment playing both and would recommend both highly based off of my personal experiences.