The Weekly Nerd: Thoughts on Rogue One: A Star Wars Story 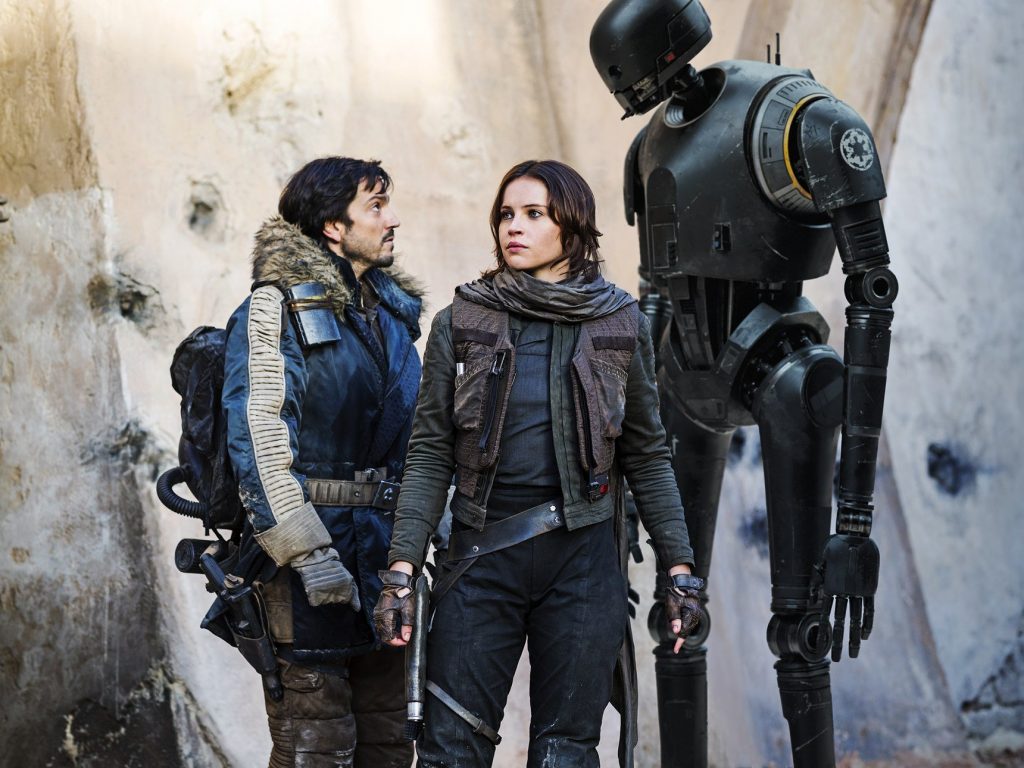 Spoiler Warning! This article will contain spoilers for Rogue One: A Star Wars Story.

Welcome back to The Weekly Nerd! It has been a while since I have written one of these, so it is great to be back to it! Recently I had the chance to watch Rogue One: A Star Wars Story. It was a really interesting entry into the franchise for many reasons. 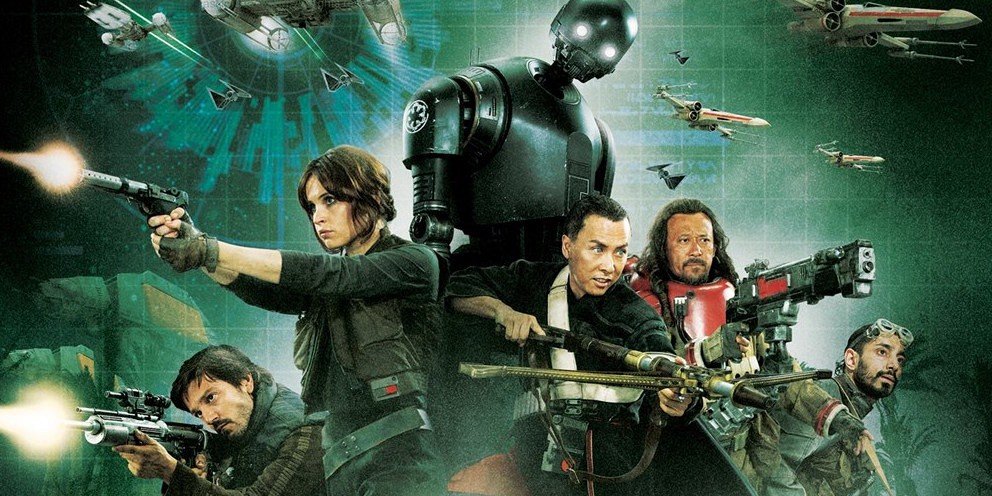 When watching Rogue One, it actually made me think about the larger Star Wars universe in a way the movies have never have in the past. For obvious reasons, the main movies focus on people who wield the Force and have an influence on the galaxy. While the heroes of Rogue One clearly have an important role to play, their influence is more of a catalyst to major events. Rogue One is really cool because it reminds me of the Star Wars extended universe books and comics that I read in the past. 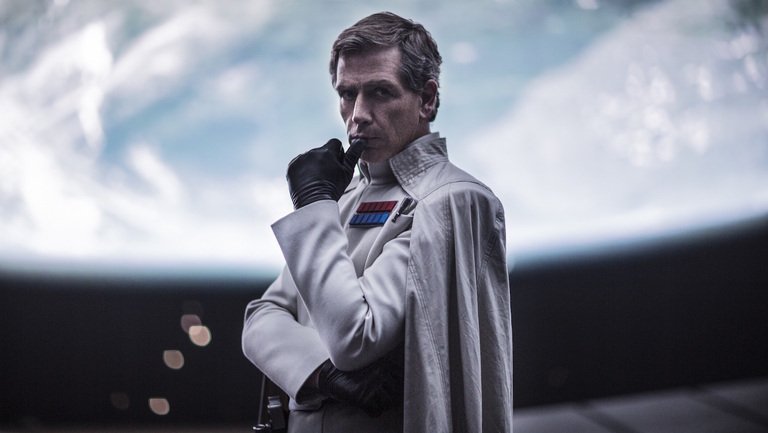 If you stick to the movies, it is easy to forget there is a massive galaxy full of different planets to explore and people to meet. Rogue One is the first time that the movies embrace this idea wholesale by focusing on a group of people who are essentially normal. This also extends to the main villain. Ben Mendelsohn (Bloodline, Axe Cop) takes on the role of Director Orson Krennik. Krennik is fascinating because he may be a director, but he is constantly overshadowed by people who are more powerful than him. There are scenes of him being a classic Star Wars villain by lording his power over people and ordering others to be executed but compare those to the scenes he is with Grand Moff Tarkin or Darth Vader. It can justifiably be argued that he is overshadowed and ineffective as a villain, but I felt that this was the purpose of his character. Even with his rank and power, he was essentially a nobody who could not get the respect he feels he deserves. He basically goes to Mustafar to beg Darth Vader for recognition. His reward ends up being getting force choked out by the Sith Lord. I feel that this is an incredibly important detail. If we contrast this with the scene where he has his Storm Troopers gun down a bunch of defenseless scientists, there is a distinct dichotomy between Krennik when he is in control of a scene and when he is not. When he is in control, his arrogance is undeniable but when confronted with a superior, he completely loses his composure. Compare this to Darth Vader talking to the Emperor or even Kylo Ren talking to Snoke and you can see how Krennik is much less in control than he would like to be.

Let’s take a look at our heroes in a similar fashion. The movie opens with Cassian Andor (Diego Luna, Elysium) killing an informant who was clearly scared shitless of the Empire. This dude DEFNITLEY shot first. Let’s compare this to the rogueish Han Solo in Star Wars: A New Hope. When our boy Solo walks into the scene and gets cornered by Greedo, he is not worried, nor is he pressed for time. He is calm, cool and in control the whole time. Even when Greedo is threatening him, he basically laughs it off. This is not a criticism of the character as this is what makes the man immediately likable. We will go by the (proper) assumption that Han shot first. He knew Greedo was going to try to kill or capture him, so he planned to take him out. When Greedo is smoldering on the table, He throws some cash down and says “Sorry for the mess.” That shit is cool as hell. Cassian, on the other hand, kills a man who is terrified and desperate. The man himself was not a threat to Cassian, but his fear could have gotten the Rebel operative discovered. Cassian killed this man out of his own perceived necessity. Unlike Greedo, this guy was giving Cassian valuable information and was not out to get him. There was nothing cool or glamorous about this death. It was hidden in a back alley so that he could slip away unnoticed. They went to great lengths to make the characters in this movie much less bombastic than the characters that we are used to. Both the heroes and the villain show a lot of desperation in a way we have not seen in previous Star Wars movies. 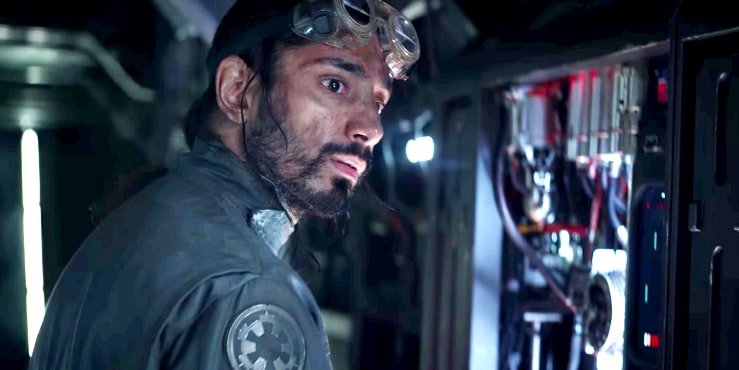 Desperation is an ongoing theme throughout this movie. I have read and heard criticism about the fact that the main heroes lack some characterization and do not really feel connected together very well. While I can’t argue with this, I feel it is also intentional in some ways. Besides Chirrut Îmwe (Donie Yen, Ip Man) and Baze Malbus (Wen Jiang, The Lost Bladesman), these are a group of people thrown together for a mission of pure desperation. Considering the overwhelming forces they are facing and the lack of quipping, it seems clear that they don’t fully expect to survive. In the main Star Wars cannon, there is an insurmountable sense of plot armour and luck protecting our main characters. This does not diminish the emotional weight or growth they face when major plot points hit. This just means their deaths are unlikely to happen. If they do, you can bet it will be dramatic and weighty. But not these Rebels. No, their deaths just… happen. None of the main characters in Rogue One make it out alive. They may not be Bothans, but they most certainly died getting the Rebels the plans for the Death Star. One of the deaths that really hit me was that of the imperial defector Bodhi Rook (Riz Ahmed, Jason Bourne). A grenade just landed at his feet. For a moment, I expected a familiar John Williams swelling of music while Bodhi picked up the grenade and threw it away in the nick of time. But that did not happen at all. He just closes his eyes and gets obliterated. Even though things during this assault had already been going pear shaped, this was the moment that it really landed that these were the hundreds of Rebels that were fighting in the trenches every day. These heroes we have been following are the ones holding the line while Luke takes on Vader or while Rei and Fin fight Kylo Ren in the forest. These are the brief and desperate lives of the soldiers whose role in the war is pivotal, but we don’t get to see them.

This is incredibly true for the jaded Jyn Erso (Felicity Jones, The Theory of Everything). She is in pain due to the loss of her family and feelings of abandonment. I feel the main reason she joined the Rebels cause was not out of a sense of duty, but to make her father’s legacy matter. He risked his life to put a fatal flaw in the Death Star’s construction and she wanted that to matter. The only shred of her family that is left is in these plans, so she risks everything to get them. She is not guided by fate, nor is she on a hero’s journey to find herself and her true purpose. She is desperately trying to survive when we first meet her. By the end of the movie, her only goal is to get those plans to the Rebels, no matter what happens to her. Jyn is talented and scrappy as hell, but she does not have a light saber or a mentor. She knows what she needs to do and she does it herself. In the grand scheme of things, her actions prompted the Rebels to start fighting back for real, but that was not really her intention. Getting the Death Star Plans is a personal endeavor for her. This is a great reminder that every soldier within the Rebels’ ranks has their own personal stakes as to why they fight. Each of those X-Wing pilots that gets shot down has their own background. Each of those Commandos in the jungles of the forest moon of Endor ended up there for a reason. Jyn’s personal journey takes her to facing off against the Empire.

I think my favorite part about Rogue One is that it reminds me of reading a Star Wars extended universe book. The main movers and shakers in the galaxy certainly make their presence known, but the focus is on a bunch of people who don’t have the same powers or sway that they do. Rogue One, while connected to main narrative of Star Wars, tells a smaller story about normal people doing their best to get a job done. If this is any indication of what is to come, I am really excited to see what other stories can be told in the Star Wars universe.

The only reason Nedu did not dress up to see Rogue One was because he could not find his Wookie mask. He is also a content writer for AYBOnline. His views are his own.