The Weekly Nerd: Take A Bite Out of Chew 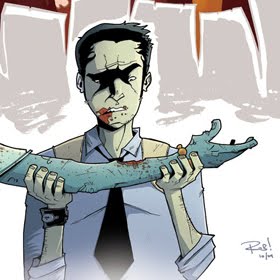 Welcome back to the Weekly Nerd! I will admit that I spend a lot of time in this column talking about Marvel and DC comics. Growing up, the bulk of my experience with comic books was with these two major companies. Even though I became acquainted with these worlds and their interweaving narratives, certain plotlines (Spider-Man’s Clone Saga) and character introductions (Azrael taking over for Batman) really soured me towards these heroes. I was so annoyed that I stopped reading comics for a few years. What brought me back were some of the off-kilter comic books. Runaways, Alias, Spawn, and Bomb Queen showed me that there were other series besides Spider-Man and The Flash that I could really get behind. These days, while I’m still a Marvel and DC scrub, I try to make sure to branch out every once in a while. One comic book series that has really stood out to me is a little series called Chew. 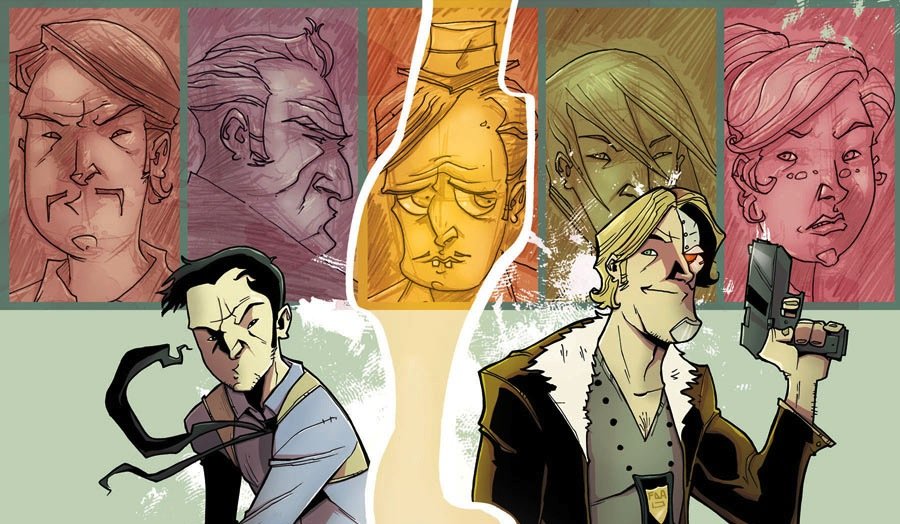 Written by John Layman (Marvel Age: Fantastic Four), drawn by Rob Guillory, and published by Image Comics, Chew made its debut in June of 2009 and has seen its last issue released this month. During its run, Chew has gained quite a bit of notoriety. Volume 1 and 2 of Chew‘s trade paperbacks both made the New York Times Bestsellers List. It also won Eisner Awards for Best New series and Best Ongoing Series in 2010 and 2011. But enough gushing. Let’s talk about the series. 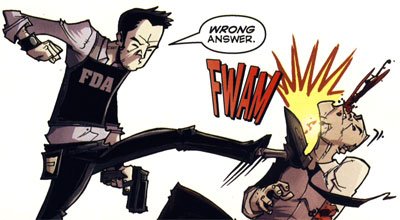 A World Ravaged by Chicken

Chew has one of the more unique setups of a comic book series I had ever read at the time. The comic focuses on the exploits of a US Food and Drug Administration (FDA) agent named Tony Chu. In this weird version of Earth, there was an epidemic break out of the bird flu that killed 20 million people in the US. Because of this, all chicken and various other bird meat is now outlawed. The most interesting aspect of this series is the super powers various people have. Tony is known as a cibopath. He has the ability to get a psychic imprint of anything he eats. If he chomps on an apple, he will be able to tell you where it was grown and what pesticides were used on it. If he eats a hamburger, he will literally experience the cow it came from being slaughtered. Interestingly, this ability also makes Tony a great detective because he can take a bite out of a dead body to see how they died.

The world that Chew takes place in is certainly a strange one. There are many people with strange powers, all of them food-related in some way. There is a man that can carve anything from statues to deadly weapons out of chocolate. Another character has the ability to write so accurately about food that anyone who reads her work gets the sensation of eating the food she is describing. The amount of creativity Layman employs in the various food-related abilities is both inventive and hilarious. More than once, Tony’s ability is the butt of a joke. The way he grimaces when showing down on a dead body is appropriately unnerving, but this never stops him from using his powers to seek justice. 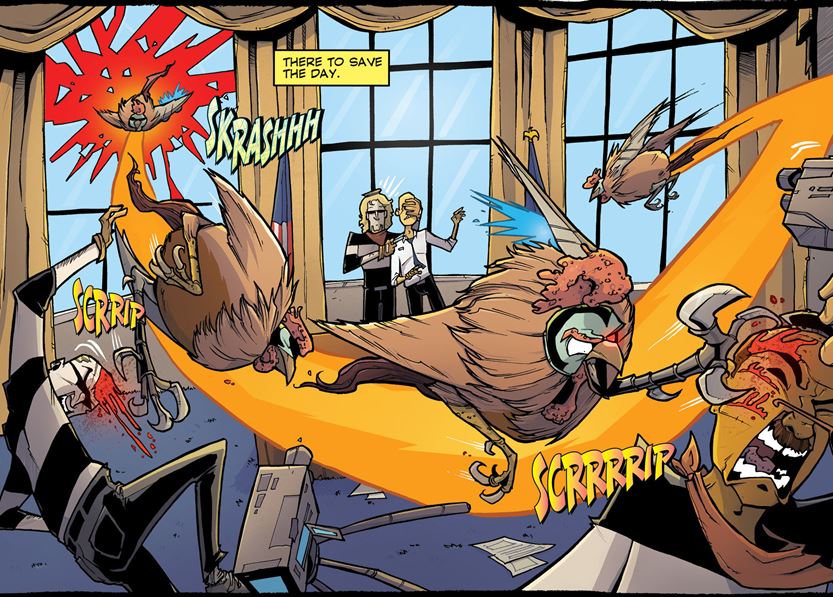 The tone of the series is very unique. As you can tell from the above description, Chew is quite bizarre. Luckily, the series has an absolutely irreverent sense of humour. The characters are aware of the absurdity of these food-related powers and often comment on this fact. There is also a badass chicken who has been hardened through years of cockfighting named Poyo. He is terrifying and is sometimes used as a deus ex machina to save the protagonists from certain doom. This series does not take itself too seriously and takes pleasure at poking fun at the characters and the world they live in. Even with the humour, the comic is incredibly violent, with characters dying in shockingly graphic fashion. 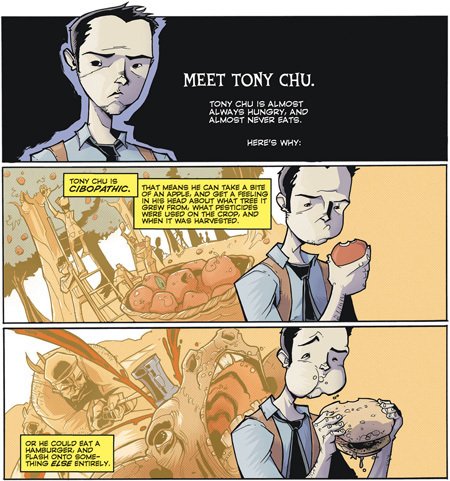 Chew is immediately recognizable thanks to Rob Guillory distinctive artwork. The humans are all exaggerated, often having specific aspects of their design that make them immediately identifiable. Tony’s best friend, John Colby, is injured early in the series and returns with cyborg implants on his face. Tony’s boss at the FDA, Mike Applebee, is a bit overweight and has sweat stains under his armpits. Every main character is visually memorable.

The world they inhabit is equally interesting. There are two things about the environments that are immediately striking. First of all, the society that the characters live in is just as irreverent as they are. There are often signs and posters that are hilariously sardonic. There is a former fast food chicken joint called “Mother Cluckers” that is cleverly shown degrading over the years after the avian flu. There is a sign in the cafeteria of a prison that describes the menu as “Solidarity with a side of shank!” Again, the world does not take itself too seriously. Secondly, all the food in the comic looks gross or weird, whether it is fast food or a restaurant delicacy. It really helps the reader see, in a way, how Tony views most food items. No matter the quality of the food that is placed in front of him, it is always off-putting because of his powers.

While Chew has a lot of bizarre characters in a strange world, but that does not lower the stakes. There is a real air of mystery around the bird flu and the black market surrounding the smuggling of chicken. The story expands as certain characters are revealed, alliances shift and truths are uncovered. Throughout this whole story, there are lasting consequences for the main characters, be they changes in their careers or their actual death. Despite the comedy, Chew never sacrifices storytelling or character development for a cheap gag. It really commits to telling an interesting story. Throughout the overarching storyline, there are smaller cases that flesh out the world. We also get to meet Tony’s large family as we get deeper into the comic, further deepening him as a character.

Chew is very unique and one of my favorite comic book series I have ever read. Unlike a lot of the long running Marvel and DC comics that I love, it has a very clear beginning and end, so getting into it is not hard at all. I would definitely recommend this series to any comic book fan. With the story finally wrapping up after seven years, now is as good a time to start reading than ever. The volumes are very easy to find, so if you don’t want to buy the 60 individual issues, this is definitely a viable route. This is a strange comic that is really like no other I have ever read. If you want to read something a little different, give Chew a shot. You will not be disappointed.

Nedu was once attacked by a chicken as a child. He now laughs maniacally when ever he eats one. He is also a content writer on AYBOnline. His views are his own.