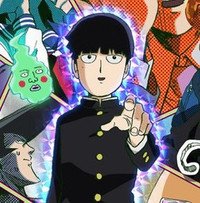 Every once in a while, a manga or anime comes by that surprises you. Sometimes you just jump into a series without really knowing what you are getting into and that can be a gamble. This was the case when I started Mob Psycho 100. This anime, based on a manga with the same name, was created by One, the same person who created One Punch Man. With that in mind, I felt this series would at least have some strong humour. Luckily, Mob Psycho 100 had that and a lot more in spades.

The story focuses on Shigeo Kageyama (nicknamed Mob), a middle school boy who happens to have psychic powers. In this world, people with these abilities are called espers. He works part-time for his master Arataka Reigen, a charlatan who works as a fake exorcist. He basically confuses his clients with his quick wits while Mob performs the actual exorcisms of evil spirits. Despite Mob’s incredible powers, he just wants to live a normal life. Throughout the show’s 12 episodes, viewers are introduced to a lot of secondary and tertiary characters who each have a healthy dose of personality.

Every Character is Weird!

As with any series, the characters are a huge part of what makes this show great. As I said earlier, even the minor characters have a lot of impact. Each character has some sort of quirk that makes them unique and hilarious. One of Mob’s early rivals ends up getting a change to his physical appearance that makes him look hilarious, yet he acts like it is totally normal. Reigen is highlighted as his shady business practices and his overbearing attitude are incredibly amusing. This seemingly amoral scam artist will sometimes surprise viewers by how put together as a person he really is.

Because of the fact that Mob Psycho 100 and One Punch Man were created by the same person, comparison’s are bound to happen. In many ways, the series share some similarities. Both feature main characters who are incredibly and inexplicably powerful beyond measure. Both characters are also oddly mundane as characters despite their incredible powers. In Mob Psycho 100, a lot of the humour of the series is derived from the fact that Mob himself is a pretty dull person. He is not very good at reading a situation, he lacks charisma, and he has very little physical strength. His pathetic attempts at strength training are both hilarious and endearing.

For a show that is so funny, there are some interesting themes on display. Again, Mob has amazing powers that manifest themselves at various points in the series. He can easily solve a lot of his struggles by using his powers, but he strongly believes that his powers do not make him special. Mob is often pitted against people who believe their abilities make them fit to have power over others, while Mob feels that he is just a normal person who happens to have psychic powers. This dichotomy of viewpoints comes up quite a few times throughout the show.

The animation in Mob Psycho 100 is quite impressive. The anime studio Bones really knocked it out of the park with a unique art style that leaves the actual characters looking somewhat simple, but matches One’s rough artwork from the original manga. The art is deceptively simple as the animation itself is very clean. Like a lot of modern anime, the show is colourful and bright, with very distinct character designs. Where Mob excels are during its intense action scenes. When the shit hits the fan and Mob gets serious, things get quite wild. Each esper has a different psychic ability that is displayed in spectacular fashion. The first major action scene was quite surprising as I did not know what to expect. The first couple episodes had Mob facing off against evil spirits. While these scenes looked great, the fights between espers are absolutely beautiful. The effects used for the psychic powers are interesting because every esper has a different aura. There is some clear effort put into making the abilities have a lot of variation.

Mob Psycho 100 also has a great score. There is a weird combination of goofy music, mysterious tracks, and intense battle themes. The intro and ending themes are both very engaging as well. The opening theme, 99 performed by Mob Choir is quite catchy and captures the off-beat feel of the show.

As much as I enjoyed the show, it is not perfect. Like One Punch Man, the main character is overpowered, but unlike that series, Mob has a fairly standard story. It does little to subvert anime tropes as it is a fairly standard shonen series. Because of this, the story and its events are very predictable and there are inexplicable power increases at key moments. The world itself is not the most developed. Even after watching the 12 episode season, I am not sure how aware people are of espers. Many of Mob’s classmates seem to know about Mob’s powers and not make too big a deal of them. Having said that, there is a scene where the news reports on the results of one of the battles. It is clearly being covered up, but it is unclear who is covering things up. Another thing that is a missed opportunity is that there are a couple subplots with the minor characters that are interesting, but ultimately go nowhere. Hopefully these can be explored in subsequent seasons.

Mob Psycho 100 is well worth your time if you are a fan of shonen anime. It only has 12 episodes at this time, so it is not too much of a time investment, and the show is both hilarious and action-packed. The show is available on Crunchyroll as well, so it is easily obtainable. This is a show that is easy to recommend.

Nedu has been trying to bend spoons with his mind since he was a child. He is also a content writer for AYBOnline. His views are his own.