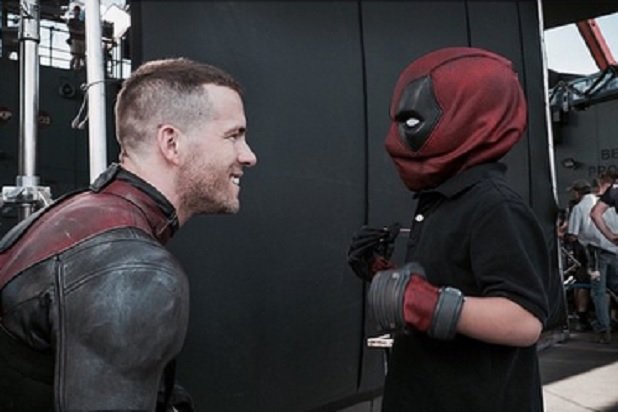 There are 2 things that I want to talk about:

It’s been painfully obvious that I was hyper excited for Deadpool. I went on Thursday night to the IMAX showing with a huge group of people. OH MY SWEET Spaghetti Monster, I can’t really put in to words how amazing this movie was. This WAS an origin story done in the best possible way. I will say that this is NOT a movie for children. It is rated R for a reason, and I don’t care how progressive or mature your kids are, please don’t take them to the theater.

Lets break it down a little bit, Shall we?

I will admit that I did not really know Morena Baccarin’s work too well before this. Sure, I’d seen Serenity (but I haven’t watched Firefly *you can shoot me later*) and we all know how I feel about Gotham. HOWEVER, she was absolutely perfect in this role. Her snark and crass perfectly countered Wade/Deadpool and also… she is more than gorgeous enough to counter Ryan Reynolds’ perfection. In one of the trailers she talks about not being good about playing the “Damsel in Distress” very well, and she was correct. This woman definitely holds her own. Here’s the bigger picture, In the Deadpool universe, her character develops latent mutant powers. Is it possible that we get to see CopyCat in Deadpool 2?

The producers of this film have actually stated that during early scripts and story development, they played around with other support characters and they settled on this one simply because of the name. I am glad that they did. Her role was small and they didn’t really develop her character too much, but she delivered on her moments very well. Even though her role was not huge, the writers managed to develop a bond between her and Wade that I was able to see by the end of the film.

This man lives and breathes Deadpool. There is not another actor that I have ever seen that could play this role and pull it off anywhere close to the perfection that Reynolds delivers. He has been fighting to bring this character to life and it is worth every single second, for multiple visits.

I really loved the way that Ed Skrein played this role. Short of being cybernetically enhanced, this character was almost perfectly spot on to the comic version. Skrein actually plays a very convincing villian, which I was pleasantly suprised with. The big bad was my biggest “danger point” in the development of this film due to the fact that they showed nearly no shots of him in the movie promotion, short of a quick fight clip.

Without Spoilers, these are the things that I loved the most about the film. While I love the 4th wall breakage and all of the comedic references to other projects, stories, and universes they were just flair. The reason that I love this movie is because it delivers on story and character development.

WHY OH WHY COULDN’T WE HAVE HAD THIS TRAILER MONTHS AGO? Like, screw all the tiny development pieces, the tv spots, and crap that did nothing but make people question their drive to see this movie. When I saw this trailer, all I thought was “why couldn’t I have released this trailer in November instead of dropping the doomsday bomb”. The trailer played before my viewing of Deadpool and the people I went with said that if they had seen this trailer and not all the other spoiler ridden pieces they would actually be excited to see it.

I would have been immensely satisfied if this had been the ONLY trailer for this film. I would have been really excited for this franchise beginning film. I hope that this manages to pull some people that had written this movie off back to the theater.