More Deadpool? Yes, not tons of it but some.

I really want to touch on the use of Deadpool as a marketing campaign for cancer awareness.

This was a great use of a popular platform to get people checking for their own safety. I can’t reiterate enough what they are sharing in this campaign. Check yourself. Hell… check your significant others if you want, but get it done.

Here are the ads:

Another point we should address following Deadpool’s release is the following meme, and memes like it: 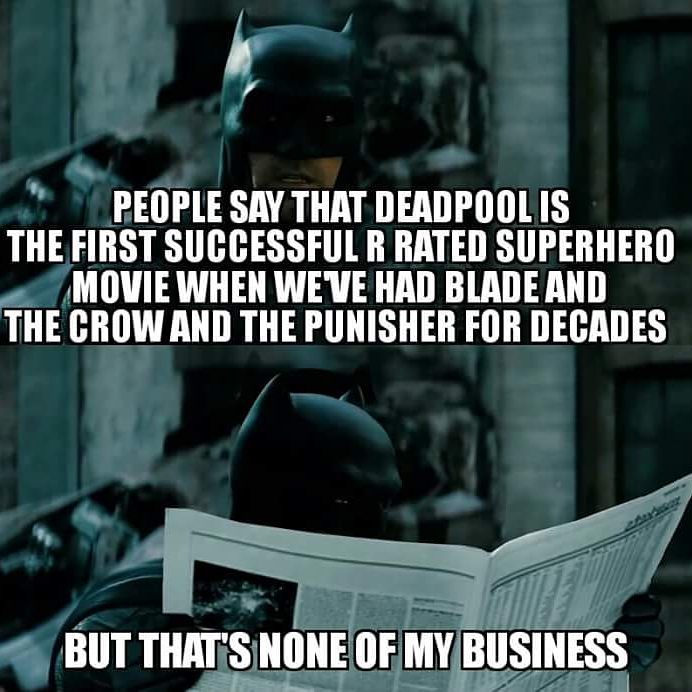 Now, I will agree that Deadpool was not the first rated-R superhero film, or even the first rated-R Marvel film. However, if we go through the list of R-rated Marvel movies, it isn’t quite the blockbuster lineup. The list totals seven:

(Oddly enough, Reynolds also starred in Blade: Trinity, and it was shortly after shooting that film when he was introduced to Deadpool.)

As we can see, for the most part the previous rated-R Marvel properties were far from stellar. In fact, I would go so far as to say that a few of them are nearly garbage on the screen. The Blade series made money, though not hand-over-fist, and that’s why they kept making them. The Punisher movies I am convinced were just made to keep the license in-house at Sony (á là Fantastic Four).

Some notable rated-R movies based on non-Marvel comics include Dredd, Kick–Ass, 300, The Crow, Watchmen, and Darkman.

But now that we have a movie with widespread fan and critical acclaim and a big take at the box office, we’ve seen a slew of upcoming movies saying they want to be rated R as well.

The first on the list is the third Wolverine film, to be based on the “Old Man Logan” storyline. The studio is also looking into making an X-Force film, which could could also put to use a number of the non-mainstream X-Verse characters that they have introduced through the current run of movies, like Sunspot and Warpath from Days of Future Past, or Psylocke and Archangel from Apocalypse — not to mention giving Reynolds another opportunity to grace us with the presence of Deadpool, and possibly more of Morena Baccarin’s Vanessa Carlysle if they decide to turn her into Copycat.

I guess that might be enough ranting. Let’s take a look at some of the other things that have caught my attention over this last week.

Daredevil Season 2 is looming ever closer, and we have some trailers. First up, the trailer that focuses on Jon Berenthal’s Punisher.

I really liked this one; quick clips indicating his motivation and some of the depth they are going to develop to describe the tension between these two characters.

Something to think about is, how true was the Punisher’s statement regarding DD? “You are only one bad day from becoming me.”

There were also trailers released about Foggy and Karen — though short, they do help indicate their motivations for the coming season. Foggy is understandably split on the decision to help Matt, but how will that impact him and their friendship?

In other comic news, Todd McFarlane has announced that he has finished a script for a new Spawn movie. Since 1999, there have been rumors here and there that there would be another movie (following the 1997 New Line film and the three-season animated show). Who knows what this story will hold, or even if this movie will get the green light? Here’s the limited amount of what McFarlane said about it to Comicbook.com:

“I’ve finished the script, and I’m in the process of editing. It’s 183 pages, and [producers] usually like 120. I still think it’s going to end up being about 140, because I’m putting in details for myself.”

The good part to this? I would hope that with the character’s creator writing the series, it will be as true to the story as one can get.

Lastly, Disney and Hasbro have announced that they will hold another “Force Friday” for the upcoming Rogue One film. This is a toy collector’s dream (and parent’s worst nightmare), as they will announce every single toy line that will be released leading up to Christmas. Force Friday 2016 takes place on September 30th, HuzzaH!