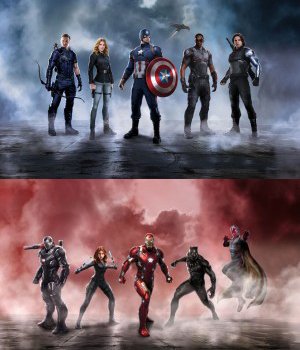 Alright ladies and gents. It’s Saturday and I want to talk.

The trailer that I have been anticipating with shaky hands and the twitch generally reserved for addicts dropped this week, and I really couldn’t be happier. Watch and enjoy the goosebumps.

Now, HEAR MY THOUGHTS! I really like the start to this trailer – it is showing that the themes to this film are going to be quite dark and the tones are held through the duration to the end.

They are very purposefully showing the bonds surrounding Captain America. One might assume they are doing this to develop stronger ties between Cap, Falcon, and Bucky. But why would they do this?

Because in the comic depictions of Civil War, Captain America DIES. He is eventually replaced by Falcon; HOWEVER, during the Civil War arc, Bucky also temporarily takes on the mantle of the Red, White and Blue. The scene at the end of the trailer with Bucky and Cap utterly wrecking Iron Man (click for the gif) legitimately gave me chills.

There were two character reveals in the trailer: Crossbones was shown (for a quick second) getting kicked off of a car, and there were two back-to-back scenes with Black Panther. All were flashes and did not really have any huge impact on the trailer. I am immensely glad that they did not show Spider-Man in the trailer, mostly because I don’t believe that he will play a huge role in the film so I don’t think they should really include him just for the sake of hype.

Now, my thoughts on where this will take the MCU. Spoilers ahead!… kinda.

I think that this movie is going to split the Avengers down the middle. Cap to one side, and Stark to the other. They will split up and the Cap side will become the Secret Avengers. My theory is based on the fact that they are choosing to leave Thor and Hulk out of the fight and (quite likely) introducing Valkyrie into the MCU. Couple that with what was released earlier this year showing how the teams are splitting (see above), I am more inclined to believe that we can look forward to this inevitable future.

I’ll keep riding the Marvel train with some good news: Fox has officially pulled the sequel they had scheduled for Fantastic Four off of their roster. This was done quietly, as part of some announcements involving changes for upcoming movie releases. I am happy about this. They did many sad things to this franchise and we can only hope that they don’t try to revive it in another Frankenstein-esque manner.

Please Fox, let it die. Give the rights back to Marvel. #dotherightthing

In the realm of DC however…

The image to the left was released this week on SuperHeroHype. It is said to be the Wonder Woman logo that is going to be used in the upcoming movies starring Gal Gadot.

DC is also casting another heroine for a role in the Justice League movie. Rumors indicate that Abbey Lee (Mad Max: Fury Road) and Alona Tal (Supernatural) are up for the role of Black Canary. This is only rumor as I mentioned, and has been linked to a possible Birds of Prey spin-off film. Given that Jena Malone (Hunger Games: Mocking Jay) is playing Barbara Gordon in Batman Vs. Superman, I can’t help but raise an eyebrow to that.

Now, the future is up in the air and full of speculative grasping, but we can hope that the extremely strong female superhero population will begin to see some traction.

There have been some more reports regarding the DC TV universe as well. Supergirl is currently casting a teenaged Superman. This will be a recurring role – something to help develop the bond between Kal and Kara.

There are plans in place to develop a further crossover within the DC TV Universe as well. Reports have been flying that plans are in place for CBS to introduce the cast of “The Flash” on a crossover episode of Supergirl. This will tie the Girl of Steel into the Meta-Powered universe over on the CW. It has a tentative date for May during Sweeps week.

The same reports are indicating that after his guest starring role on Arrow (which was well-recieved by the CW fanbase), Matt Ryan’s “Constantine” will have another appearance within the DCEU. The highest likelihood is that he will appear in Season 2 of Legends of Tomorrow.

The show is going to have a rotating cast of heroes and a season-long mission every year, which will allow the CW to bring in new heroes and allow them to have a trial run in order to see how the fanbase reacts. Also rumored for the next season of LoT is Stephen R. McQueen, who has had a very public campaign to play Nightwing somewhere within the DCEU.

Speaking of Legends of Tomorrow, we have the first full trailer for the series that was released this week. I am liking it, but then again, I’ve been a fanboy of the CW universe for awhile, so I might be a bit biased.

Okay, okay, so I jammed your faces with tons of superhero details this week. What can I say, I’m somewhat of a fanboy. If you didn’t know that by now, at least this post would have given you a hint.

So, I’ll give you some non-superhero things that made me go, “Hmmmmm.”

Entertainment Weekly reported this week that Kevin Bacon is returning to television, shortly after the announcement that his series “The Following” was cancelled. So what is he moving in to? What could make the prodigious Mr. Bacon stay on television?

Why, Tremors, of course. Bacon is going to be reprising his role from the 1990 film, and revisiting the character 25 years after the release of the original movie. UCP and Blumhouse are producing the show, and are currently shopping around for a home.

Last Saturday, Vin Diesel made the announcement: the 4th installment in the Riddick franchise is in the works. His social media pages have hinted that it will be titled “Furia“.

Not only are they working on this, but the same production company is developing a series based on the Riddick universe titled “Merc City“. The show is going to be based around the mercenary and bounty hunter driven culture. No timelines on when this will drop.

In a final bit of sequel news, writing has begun on a 4th Men in Black movie. It appears that the new series is not going to be following the Will Smith/Tommy Lee Jones duo, but rather will be introducing a new female lead. No word right now on whether any of the original cast will be returning.