The Unbridled Power of a Miim: An In-Depth Look at Miitomo

Since its initial release nearly a month ago on March 17th, Miitomo has made some big waves by bringing Nintendo fans their first official app to Android and iOS.

Now met with lack of content, zero replayability, and literally nothing to do, the app is nothing more than a Miim machine, on course with rocks in the shallows.

Miitomo is Nintendo’s first launched in Japan, and made its way over to the rest of the world this past March. Thousands of Nintendo fans rejoiced at the news of the very first Nintendo app: this was history.

Miitomo is a simple social media app meant to interact with your friends through your Miis. Your Mii will ask questions to learn more about you for your friends, and vice versa. The app also allows you to customize your Mii as you see fit by winning or buying clothing in the in-game store with in-game currency.

The more questions you answer, the higher your popularity goes up with your friends. The same applies with the number of times you change your clothing or buy new items: as a result, your style score goes up.

While you’re at it, don’t forget to take a photo of your Mii with Miifoto, a built-in photo creation feature, which I have to say is arguably the best feature of the app. It has released a pandemic of new memes as a result (now being dubbed Miims).

Past those features, Miitomo is basically Tomodachi Life without any of the features, a bare-bones clone — and for that it’s fine. It’s a free-to-play game that’s meant for quick bursts of interactions with you and your friends. It’s all about answering seemingly mindless questions about your existence, or guessing things about your friends, and we’re totally okay with that.

Mobile games are designed for a Quick Pleasure style of gaming where you can do something quick, get satisfaction from your actions, and continue on.

The game’s reward system has daily log-in bonuses, daily objectives, and of course ways to share and showcase pictures of your Mii. These rewards range from the in-game currency of gold coins (that jump over to microtransactions) to the new Mii Coin, part of Nintendo’s new Rewards Program.

As I’ve said, it does have a microtransaction feature built in, and I am not a fan of how Nintendo introduces it.  To me, it’s designed much like every other game’s platform to entice you to buy. It’s an easy target for children to accidentally hit or the people who live and feed off that need of instant gratification.

With gold coins, you can buy new clothing for your Mii, such as a hot dog suit, cat suit, etc. You can also spend said coins on Drop Games. Early on with your interactions in the game, you are awarded hundreds of coins, and sometimes a few thousand, for completing a task. This reinforces our mental reward system, training us to do and get.

But as this goes on, the coins become scarce, and this will result in players having to dip into their real-world wallets if they want to cash in on those sweet, sweet suits (looking at you, Astronaut Suit).

This is not my biggest concern, as I totally get that Nintendo needs to make money off their app somehow. What is a concern of mine however is the lack of filters and unbridled power of these new “Miims” we’re getting from the game.

Generally I would find this funny however when people are given the freedom to drop an F-sharp in an “E” rated app, this raises an important question: what did Nintendo think people would do with this app? Sure Nintendo put it in their Terms and Conditions not to do it, but when you tell people not to do things, of course they’re going to do it.

Overall, Miitomo is a great app to kill time on, take stupid pictures of your Miis and friends, and answer questions that reveal the deepest parts of your soul. But it still leaves me wanting more from this other than a Miim machine. It’s not even Wednesday. 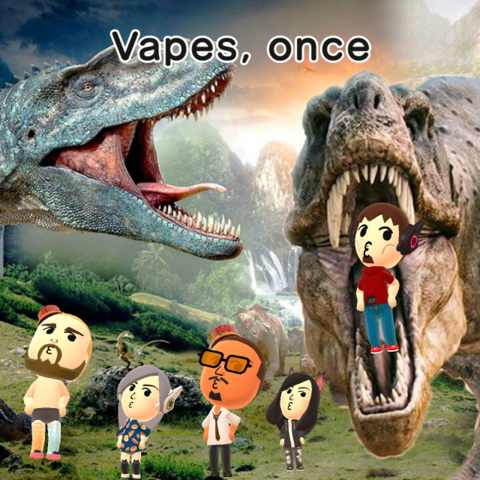 Steve Noel is a Senior Editor for AYBOnline.com, Team Lead for Streaming & Video Content, and Producer/Host of the Level One Scrubs Talkshow. When he’s not working behind the desk, you’ll find him spending time with his cat, Jeff Bridges.