The Hitchhikers Guide to Pokemon Go 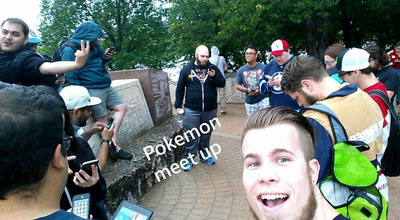 July 7th, 2016. A day of reckoning that the Internet will remember for a long time. That was the day that Pokemon Go was released to a “soft” launch in Australia and New Zealand. I say “soft” because it wasn’t very long after that, that the rest of the world got their hands on it, myself included.

With the server issues finally starting to vanish, and more countries getting legit apps on their respective mobile marketplaces (looking at you Germany and UK), the full Canadian release feels like it’s nearly here. Until then anyone that has the app is still using a subverted version of the game, being either an APK or downloaded from an account based in another country. That just goes to show how popular this app has become.

Now that the brief (and totally accurate) history lesson on Pokemon Go is over with, its time to get this ball rolling!

Hello, My name is Quinn Smith (my in-game name is Wilza), and I am here with your weekly dose of Pokemon Go for Winnipeg and the surrounding areas for AYBOnline. We’ll go over things such as local meet ups that are planned, general tips and tricks, and other fun and interesting things that pop up as time goes by.

Meet ‘n Greet
We’ll get things started with our first segment, Meet ‘n Greet. This segment will be dedicated to interviews with community members, talk about meet ups and anything else that has to do with the community in general.

So start this segment off, I’ll talk about Tuesday evening’s meet up at the Forks as it was the largest one I attended. As everyone in the city should know by now, there is an amazing spot by the bridge and close to the star gazing pit. Three Pokestops that are close enough that you can easily stand in one spot and milk them for items like its going out of style in 1999. For the better part of 3 hours, there were around 90 or so people just hanging out there. To my knowledge, its one of the largest gatherings of Go players so far at a single time in a single spot.

Everyone there was friendly, and willing to help another person out with directions to the location of rare and interesting Pokemon (there were Dragonair and Mankey in the area!). Even with the rain, everyone had a good time. To say that the community this game has produced thus far is amazing, I wouldn’t be lying. I honestly cannot wait to see how much good we can do for one another in the future.

There is another meetup planned for this coming Tuesday at Assiniboine Park, so come on down, and have some fun with the other members of the community! If you’re on facebook, you can RSVP here! Or not. I ain’t your daddy. And for those that don’t like weekday meets, I’m 100% sure that there will be places to go next weekend, so keep an eye out on all the pages dedicated to Pokemon Go in Winnipeg!

Catch ’em All
Our segment next segment, Catch ’em All, is dedicated to helping everyone catch every single Pokemon. So pretty much anything goes here when it comes to locating and collecting.

The first bit of interesting news here will be definitely more recent in terms of its newness to the internet, but it’s still handy. So everyone’s favourite fluff ball Eevee has 8 different evolutions, of which only 3 are in Generation 1. There has been speculation on how to guarantee to get one evolution over another, and to try to prevent getting multiples of say Vaporeon, while not getting any Jolteon from those pesky Eevee’s in your inventory.

There was speculation originally that the special move (the ones with the blue bars next to it) that your Eevee came with would give you a particular result, which has since been debunked. As it turns out, rather than praying to the Pokegods and hoping for the best, you can actually just do something really simple; Just rename your Eevee before you evolve it to one of the following: Rainer for Vaporeon, Pyro for Flareon, and Sparky for the lovely Jolteon. If you’re sceptical, check out this thread from Reddit.

Professor’s Notes
In our final segment of the week, Professor’s Notes, we’ll cover anything that doesn’t quite fit into one of the other segments. It may also just become helpful tips and tricks.

And for the first set of Professor’s Notes, I’m going to talk to you all about Battery Life. Pokemon go is a monster in terms of power consumption, so if you follow these simple tips, you should be able to squeeze some extra life out of your phone.

First and foremost, Turn AR mode off when you are catching Pokemon. Yes, it’s super cool to see the real world behind you as you’re catching your 100th Pidgey, but it eats more power turning your Camera on and off than you actually realize. So turn that ish off pronto. To do that, there should be an option on the top right of your phone’s screen that you can tap and turn off. This will also help with catching Pokemon as well, so that’s an added bonus! Once that’s done, make sure Battery Saver is on in your settings. It doesn’t do too much, but its still worth it.

So you know that Niantic Labs uses Google Maps for their location data right? well if you download your local map data, that can save your battery life and data consumption quite a bit, as the app will then be able to use the stored data on your phone, rather than going to Google’s servers for it. Win win!

And finally, our last bit of battery saving advice really isn’t about saving your battery, but extending your time out in the field. Get yourself an external battery. Pretty much anything will do (I personally have a 2600mAh pack from Patriot), but for those long hauls, I’d suggest something close to the 10000mAH range. The neat thing about the larger packs is that they usually come with two USB slots, so if someone else is low on power you can share the love. Others in the larger capacities also have cool extras like flashlights, and solar panels for charging.

And with that, comes a close to our first weekly Pokemon Go guide! Thanks for coming along on this journey, and I hope to see you fellow trainers out there! That said, if you see anything that is incorrect, or have any tips or tricks that you would like to see added to the next one, please leave a comment, and I’ll make sure to look into it!

Quinn Smith is a Contributor for AYBOnline. When he isn’t out in the wild hunting for that blasted Porygon, He’ll be here, sitting on his buttocks. His opinions are his own.