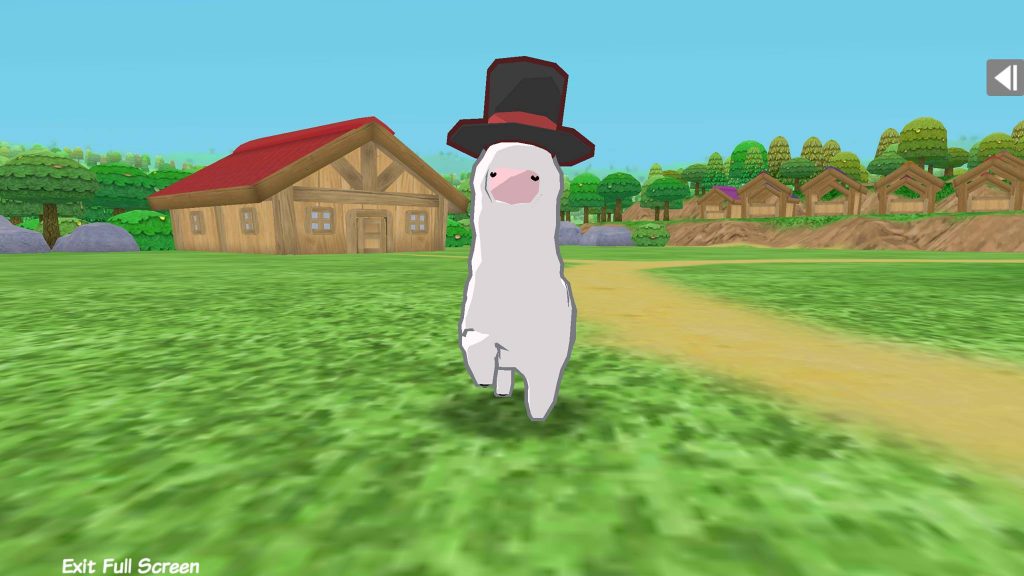 In times of uncertainty, man turns to one noble creature. The alpaca. In the darkest of hours we call upon these floofy guardians to guide us, work with us, and do glorious battle. Yes, welcome to the world of underground alpaca battling. It also has breeding and top hats.

It’s not every day you get told about the secret society that is Alpaca World HD, perhaps the hidden gem of the Android marketplace.

Guided by the gentle hand of Fate, I was brought to the pastures of Alpaca World HD to help bring balance back to the globe by battling and capturing alpacas, breeding them to create the best of their noble kind, and of course dress them as cute as possible, for their next battle may be their last.

Every alpaca has four major attacks, such as Tackle and Mega Impact for physical abllities, or M.bullet or Meteor for magic-based attacks. My assistant Professor Esato and I have discovered that all alpacas have special ability modifiers, and have stats for Magic or Physical buffs or resistances. From what we can gauge this is all random, so, say a Blue Alpaca — as magical and mystical it may look — could actually just be a tanky physical-based unit.

The attack phase starts while you are a solo MLG-Pro alpaca mid-laning on your own and you walk into the tall grass. After a few moments, this triggers like Tumblr an alpaca to come out and battle. Generally the Alpaca with the higher level will go first, but in some cases I’ve seen lower-level alpacas with high speed zip in for a first attack.

During the attack phase, the player has the option to either A.) scorch the Earth and wipe all proof that the enemy alpaca ever existed, or B.) they can dwindle the challenging alpaca’s HP low enough to be courted with a rope — much like in Pocket Mortys or Pokémon, the rope acts as a capture device where the alpaca will try and wriggle away.

Nine times out of ten, as long as the HP is low enough and you are using the correct rope, you will capture it. Rope can be bought from the store in town.

So once you’ve captured your new companion for world domination you get to name them. I’ve called my alpaca squad BeepBeep, Raisin, Peanut and Spinny. However, be careful capturing alpacas! Initially, your farm can only sustain five whole alpacas at a time (none of this “half an alpaca” tripe for Alpaca World HD).  So you’ll need to upgrade your shacks to have up to twenty five interchangeable team members and of course, breeding partners.

So it really boils down to this: how can you get the best possible Alpaca? What makes it the best? Well, this is where things jump into genetics and we go MLG BIOLOGY to solve this.

You have the ability to see a gene chart of all possible outcomes for colours of the alpacas, this is great for your Colour Dex (basically, your logging system for all the alpacas you need) — however, you go in blind for stats. This I feel is a saving grace for these noble creatures, as to do otherwise would hinge on the dark side of biology. Some might wonder if it is morally right for me to play God with their DNA, and I don’t even want to venture there with these cute little fluff nugget THEY ARE All PERFECT EVERY SINGLE LAST ONE.

So if the dopest fight sequences and special abilities like literally calling down a meteor aren’t enough for you, there is an adorable little shop where you can customize your alpaca with everything from top hats to bows. You’ll also be able to buy food to ensure you don’t drop too much health, as well a hotel expansion for when your farm gets too big because, well, alpacas need cool places to hang out when the farm is full.

I would recommend this mobile game to anyone that loves Pokémon, has a biology major, or just loves battling, breeding, and capturing hordes of alpacas.