The Gluten-Free Opinion #5 — The Harrowing Tale Of The Juicer 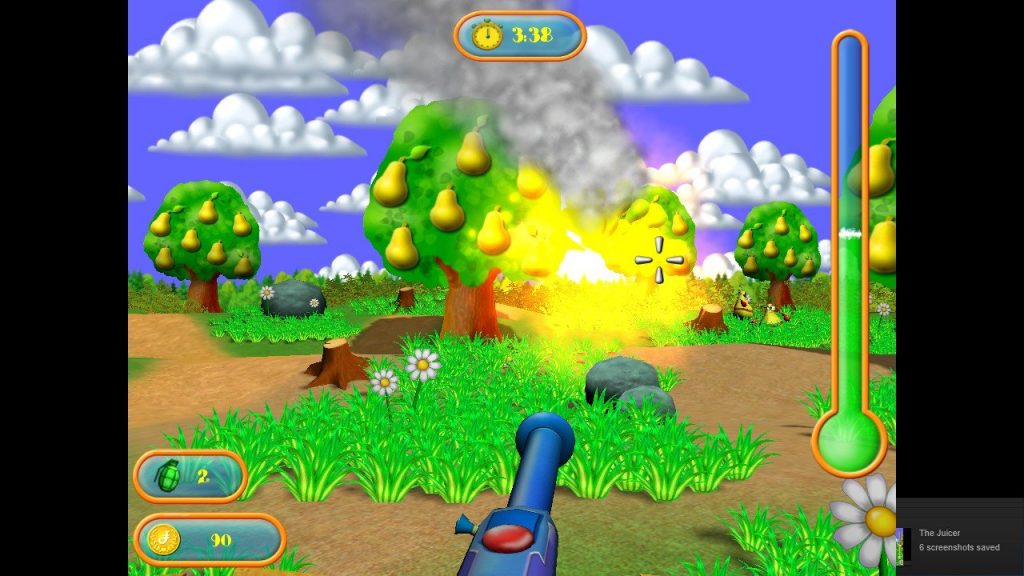 Now, I’m no stranger when it comes to the genre of FPS. I grew up with it, with the original Call of Duty when it was still in Sierra’s hands. Needless to say, I have field experience, knack, and know-how when it comes to combat games. With more recent experience in close combat with Counter-Strike: Global Offensive paired with learning how to use the map to my advantage, something I picked up in TitanFall, when it comes to grinding & holding out to win, I’m a master strategist. (My time with XCOM led me a good way down that path as well… )

I’ve played many games in my day and experienced many challengers, tasks, puzzles and attempted many feats.

But none have ever struck a chord so deep within me as The Juicer. It’s a tale that truly tests a man’s purity and his soul; it’s a game that will make you question your own humanity.

Cleverly masked as a “cheerful shooter”, ‘tis but a ruse for those who have yet to see the secret code laid before them in the game, and seeing the horrors of war that lie within.

What you’re about to experience may be one of the most shocking experiences of your gaming life. This game is on the level of Deus Ex‘s signature conspiracies, perhaps foreshadowing a dark future.

Is this game truly prophetic? We explore all that, and more in The Juicer.

“Whoever fights monsters should see to it that in the process he does not become a monster. And if you gaze long enough into an abyss, the abyss will gaze back into you.”

When I first got word of The Juicer, my train of thought was, “Yeah, eh?”

From an initial look, The Juicer looks like child’s play. From the bright and welcoming colours to the friendly-looking enemies, all seems sound and whole in this story arc; heck, even the animations and art welcome to the player to this world of wonder and mystery.

However, it’s covered in a sinister shroud, as The Juicer is not what it seems.

The story starts like all good horror stories do — a decent man acts out of desperation to save something he loves. In this case, that being his family farm.

In a freak accident, a Pandora’s Box of bad news opens up to greet him, and as if walking through the mouth of Hell itself the player is immediately thrown into brutal combat against his creations.

But hold up, now — a few questions arise.

Why does he have an automatic rifle prepared for this?

Better yet, why does he have an AA cannon placement?

Was this outcome expected? Was it already happening? Has it happened before?

Before the wave-based combat we are given story slides that help us dig deeper into this heart-breaking narrative. As we play, we see more and more of the story, and shockingly, it’s of no surprise — the crops are GMO, or Genetically Modified Organisms.

This only brings up more questions, along with a stark, harrowing truth. Are these the original crops? Or are these humans transformed by the GMO process? With a situation as vicious as this, we can only put together the facts and clues we’re given, and build from there.

To my dismay, my whole GMO/Original Crop theory was quickly dismissed once we were attacked by pears wearing boxing gloves, and flying advanced aircraft. But, in this writer’s humble opinion, the surrealism only adds to the fear.

The story has now turned from a “cutesy casual shooter” to a brutal survival story, which I think goes a little more like this….

Farmer John grew desperate after a failed harvest. On the verge of bankruptcy, he approached a company to help produce GMO crops.

Unbeknownst to him, the serum had a horrible side effect — turning people into what they ate. Thus, the hordes and hordes of anthropomorphic produce, with their various mutations and one single, horrible, inevitable goal: an endless onslaught on John’s farm…

Now faced with defending his farm using what meager supplies are available, you must hold out till the end of this conflict, upgrading your weapons which range from a basic assault rifle, a shotgun, to — for some unholy reason — an anti-air gun. You must use Juice Points from your fallen enemies to do this, along with upgrading armours and your Fence Ranking.

We pieced this puzzle together from the still images during waves. We learned that collecting the juice upgrades the weapons, but is there more to it? Can something can be made, a deterrent perhaps? A cure? We’re not 100% sure, but gauging from the scattered images of the scientist, we can hypothesize that this is no Walking Dead scenario.

Throughout the game, we are introduced to many variants and mutations, from Soldier Cucumbers charging with assault rifles to Boxing Pears, and even knife-wielding pumpkins. Kamikaze Corn, who attempt to break not only your fences, but your spirit. Towering, invulnerable bosses. Air strikes. Pray to the gods you conserved your ammo and grenades, as this game throws curveballs when you least expect them. It is truly unforgiving.

These produce warriors, bent on revenge, have turned John’s farm into a theatre of war. They have waves and waves of troops with weaponry, advanced warships — somehow, they can drive a bus and fly hot-air balloons, and you, a lone farmer, have to defend yourself against your creations, in the hope you can survive long enough to make a cure.

This is a game where the morning never comes. It is an endless darkness, bearing a poignant message about the dangers of GMO food.

While the graphics make the game look like it’s from early 2005, the overall gameplay is in the same realm of current-generation high-end shooters. I’d easily place this in the same ballpark as Call of Duty and Fallout.

The Juicer offers many unique kill streak bonuses and modifications to maximize the damage output from your guns; the player can see bonuses like double juice, grenades, double XP, and reverse shooting. Modifications that I’ve added myself include enhanced clip size, speed of shot and ammo capacity.

Arguably one of the best killstreak bonuses is to slow down time — this is generally good when facing a towering three-story boss or a wave of Kamikaze Corn attempting to crash through your fence.

Overall, I enjoyed my time blasting away over-priced produce, partially thanks to inflation and the crippled Canadian dollar. It’s not on the level of Crysis, but it definitely lands a spot high up on the list of First-Person Hellscapes That Shatter And Remake Me In Their Image.

I would recommend this game to anyone that has enjoyed the Call of Duty series, any of the Fallout games, or really just has a few hours to burn and a vendetta against produce.

For players interested in this challenge, you can find The Juicer exclusively on the Steam store. Purchasing The Juicer now includes free DLC of the original soundtrack.