The 48: An Interview With Kyente 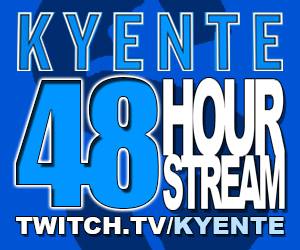 Earlier this week I had a chance to sit down and talk to local streaming sensation Kyente as he mentally prepared himself for his first 48-hour stream. Yes, you read that right — 48 hours of gaming. But why?

It’s because of his fans, his viewers, and potentially you. Kyente is a variety endurance streamer who started out in late 2013; from there he’s built a loyal following and audience which has propelled him through the ranks of endurance streamers and now on the cusp of Twitch Partnership.

So here’s his story so far, why he’s doing this 48 hour marathon, and what it truly means to be a broadcaster in this day and age.

Tell me the story of your first stream.

My first stream ever was done back on December 27, 2013. It was during an event that my brother and friends host called Awesome-thon, where we invite people over to LAN and play together for the entire weekend. I was testing out the stream to see if it would be possible as I had plans to start streaming in the near future. It went alright, I ended up opening a field-tested karambit night (CS:GO skin) which I still have to this day.

The first stream I had when I set up a schedule was in May 2014, where I made a set schedule and was able to be much more consistent for my very few viewers. That is when I truly streamed for the first time. My chat consisted of three people talking; all three are still in my channel today. I played CS:GO and me and one of my viewers convinced an entire server to have knife battles. We even took pictures: http://imgur.com/a/Jnmgz/

Why are you doing this 48-hour stream?

Because my viewers said so. Actually that’s true. Its part of a thing called Salt Lord of the Month, and the Salt Lord can get me to do something as long as it is within Twitch’s Rules of Conduct. Also, I previously did a 38-hour stream in November 2015 to kick off being a full-time streamer, so I had to beat my record sooner or later.

What’s your favourite memory from a previous marathon stream of yours?

I was playing Amnesia: The Dark Descent during my very first 36-hour stream in January of 2014, and my girlfriend and friend went to get me Subway. They turned all the lights off when they left, so I was alone in the apartment playing a terrifying game. Chat kept telling me that someone was behind me and I honestly believed them every time. I actually assumed my friend was hiding in the apartment still and ready to scare me. I grabbed everything off my desk that wasn’t breakable and threw it into the darkness hoping to hit someone. Eventually I called him and confirmed he and my girlfriend were at Subway picking up my food.

CS:GO is my main game so I will definitely be playing that a lot. I will also be playing Hurtworld, Rainbow Six: Siege, Euro Truck Simulator 2, Punch Club and more. I started a list that my subscribers on Patreon can add to for games that I should be playing.

I would definitely be interested in playing local indie games, as I can help review and promote those games for people.

How can people donate and help you get your Twitch partnership?

A big thing a lot of Twitch streamers will tell you is, if you want to support the channel, consider subscribing. Subscriptions are monthly income, and even though donations/tips help a great deal, they are hard to count on. As I am a full-time streamer without a subscription button, I would love for people to help out just by signing a petition so I can show Twitch I truly do have the support to earn partnership status. Partnership with Twitch is just the first step in my career as a broadcaster.

We saw you in a Wonder Woman costume at BaseLAN 29. What are your plans for future cosplays?

I have done two separate Bikini streams, one of which you can see on youtube.com/supkyente.  I have worn a Unicorn onesie and dressed up as a basic white girl for White Girl Wasted Wednesdays, where I get drunk on stream wearing #basic things. Other than that, I randomly dress up as a goof on stream for special events!

What’s a question you ​wish people would ask you about streaming?

This is a question that most people assume is an easy answer: No. It’s just playing video games. But it’s so much more. To create a channel that has a following, you spend 60+ hours a week working on nothing but your stream thinking of new ideas to create the best content and to make sure you are constantly staying relevant.

I have a binder full of terrible and good ideas. I go through them figuring out what will and won’t work. I make sure that my stream quality is as best as it can be. Before I go on I spend about fifteen minutes making sure every single thing for my stream works, so I don’t run into issues. I stream seven days a week just so I don’t miss out on potential growth, because with 1.5 million other broadcasters out there, I will not be the one who gives up. I want to be the best broadcaster out there, and I want the world to know that.

Kyente can be found on Twitch.tv at twitch.tv/kyente, where he’ll be starting his 48-hour live stream today at 11:00 AM CST.