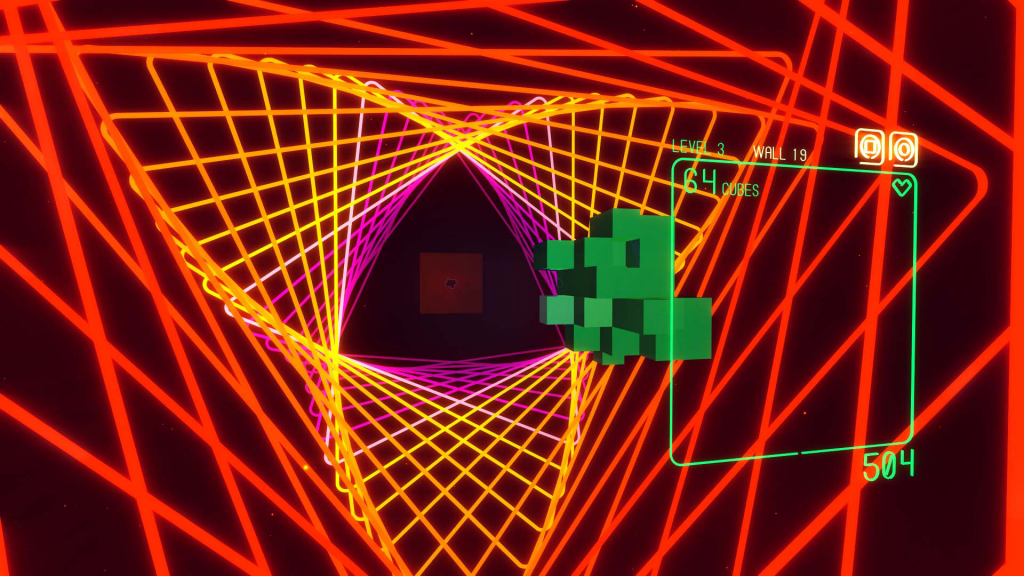 I’m not sure what I was expecting going into SUPERHYPERCUBE. At first glance, it seems like little more than a brightly colored puzzle game with a simplistic premise that locks the player into doing the same action over and over again with little variation. On paper, it seems like the last game that I would ever play, and certainly not something that would strike me as a natural fit for VR. So going in, I didn’t have much in the way of expectations for SUPERHYPERCUBE. I just know that I was not expecting to love it.

For background, games like Tetris or Dr. Mario have never been my thing. I’ve relegated most of those genre of games to the “casual” category, unfairly or not, and have never given them a second glance. When I first got my PlayStation VR, I was eager to dive into EVE: Valkyrie and Battlezone, for those were the experiences that really sold me on the peripheral. I had played Job Simulator and Keep Talking and Nobody Explodes as well, being easy showpieces for how VR could be used creatively, and as an introduction for someone not familiar with the impact of the technology. SUPERHYPERCUBE seemed to me like the pack in Tetris that came with the original black and white Gameboy; a curiosity but only something that I would play as a diversion from the “real” games that would hold my interest. For my part, that was an absolutely unfair judgement, and it only took a few seconds of play for SUPERHYPERCUBE to change my mind.

The premise behind SUPERHYPERCUBE is easy to grasp. Players start with a three dimensional cube, flying through a stylized Tron-like environment. You can look around the cube in three dimensions as it hovers in front of you, the clean UI floating in a flat plane just in front of it. After a few seconds of play, hurtling through the darkness, a massive wall emerges from the darkness ahead, and in that wall is a tiny hole the exact size and shape of your cube. Passing through that hole awards you some points, and you can press the X button to boost through, gaining an additional bonus based on how fast you react, or if you manage to find the correct orientation in few rotations. Simple enough, but things get complicated quickly, as after passing each wall, additional cubes get added in a random design forcing you to reach quickly and rotate your shape to match the shape of the holes in the next wall before you hit it. Each hole will match a specific orientation of your shape, allowing it to pass through cleanly, but finding that orientation in the time allotted is where the challenge comes in.

It is a deceptively simple concept, and one that lends itself to the VR environment exceedingly well. As additional cubes are added to your increasingly complicated shape, players can look around the shape from all sides to try to quickly choose the correct direction to rotate the cube to successfully pass through the hole without hitting the sides. Points are awarded for the total number of cubes in your shape that pass through the hole successfully, plus an additional bonus for speed if you can boost through the hole quickly rather than waiting for the wall to come to you. If you don’t find the correct direction to rotate in time, don’t panic. Whatever portion of your shape that fits through the hole will still proceed, and whatever doesn’t will fall away reducing your score for subsequent walls. Every ten walls increases the level of difficulty, increasing the number of cubes added after each wall, sometimes introducing unique challenges (like rotating walls, which force you to correct on the fly). Even the size of your shape becomes a factor as well, because you literally have to lean around it to see the shape of the hole in the wall that you’re aiming for, then lean back to get a sense of how the three-dimensional shape you’re manipulating translates into a two-dimensional hole in the wall. It makes for some frantic back and forth movement as you puzzle out your rotation while always aware of the dwindling distance to the unforgiving barrier that you’re spiraling towards.

Luckily, you have a few tricks up your sleeve. Successfully navigating walls slowly builds up your Hyperfocus meter which, when activated, slows down time to a crawl and gives you the precious time you need to correct your orientation before slamming into the next unforgiving wall. Each second spent in Hyperfocus depletes your meter however, and it is slow to build up so you have to learn to use it strategically, as a last resort. In addition to Hyperfocus you have a Smash ability, which takes significantly longer than Hyperfocus to charge up and provides a one shot ability to (as you may have guessed) smash the wall to smithereens regardless of your shape’s orientation without losing any blocks. It is essentially an instant win button good for one wall only, after which you have to start building up your Smash meter from scratch. So only as a really, really last resort.

The presentation of the game is extremely clean and stylized. With a minimalistic UI that clearly presents the important information in a clear way, and a virtual representation of the controller that you can look down at at any time to show the meaning of the buttons and the controls to rotate your cubes, even when you’re panicking. Looking at the static images, it’s difficult to get a handle on the environments that you’re moving through; even watching a video doesn’t truly capture it. You need to see the subtle geometric complexities of the levels in VR to truly grasp their beauty in their simplicity. The closest comparison I could give would be the scene in Star Trek: The Motion Picture where Spock (in a spacesuit) flies into the heart of V’Ger, or Dave Bowman’s trip into the Monolith at the end of 2001: A Space Odyssey. While this will be a marketing challenge that all VR game developers will have to face, SUPERHYPERCUBE in particular suffers for it unfairly. If not for the frantic shape flipping and tension that comes with imminent collision, I’m sure that the entire experience would be quite relaxing. In fact, the description that came up more often than any other was “trippy.” 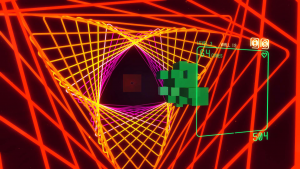 SUPERHYPERCUBE is a great showpiece to demonstrate VR to the first time player. It offers a game that is easy to pick up, demonstrates the effectiveness of VR in a game, and doesn’t overwhelm the new player with an overly complex experience while still offering immense replay-ability. It’s a great game to invite a bunch of friends over and play the VR equivalent of a “pass the controller game”, letting everyone else watch your flailing on the television while you panic in your virtual space tunnel.

I streamed the first hour I played of the game last Saturday, and could easily have done three more without hesitation. Even now, the urge to go back and play some more SUPERHYPERCUBE is strong. It will remain one of those evergreen games that you can always go back to, slowly improving your performance with each iteration. The second you fail, there’s an immediate desire to try again and to somehow go further. Typically in games, failure brings frustration but here it feels like each failure is a necessary learning experience, fueling that desire to go back again and again. Even for someone who doesn’t typically play this kind of game, I found it both satisfying and enjoyable, even as I swore my way through my repeated failures, and I would readily recommend it for just about any PlayStation VR owner.

Jack McBastard is a contributor for AYBOnline. His opinions are his own. He thinks SUPERHYPERCUBE is a great game, however he does not recommend playing it if you are prone to acid flashbacks or were somehow traumatized by TRON.