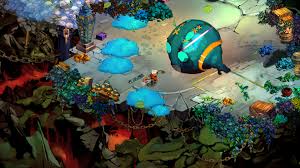 A very exciting day for owners of the PS4! Bastion from SuperGiant Games officially made the port over to the console on April 7th, 2015.

This was the debut title from Supergiant Games. The game is an action role-playing game set in a lush imaginative world, in which players must create and fight for civilization’s last refuge as a mysterious narrator marks their every move.

The game has received over 100 Awards.and commendations since it’s 2011 release

Don’t miss SuperGiants celebration sale! In celebration of the release to PS4 all Bastion Merch is currently 20% off. This is for a limited time so act now!