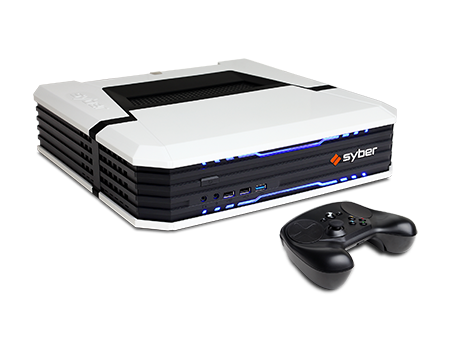 It’s been a long time coming. Valve first teased the Steam Box idea back when it first launched the Steam OS open beta in late 2013. Now, a year and a half later, you can actually put money down on one.

Valve has started accepting pre-orders on Steam Controllers and Steam Link, while both Syber and Alienware have been authorized to pre-sell their Steam Machines with more companies promised soon. The initial launch will have limited numbers available for early release, which has been revealed to be October 16th. The official launch is November 10, and those who miss out on the early release allotment will be able to make their purchase then.

Valve’s new Steam Controller is said to be an improvement over traditional gamepads. The company claims its controller was engineered with high-precision input and low latency wireless technologies, which should improve resolution and fidelity of input.

The controller features the familiar A B X Y buttons, in the same color scheme as Microsoft’s Xbox controller, however located where the right analog stick would be. There is a central button with the Steam logo on it, flanked by buttons on either side, and a single stick on the lower left. Found on the rear are two dual stage triggers, with a digital click at the end of the analog pull. Rather than a D-pad, the Steam Controller has a touchpad on the left with a D-pad imprint. The right side include a touchpad as well.

Valve claims the dual trackpads allow 1:1 position input which are used for virtual trackball, joystick, or steering wheel, and can be programmed to suit any game scenario. Motion control has also been included with the addition of a gyroscope and accelerometer inside the controler, and haptic feedback is delivered by force actuators on both sides.

Each of the buttons is completely mappable to any control scheme desired, and profiles will be shared on the Steam community. A Steam Machine is not required — however, running in Big Picture Mode is. The Steam Controller is priced at $59.99 CDN.

Valve has also opened up pre-release pre-orders for Steam Link. This tiny device will allow current Steam users access to games in the living room without purchasing a whole new computer for the media center, or plugging their gaming system into the TV.

Simply plug Steam Link into the network, and the TV in question. Games can be streamed from the gaming computer located within the LAN and run at 1080p. The Steam Link will also be priced at $59.99 CDN.

If a dedicated machine for the entertainment system is more to your liking, pre-orders for Steam Machines from Syber and Alienware have opened up.

Syber has three options to choose from

Alienware will also have pre-orders — however, Steam’s own link to the page appears to be broken. Alienware’s website lists four different Alpha Consoles which are “Steam Machine Ready.” These systems are built with mobile CPU and GPU configurations, rather than traditional desktop hardware, and range in price from $499.99 USD, to $849.99 USD.