State Of The Game: Guild Wars 2 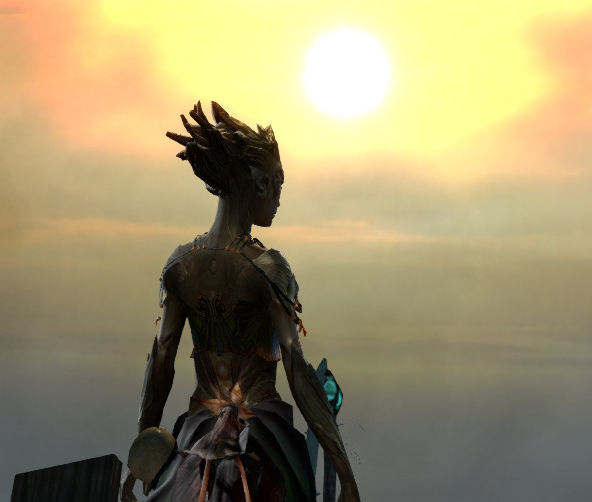 “Jesse, didn’t you just write about how MMOs were dying?”

The headline had “death” in quotation marks, yes. And I certainly raised the question.

But the thesis of the piece was this: MOBAs and eSports have replaced MMOs as The Premiere Game, The Water-Cooler Conversation, The One We Reference First. And that’s a pretty dramatic shift from the previous decade of gaming, when MMOs reigned supreme.

MMO numbers are declining, but they’ll never go away entirely. They’ll just change their model to adapt to new realities. We can see this with the genre’s shift towards free-to-play.

“Okay, so why Guild Wars 2? Why not World of Warcraft?”

Because Guild Wars 2 is an MMO that hasn’t needed to adapt its core business model to fit the new reality — nor does it have WoW’s gravity well of subscriptions — and I find that interesting.

… and also because I actively play the game, and I am weak and human and enjoy writing about things I like. (The good part is, at least you’re hearing from somebody passionate, right?)‎

If you’re not in the beta for Heart of Thorns — and I am not — Tyria has been pretty quiet lately. That makes this a good time to take stock of the game’s first two years or so, and look ahead to what Heart of Thorns could mean for the Pepsi Generation of western MMOs.

So what has ArenaNet accomplished?

Core gamers look at the things they look for in WoW and see desolation. The level cap has not been raised. The number of players seems small. In nearly three years since launch, there has been one major addition of endgame content — Fractals of the Mists, a randomized four-pack of mini-dungeons that level with you as you get better at them — and some minor tweaks here and there. Gearscore-type metrics are completely absent. It looks dead.

Fans of the original Guild Wars look at the things they looked for in GW1 and are disappointed. The cosmetic items in the cash shop feel like a stain on the original buy-once-and-play-forever business model. The knowledge and talent it took to put together a unique skill bar is entirely absent, replaced with a system where your weapon defines half your skills. The removal of the Holy Trinity and the emphasis on active defense has made for pretty same-y builds in PvE and overly-easy gameplay on some of the world bosses. It’s a theme-park MMO. It looks like a shadow of what Guild Wars used to be.

So why do I love it so goddamn much?

I mean, I talked in my column last week about how I can’t stand WoW, can’t stand EVE. By all rights, I should be tremendously bored with GW2.

So why do I love it so goddamn much?

1. The art style is just, So. Unbelievably Beautiful. And the music keeps getting better and better.‎

If you want to keep me playing, make it pretty and make it sound pretty. Don’t ape the styles and proportions of other media, as WoW does: make something uniquely yours and stick to it. Do you, and do you better than anyone else could ever hope to.

And new composers Maclaine Diemer and Lena Chappelle deserve all the credit in the world for taking Jeremy Soule’s original score and improving on it with every new piece. Listen to this, from the climactic battle at the end of Living Story Season 1 (att’n: fellow AYB Online writer Andrew Borton) —

Or, if you need something a little more atmospheric, here’s the signature track from one of the arid, desertlike new maps, the Silverwastes —

2. The Living World story has been brilliantly written.‎

Here’s a neat trick: spend 80+ hours of story content with a player telling them they are The Commander, The Hero of Town, The One Single Saviour Of Everything Ever — and then, in just one content update, solve the classic MMO problem of “Everyone’s The Saviour” by telling the player that, well, it’s been a while, and now they’re just A Commander, A Hero Of Town, and yes there are other Commanders that are doing things but we need you to do this thing, here, because you’re the one that killed the big bad guy a while back.‎

Sound difficult? ArenaNet pulled it off with the Echoes of the Past update last year.

The story has been absolute light-years beyond anything I thought possible in an MMO. They’ve kept up the full voice-acting from the original main quest, and the new characters — particularly little Taimi, an asura child genius with a crippling affliction, and Kasmeer Meade and Marjory Delaqua, together redefining how to write a relationship in an MMO — are a joy to watch.

You can’t play through Living World Season 1 anymore, but here is a wonderful summary. Season 2 episodes are purchasable in-game, so I won’t ruin anything for you.‎

I know WoW’s had it for a while, but the switch over to Megaservers revitalized GW2 for me.‎

ANet’s servers now spawn copies of maps whenever there’s enough players to fill them, making it feel like there’s always at least a few people doing the same content as you, if not dozens at a time. I run into players much, much more often now, and the game feels like it’s full of life.‎

And as for criticisms that Heart of Thorns is too little, too late?

If we’re going to point to past successes as a model for GW2 to follow, it seems like a little more patience is a fine thing, no?‎

4. They haven’t betrayed my trust.

I’ve been playing GW2 for a little over two years now. I’ve got four characters capped at level 80, and I’ve spent a chunk of change here and there in the gem store.

In that time, we’ve seen the MMO industry shift and almost collapse entirely. The old standard of $15-a-month subscription MMOs looks ludicrous now. With every launch, a deathpool starts: “When is it going free-to-play?”‎

And ArenaNet has merrily skipped along, with a business model too good to be true, and not once have they changed it, except to put the game on sale more often. ‎

It’s still a one-time purchase for the whole ghatdamn thing, and then you can buy cosmetic items from the cash shop if you want. Or, you can grind up in-game gold and spend it in the cash shop instead. It’s the most ethical of business models (with their one slip-up being the Watchwork Mining Pick debacle), matched only by Path of Exile and Shovel Knight, and I applaud and thank them for that. It can’t have been easy.‎

So, What Comes Next?

Heart of Thorns will probably launch toward the end of the summer, shaking up the game and everything we know. We’ll see if the new Stronghold PvP can finally cash in on ArenaNet’s promises of a viable eSport within GW2. Everyone will get the option of a new subclass, new weapons, and tons and tons of new content.

Most importantly, it’ll be more of something that everyone thought was too good to be true, skipping merrily along. And that’s a damn good thing to have in the world.

Jesse Mackenzie is the Managing Editor for aybonline.com. He often writes while listening to the gentle hum of Star Trek engine cores. He can be reached at jessem@aybonline.com, and his opinions are his own.‎

guild wars 2 MMO State Of The Game World of Warcraft