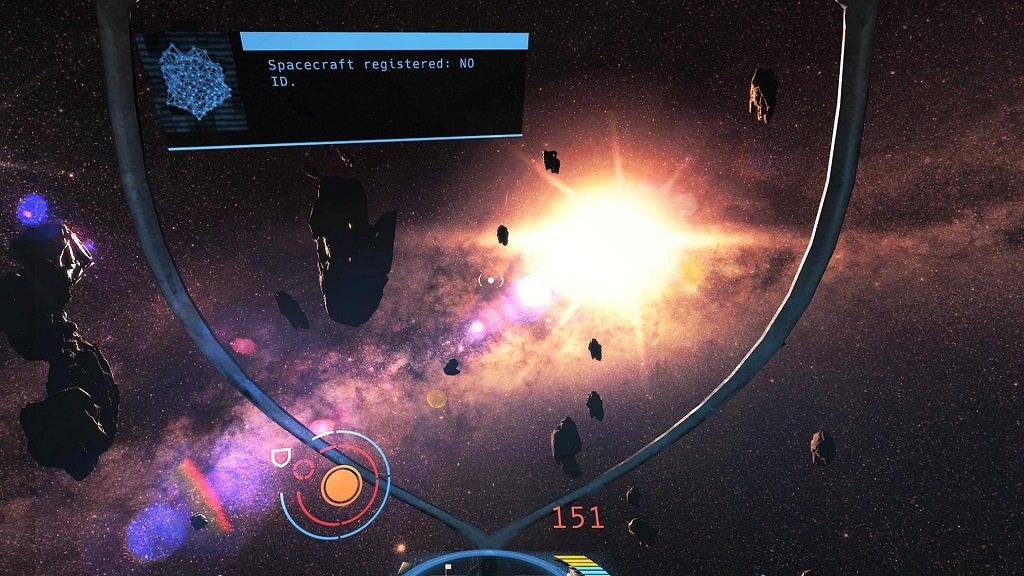 We all know what the real reason that VR technology was developed. It was to realize the childhood dream of geeks everywhere to pilot a spaceship and blow crap up. That technology is now upon us, bringing the depths of space into the palm of our hands. Enter Space Rift, now available for PlayStation VR.

In the action-packed space adventure Space Rift, the gamer takes full control of a veteran pilot and his spaceship caught in the midst of an interplanetary conflict. After endless years of war, Earth has been devastated entirely by a destructive meteor shower, thus forcing humanity to emigrate to Mars and has been surviving under a fragile dome ever since. The organizations WEYSS and PANDORA now have an iron grip on vital water and oxygen, forcing the rest of humankind to live in slavery if they want to live at all. In Space Rift, the player steps into the role of Casey Black, veteran pilot and independent spaceship captain, trying to eke out a meager existence on the edge of civilized space. Unexpectedly, he finds himself caught up in the struggle of a secret group that has taken on the fight for the liberation and independence of humankind.

Space Rift – Episode 1 is the first chapter in an episodic space adventure specifically designed and optimized for VR. The cinematic story paired with the cockpit simulation gameplay and level design is what makes the game unique in this regard. Space Rift – Episode 1 thrills players with a movie-like atmosphere, whose story unfolds in the scripted missions and dialogue. Immerse yourself in the world through intercepted radio transmissions, newscasts and the interaction with the fondly designed non-player characters on the base station, continuously add new important details about the on-going conflict. Not just a VR “experience”, Space Rift is a complete game, putting you, the player, right into the middle the story.

Players can decide which path to take through the story, and through space, piecing together the plot in the way they choose. As they earn money and gather resources, they can upgrade and improve their space ship, evolving it into a trusted partner, not only in connection with the quest to free humankind, but also in the course of exploring the whole galaxy.

Jack McBastard is a contributor for AYBOnline. His opinions are his own. He is a sucker for space flight simulators, and longs for the day when he can again launch off the deck of a Terran carrier and annihilate his enemy in VR.