Oh Canada, one of the best countries in the world, and one that I am very proud to call home. Canada, and more specifically Calgary, is the home of the developer Vivid Helix, developer of a little game by the name of Semispheres.

And to think, it started as an entry into the 30th Ludum Dare contest.

Selected to be a presentation at the #madewithunity Showcase at Unite Boston, a spot at GDC’s Indie Megabooth, and winner of the Digital Alberta Awards Gaming category, Semispheres is a single-player co-op puzzler where you simultaneously control two characters in connected parallel worlds.

The game is a mix of mind-bending puzzles and coordination challenges, testing your skills as you maneuver and dodge sentries. Later levels introduce the co-op aspect of the game, where the two sides will need to work together (sometimes simultaneously!) to progress.

It also includes an interesting story between a boy and his faithful robot, which is presented in a comic-book style. 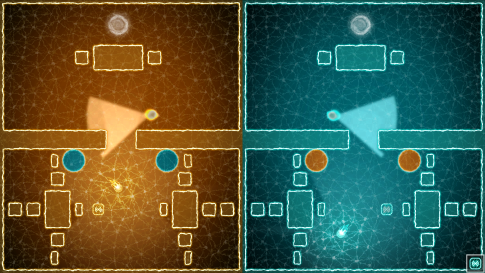 Semispheres will finally be coming out of Steam’s Greenlight program this April, and will be playable on Windows, Mac and Linux!

Quinn Smith is a Contributor for AYBOnline.com. His opinion is his own.