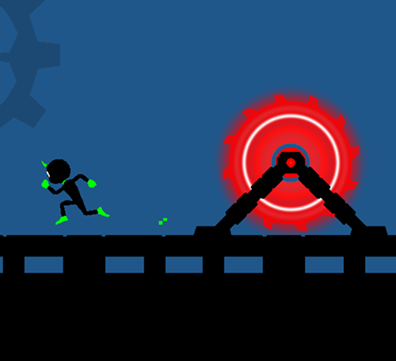 Simple Spy is precision platformer game from Kodari Games, available on iOS and Android mobile devices. Similar to the likes of Super Meat Boy and Dustforce, it comes out with its best foot forward, with excellent music, decent menu designs, and a simple minimalist aesthetic (hence the title). What it brings to the table in presentation however, it loses to frustrating on-screen controls that simply don’t fit a nail-biting precision platformer like this.

With over 60 levels and multiple characters to choose from at just over $1 CAD, Simple Spy would be a great game – if it weren’t for the touch screen controls. One of the key difficulties developers have faced in delivering console-style gaming to mobile touchscreen devices is providing tight controls. 2D action platforming games often require unforgiving precision and finesse the likes of which a touch screen simply cannot deliver.

Simple Spy is no exception. It features four arrow buttons situated across the bottom of the screen for running left and right, rolling, and jumping. Playing on the Samsung Galaxy Note 4, I found that my thumbs would often touch the back button or the multi-window button, pausing or exiting the game mid-jump (although I acknowledge this likely isn’t an issue on the iPhone or iPad). However, I also often found dead-zones in the controls, where I would go to press a button and it simply wouldn’t register, resulting in a half jump, or sliding into a trap.

This is a common problem for “hardcore” mobile games. In fact, it’s a well-researched field, and there are a few possible solutions. With a dynamic virtual thumbstick for movement, and buttons or swipe controls for jumping and rolling, Simple Spy could give the player a bit more precision and finesse. Ideally, I’d like to see bluetooth controller support added to the game, or even a PC version. For you mobile developers out there, Gamasutra has an awesome article on exactly this problem, titled “A Guide to iOS Twin Stick Shooters.”

To their credit, Kondari Games have already tried implementing a fix since the game’s release. They now offer four varying sizes of buttons for the controls. This helps solve another problem that plagues many mobile games – on-screen controls blocking the action. However, despite solving that problem, the core issue simply can’t be ignored, and it really gets in the way of the experience overall.

I’d love to recommend this game – I really would. With bluetooth controller support or a console/PC port, I would absolutely recommend it at this price. With dynamic thumbstick controls, I would gladly give it another shot and add an addendum to this review. However as it stands, I can’t recommend this game.

If you’d like to check it out for yourself, you can find Simple Spy for Android and iOS devices on the following store pages: