Review: Antyz: A Time Odyssey on iOS and Android

Antyz: A Time Odyssey is a free to play (F2P) puzzle action game on iOS and Android, from developer DNA Studios. In Antyz, Earth has been completely engulfed in ice due to global nuclear war and climate change. You play an ant who is digging toward the center of the Earth where it is still warm enough for his colony to survive.

Think A Bug’s Life meets The Matrix, Lemmings, and The Incredible Machine. The goal of the game is to dig down through the dirt and snow to reach the end of the level – but if you touch the rocky sides, your poor little ant will die and you’ll have to start that map over again.

Along the way you’ll encounter baby ants, and you have to solve puzzles to rescue them. Using the touch screen you can activate switches, or melt away snow to create openings so that the baby ants will slide into your digging path. However, your snow melting ability is limited, and you only ever have just enough to complete all of the puzzles that require it.

Later on in the game you’ll encounter hazards such as timed doors, lasers, teleporters, and rolling spike balls. The baby ants aren’t harmed by these traps, and in fact sometimes they are required as part of the solution to save the little guys. These puzzles require a sense of timing and planning, and might take you a few tries to get right. Usually there are about 5 baby ants to rescue per map. This video gives a good overview of the type of gameplay you can expect from one of the more challenging maps:

There are over 100 levels in Antyz, with 99 core levels stretched over two unique eras, and additional secret unlockable levels throughout. Each level takes about 1 to 2 minutes to complete, but most of them will require multiple attempts before you find the right solution. There are plans to expand the game to include additional eras ranging all the way back into Earth’s history, but as it currently stands Antyz will probably already last you at least a month or two playing it on the bus ride to work or school.

”But Jake,” I hear you saying, “if Antyz is free to play, won’t it gouge me for microtransactions with some sort of in-game currency?”

Crystals are used to purchase cosmetic items, player upgrades, and it can be used to give you advantages in the gameplay, such as previewing the level to predict the puzzle solutions, or refilling your abilities to make the game a little easier. In playing Antyz, I have never found it necessary to buy the upgrades, preview the levels, or refill my abilities. In fact, the base game feels balanced, and I found myself earning more crystals than I could spend.

You can earn currency in four core ways:

I should also note that there is also an option for a one-time charge that unlocks all content immediately. This one time charge is $2.99 USD (about $4.00 in CAD currently) and as far as the amount of content you’re getting in Antzs already for free, it’s not an unreasonable cost. 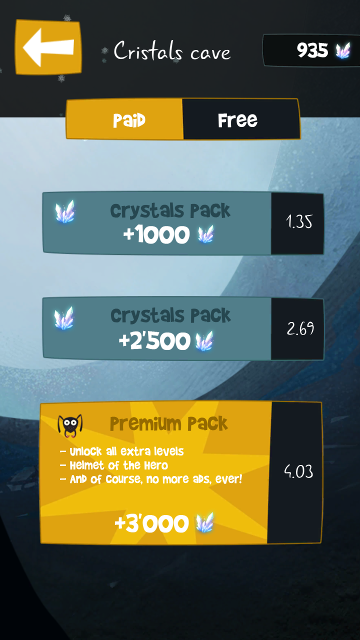 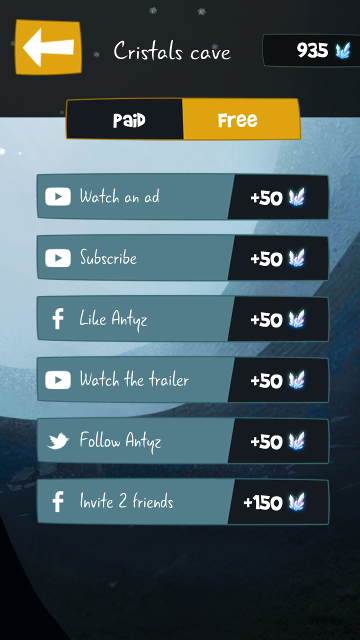 The way you collect Crystals to buy cosmetics and upgrades feels more akin to Rockband’s rock gear store. You need to play the game to earn the new items and levels by purchasing them or completing challenges, but earning the new items is not a requirement to play the core game.

The upgrade system has the added bonus of being educational. Most of the upgrades and cosmetic items you can purchase are based on real species of ant. The item descriptions include factoids about the different species, and I actually learned a surprising amount about different types of ants by playing this game!

This game has decent presentation. The graphics are a little simple in the menus, and the menus can be a bit clumsy, but the gameplay graphics are smooth and run very stable. I’m reviewing this on a Galaxy Note 4, and the only time I have noticed hiccups in the game is after taking screenshots for this review. That said, the high frame rate and smooth graphics, as well as the physics-based puzzle solving do make this game a bit of a battery hog.

The story is told through animated cutscenes, and on text blurbs found on artifacts throughout the game’s level selection screen. The blurbs for these artifacts paint an effective picture of what happened to cause the global catastrophe that sets up the premise for the game, but they do also feature some broken English. These small errors are more charming than distracting though, and given that developer DNA Studios is based out of Switzerland, they are completely excusable, miniscule errors.

Overall, if you’re a fan of puzzle action games such as Lemmings or The Incredible Machine, and you’re looking for a game to occupy your daily bus commute, I highly recommend giving Antyz a shot. If you’re a parent looking for a clever game to challenge your young child, I would also recommend this game with one small caveat: although the currency system is fair there is the chance that your child could accidentally spend a lot of money through in-app purchases. Make sure not to tie your device’s Google Play account to your credit card.