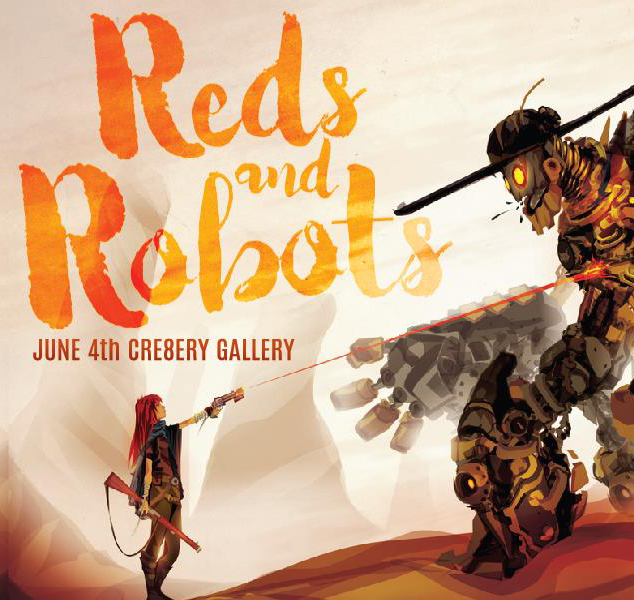 If you’ve been to C4, Ai-Kon, Key-Con or any of the numerous geek related conventions in Winnipeg, you’ve probably encountered Justin Currie’s work. Under the name Chasing Artwork, he has booths set up at all the shows.

I’ve been a fan of Justin’s work for a number of years now. I can’t remember when I bought my first print, but between my girlfriend and I, we have at least 10 of his pieces. The unique look of the fractal design that he uses is very interesting, and the artwork is often relating to popular video games, which is obviously a plus with this crowd. It’s been interesting following his work as he gains more popularity.

When I found out that cre8ery gallery and studios was hosting a gallery exhibition of Chasing Artwork, I knew I had to go, and I’m glad I did. Seeing the art in print is one thing, but seeing it on canvas makes it much more impressive. There’s a number of interesting pieces that have been put on display, including an original sketch from Cassie and Tonk, one of the books Justin has illustrated. The sketch has been framed and is for sale for $10,000!

I’ve had the opportunity to talk to Justin a couple of times and he’s always been very pleasant. He really appreciates the fans that he has, and if you buy something from his booth, he signs everything in front of you. Those who buy a book generally get a custom character drawn inside the cover too. He seems very humble, and appreciative of the following he’s curated. While I was speaking to him, I asked what he recommended for frames of his prints. Even he acknowledged it is difficult, but noted that Micheal’s has a frame that is the correct size.

I didn’t manage to get a shot of him creating any custom artwork, as I hadn’t had a chance to ask if it would be alright before he was done. I did, however, get a shot of Thomas Bartlet doing the same for a fan who purchased a copy of his book, Infinitum.  Thomas is the writer of Cassie and Tonk, and was in attendance to promote his work as well.

When I asked Justin how he thought the event was going, he said he was very pleased with the way things turned out. It was a lot of work to put together; a lot of planning goes into making a themed show, but the turnout was fantastic and he seemed to be having a good time. He did say that he’d do another one… in a year or two, heh.

Thursday night was the grand opening of the gallery, and Justin was there in person to sign prints and books, however for the rest of the schedule it will just be his work on display. The gallery will be on display for the next two weeks – hours are Tuesday through Friday, 12-6pm and Saturday 12-5PM. Prints of the gallery pieces are available to purchase (not all of his work is there), and most of the framed artwork is also for sale with the exception of a select few.

If you’ve never seen his work, or if you have and consider yourself a fan, do yourself a favor and go check out the gallery in person. The pictures I was permitted to take don’t do it justice, and I left many out so I don’t ruin all the surprises for you.

cre8ery galler and studios is located at 125 Adelaide Street in the exchange. Same building as Assent Works maker space.