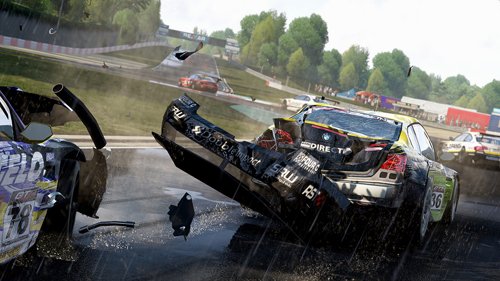 There is no type of game that gets me as excited as a racing game. I’ve been

a fan of the genre for as long as I can remember.

I know that my first encounter with a racing game was in early childhood. My dad had an old Intellivision console, and a pile of old games. My favorite of the bunch by far was Auto Racing by Mattel.

Games have come a very long way in the 36 years since Auto Racing was released. Long gone are the days where you have to use your imagination to believe what you are doing is driving a car.

These days, there’s racing simulations of all sorts. Game makers have been competing for years to create the most detailed, realistic and believable cars, and driving experiences.

In recent years they have come damned close too.

Assetto Corsa on PC steps up the game significantly as well. Pair these modern games with the latest in racing wheel peripherals and it’s easy to get lost in the game.

Slightly Mad Studios doesn’t think the games available today are good enough, and they have gone out to do it better. Project Cars is the result of a crowd-designed racing game.

The community has been helping shape this game for over a year. Early backers of the project were granted access to the game, and feedback has been used to hone the experience. The result is said to be the best physics, most detailed cars, and the most accurately reproduced tracks of any game. Let’s not forget, the game supports up to 45 opponents. The most ever in a racing game,

Project Cars is also prepping for the future, supporting resolutions of up to 12K (triple 4K display, drool!)

Poised to take on the best of the best on each platform, this could be a very interesting title. I can’t wait to get my hands on it. I’ve been following the game since the announcement alongside the XboxOne reveal 2 years ago.

Will you be picking this one up? Let us know in the comments below.

I know I’ll be getting it, and you can be sure I’ll be telling you what I think when I do.