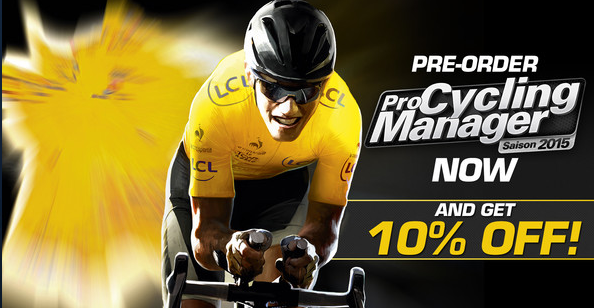 Alright comrades it’s your pal Orion here to tell you what’s hot this week and what to throw your bottle caps at.

With all the E3 shenanigans happening this week (and I recommend highly checking out our comprehensive coverage from the team!), not only would a developer need to be bold to release a game, but extremely bold. E3 is arguably one of the largest gaming shows, second to PAX. Think of this as the conference finals in [generic sport here] and we’re leading up the finals at PAX. Shit’s getting real, trailers are dropping, fans are losing their minds and of course, us here at AYB Online are strapped to our computers like its a damn digital holiday.

With the Steam Summer Sale going on I found it hard to find anything new to let you know about coming out this week. However I did find one, the boldest game on the market literally today, here it is, none other than Pro Cycling Manager 2015.

Pro Cycling Manager 2015 allows you to become a legendary director of the pro cycling circuit from the comfort of your home. That’s right. Live out your dreams from the comfort of your wheely chair. Get your life together and become the legend you were meant to be. I’m calling you out. Dust that keyboard, oil your mouse and get our your sweatbands as you  Participate in over 200 competitions, 550+ stages all with the final goal… the Tour de France. If THAT doesn’t make it real enough for you, well, get ready to cycle like the ultimate badass as you take on recruitment, personnel management, finances, and contracts with riders and sponsors. That’s right, it’s time to drain bank accounts and create super-soldier cycling legends,  straight-up leave nothing to chance, as we all know thanks to Sarah Connor, there’s “No Fate But What We Make”.

Your role will be equally important during the race as it is on the keyboard, as every decision will be crucial in your bid for victory! If that’s not stress-inducing enough and pushing you to your mental limits, how about taking on 90 teams to make it all the way? Bust out your two-wheeled hell machine made out of the finest of metals and take the crown.

The 3rd-party DRM allows you to activate the product on 5 machines in total. If that’s not enough to get you hot and bothered, I really don’t know what will. Here’s the trailer, eat your heart out and get ready to collect your Steam cards:

Now if you can handle anything else after that I invite you to lose your literal, metaphorical and digital shit at the announcement of The Elder Scrolls: Legends. I know this is not a new release title, HOWEVER, my love for the series will be heard. YOU HEAR ME JAKE!? MY LOVE WILL BE HEARD.

Last night at E3, our bodies were all teased with the announcement of the latest Elder Scrolls game. They started with the content announcement for ESO, which I’ll admit looks badass. Tell me who doesn’t want to go to the Orcish homelands? Well the correct answer is anyone with proper sense…because we all know how Orcs can be.

But it all led up to this: The Elder Scrolls: Legends.

From what we’ve seen, this looks to be a head-to-head competitor with Blizzard’s Hearthstone. The two companies have really paved the way in the fantasy RPG/RTS realms with both their creative works. For the first time it looks like they’ll be going head to head with this new and exciting chapter in Bethesda’s book… or shall we say, scroll?

I look forward to getting more information about The Elder Scrolls: Legends and seeing what Bethesda can bring to the table in the genre of competitive/strategy card battle games. So here it is, the official launch trailer.

So until next week when we presumably have more games coming out, or I find some more rare Pepes, this is Orion, kicking it. As in leaving. I’m not actually kicking anything. …Regardless, you can find me on the Nexus!

Orion, Content Editor and self-proclaimed Field Correspondent. A lover of cats, buttons, and fresh bread, he spends 30% of his time finding new and creative ways to cook macaroni.