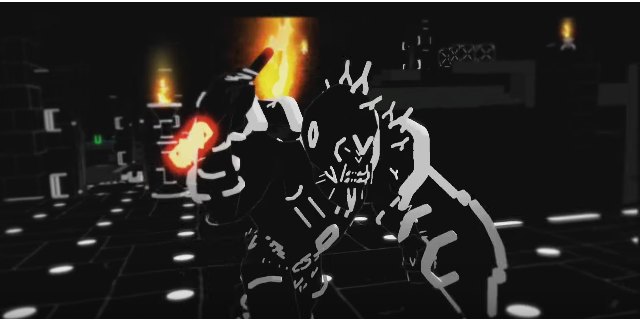 Staying with some of my coverage of the PlayStation Experience, I’ve hand-picked a few titles I want to talk about. The first of which is one that I am rather (and very excitedly) interested in.

BRUT@L is that game. It’s being made by Stormcloud Games, who are based out of the mystical land of Scotland, and they are looking to bring a classic look to the current generation.

The art style of the game is reminiscent of games from the mid-1970s, inasmuch as the game is based on ASCII art. But that’s about where the graphical similarities end, as there are a ton of fantastic looking 3D effects thrown in for good measure.

You’ll be able to pick one of four characters at the beginning of your playthrough — your typical Mage, Warrior, and Ranger, with Amazon thrown in for good measure. Each character has its own features, and will level up and gain skill points that you can use to customize them to how you play.

The Mage and Warrior play as you would expect, with one being your typical long-range magic user, and the other being the brawny brute that does asinine close-range damage. Both the Amazon and Ranger fit somewhere in the middle of the two. One of the unique features of the Ranger, for example, is the fact that he starts with a shield. And it’s not just for blocking; you can Captain America the crap out of it.

One of the nice things about how the game works, is that you aren’t stuck being, say, a staff-wielding wizard. If you find a weapon that you really think is cool, you can equip it, and level that skill up to use it better, and more effectively.

What about loot, you’re asking? Glad you asked! While it is RNG based, you’ll be collecting gold, and Letters, referred to in the game as ASCII. The ASCII are the building blocks for every weapon in the game. There are normal ASCII characters, and then there are enchanted ones, which augment the damage type(s) you can do. Collecting loot is rather easy too, as you can either kill all the mobs on the floor, or you can go all Link on the pots and other non-wall items scattered among the various rooms. 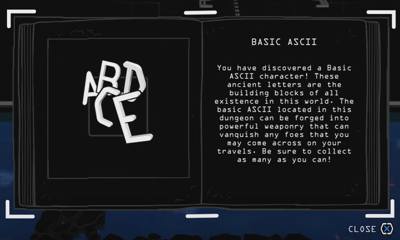 The world in which you will be fighting in is procedurally-generated, tossing this into the company of other roguelike games such as Blizzard’s Diablo series, the Dark Cloud games, and one of my favourite pick-up-and-go-games, Rogue Legacy. You’ll also have to climb 26 floors of this dungeon, which undoubtedly will get more and more brutal as the game goes on.

As with other roguelikes, you have one life; that’s it. Unless, of course, you find an Altar to the Gods, and sacrifice your hard-earned gold. But it’s not always a guarantee that you’ll get an extra life. So play smart, as you never know when you’ll be fighting a boss!

The game also supports couch co-op, which is a nice feature. The only thing I’d caution you about is that friendly fire is on, so if you hit your ally, you’ll actually hurt them, and vice versa. As for other community features, it has a built-in Dungeon Maker, so you can devise the ultimate death trap for your friends and the global community alike!

BRUT@L will smash its way onto PS4 in early 2016! I’ll be catching you all down in this wonderfully realized and retro world then!

Quinn Smith is a Contributor for aybonline.com. He likes 8-bit-styled games a bit too much. His opinions are his own.