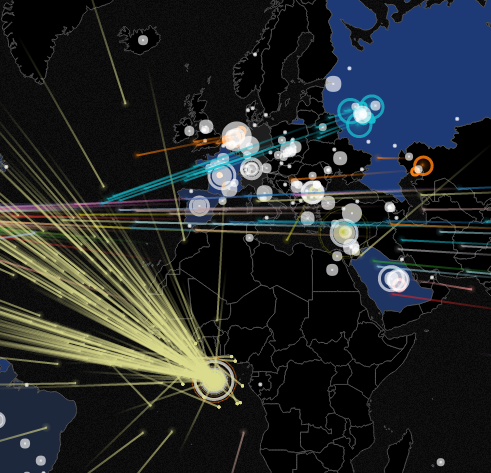 Seriously. Right-click > Install Game as soon as I get home.

Norse’s IPViking Live tracks DDoS attacks from botnets and displays them in real-time. The effect is hypnotic — soothing and worrisome at the same time.

From the About section on the page:

The attacks shown are based on a small subset of live flows against the Norse honeypot infrastructure, representing actual worldwide cyber attacks by bad actors. At a glance, one can see which countries are aggressors or targets at the moment, using which type of attacks (services-ports).

It looks like it’s primarily an advertisement for Norse’s other products, but it’s still incredibly cool to see. And I’m definitely still reinstalling Defcon — a 2006 cult classic from Introversion that I can’t recommend enough — when I get home.

Jesse Mackenzie is the Managing Editor for aybonline.com. He often writes while listening to the gentle hum of Star Trek engine cores. He can be reached at jessem@aybonline.com, and his opinions are his own.