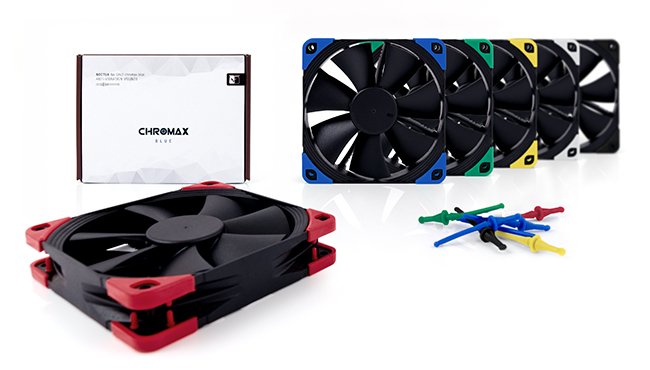 Noctua today officially introduced its chromax line of anti-vibration parts that give users the option of colour-customising their fans to match individual build colour schemes. Available in red, blue, green, yellow, black and white, the chromax versions of NA-SAV2 anti-vibration mounts and NA-SAVP1 anti-vibration pads are ideal for colour-coordinating Noctua’s black industrialPPC fans with other components and popular build themes such as all black, black & white, black & red or black & blue.

“The introduction of our redux and industrialPPC product lines marked a first step towards offering fans that fit in well with the typical colour schemes favoured by today’s overclockers and enthusiasts”, says Roland Mossig (Noctua CEO). “With the new chromax line, we’re taking another step by allowing users to colour-customise their fans with red, blue, green, yellow, black or white anti-vibration parts.”

Whereas the new chromax edition NA-AV2 anti-vibration mounts fit all types of Noctua fans, including redux models, the NA-AVP1 anti-vibration pads fit all NF-F12, NF-S12A and NF-A14 models and are ideal for customising fans of the black industrialPPC line.

“When we introduced our industrialPPC series, we mainly had industrial clients in mind, but the fans have become surprisingly popular among overclockers and enthusiasts,” explains Roland Mossig (Noctua CEO). “The new NA-SAVP1 kits now give them the option of matching their iPPC fans to various build themes by simply changing the supplied anti-vibration pads for chromax ones.”

Prices and availability
The manufacturer’s suggested retail prices for both the NA-SAV2 and the NA-SAVP1 are EUR 6.90 / USD 6.90. The following variants are currently shipping and will be available shortly: