Alright fam, time to buckle in and sort your lives out. Orion is back with some hard hitting truth and I can only hope you are mentally prepared for the chaos that is about to hit your cranium like a railroad loaded with watermelons.

There will be no mercy.

Here are your new release games. May Charles Darwin have mercy on your soul.

Time to prepare for your semi-annual purge of steam items, because there only comes a perfect moment like this once. That’s right – that one perfect moment in your life, when the stars align, your hands get sweaty… it’s when a lineup of new release games make you go, “Perhaps it’s time to sell my stash of steam cards and  Mann Co. Supply Munition Series #91.” Just to see how much you make. Give or take an hour and you’ve made $5 USD (aka $10.75 CAD). Now how do you spend this?

Well, welcome to the wilder side of New Release where I, myself, have sold various steam items, made $7 and bought ALL of this week’s new release games that I am featuring. I didn’t even break the $3 mark, so prepare for some edgy madness and hopefully this brings greater attention to what goes on Steam. Let’s get this train wreck on the tracks, shall we?

First up, we have a game that will throw any evolutionist’s theories on life out the door, and make you question if Charles Darwin was just batshit crazy. A game that would arguably be the soul successor to Shrek III, Corey In the House, and Jurassic World. 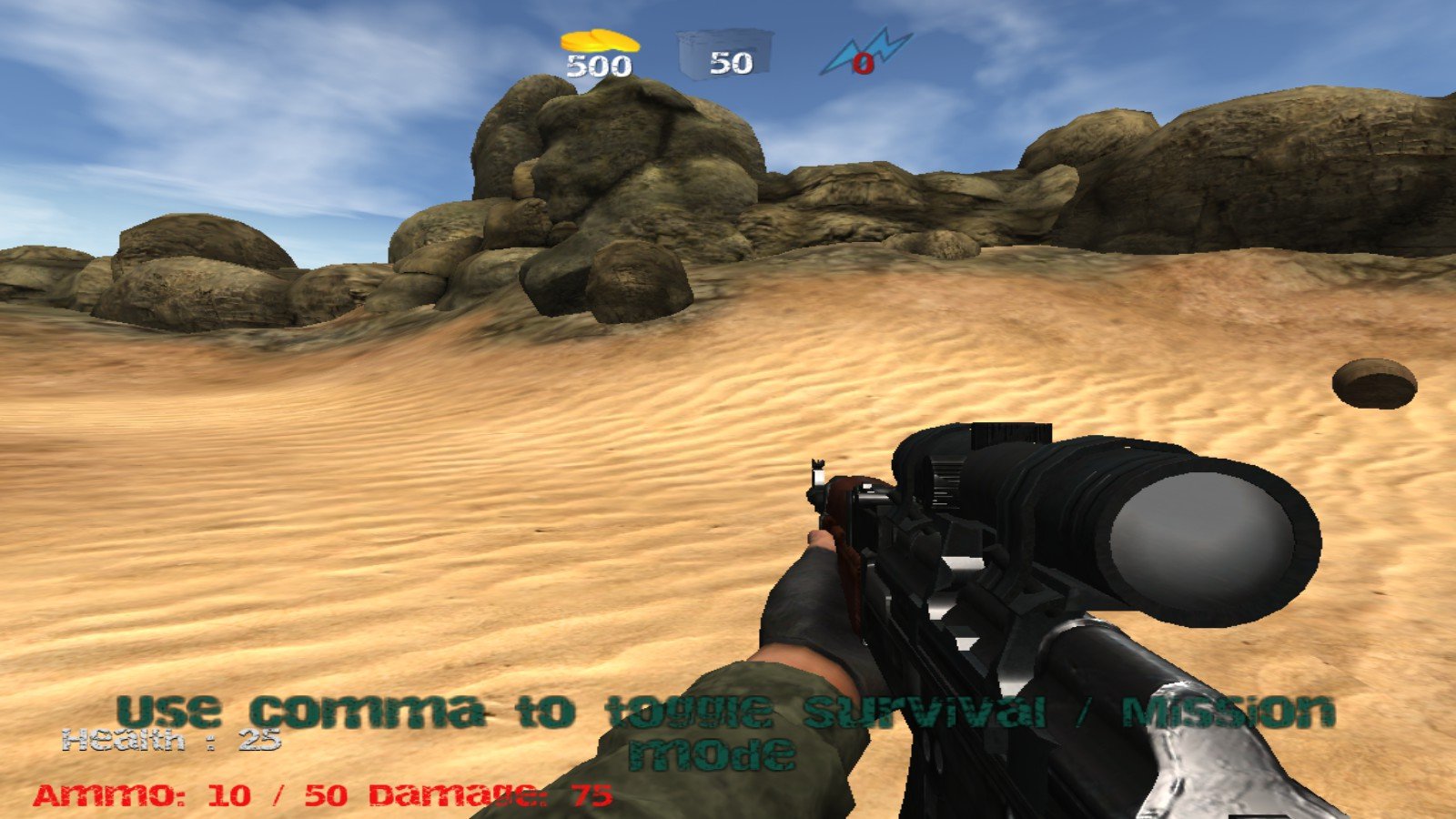 If you hadn’t guessed it from those hints alone, here it is! It’s none other than Dinosaur Hunt: Africa Contract

Now, I get it: not everyone wants to play a scary dinosaur game, loaded with no-scope madness, adrenaline-pumping action where you don’t know if you’re going to survive the next five minutes.

Dinosaur Hunt: Africa Contract does exactly what is says: You hunt dinosaurs in “Africa”. Well really, an “artistic interpretation” of Africa.  Imagine this if you will: this game immediately brought me back to an age of classic shooters, an age before pre-regurgitated bland Call of Duty. Yeah, we’re talking Classique, that good good Call of Duty I and Call of Duty II United Offensive. The gun handling I felt mimicked that quite well, as well the scope and bolt action of said sniper rifle.

The running around, blasting off shots from the stock sniper rifle and pistol just felt so classic. I truly enjoyed this. 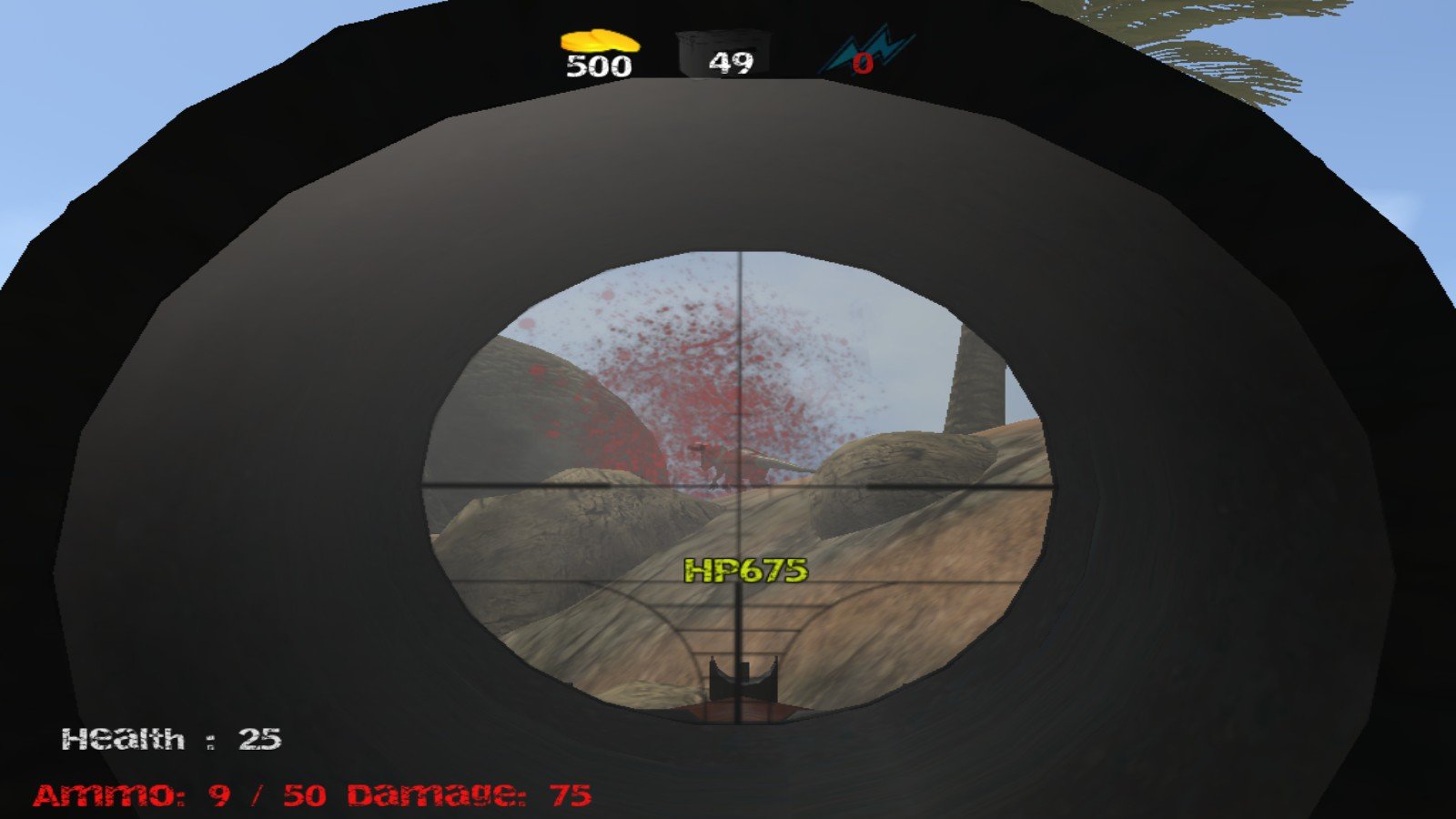 However, there was one thing I did catch that made me go “Woah, that’s pretty advance for an Indie game.” What I am talking about is the ‘sniping’ would sometimes go into a special mode, which we’ll just dub now “DINOScope”. It mimicked to a tee the slow-mo sniping that is unique to the game series Sniper Ghost Warrior.

I know for a fact that this slow-mo effect is no easy feat, so I have to tip my fedora to the developers as this is definitely worth some solid recognition. This is not sarcasm, I am genuinely impressed by this feat. 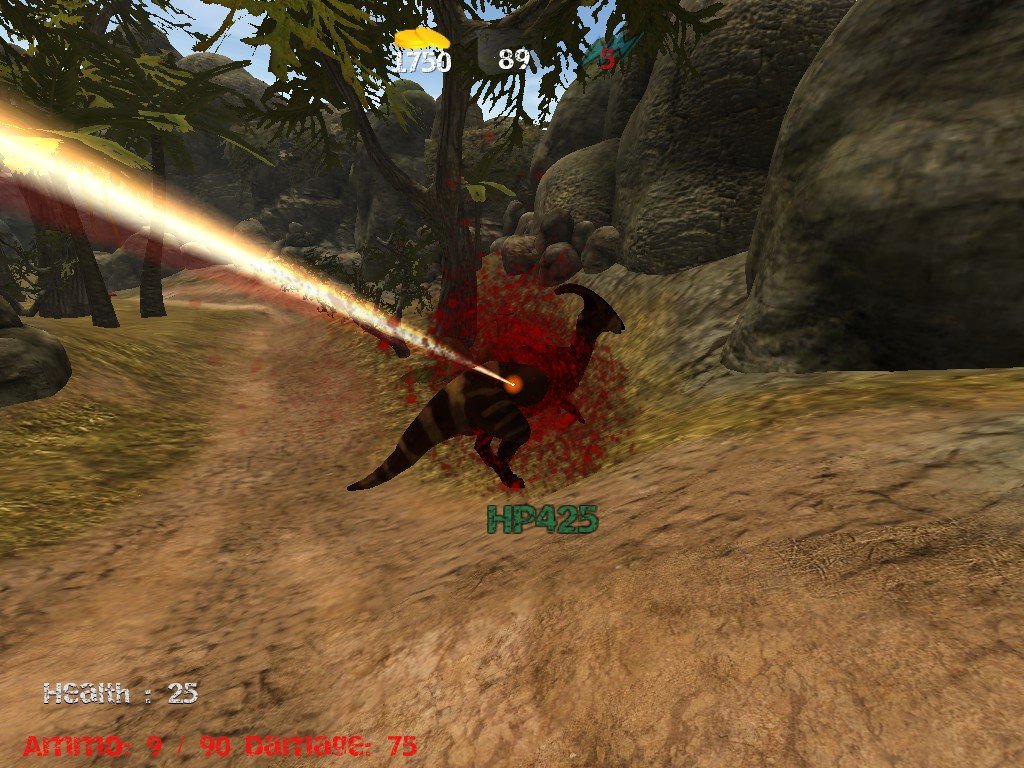 Jumping a little further into this hellscape, I ran into several issues. The game would not allow me to interact with the menu, starting up the game was a task and trying to buy ammo was harder to do than actually hunting the dinosaurs. 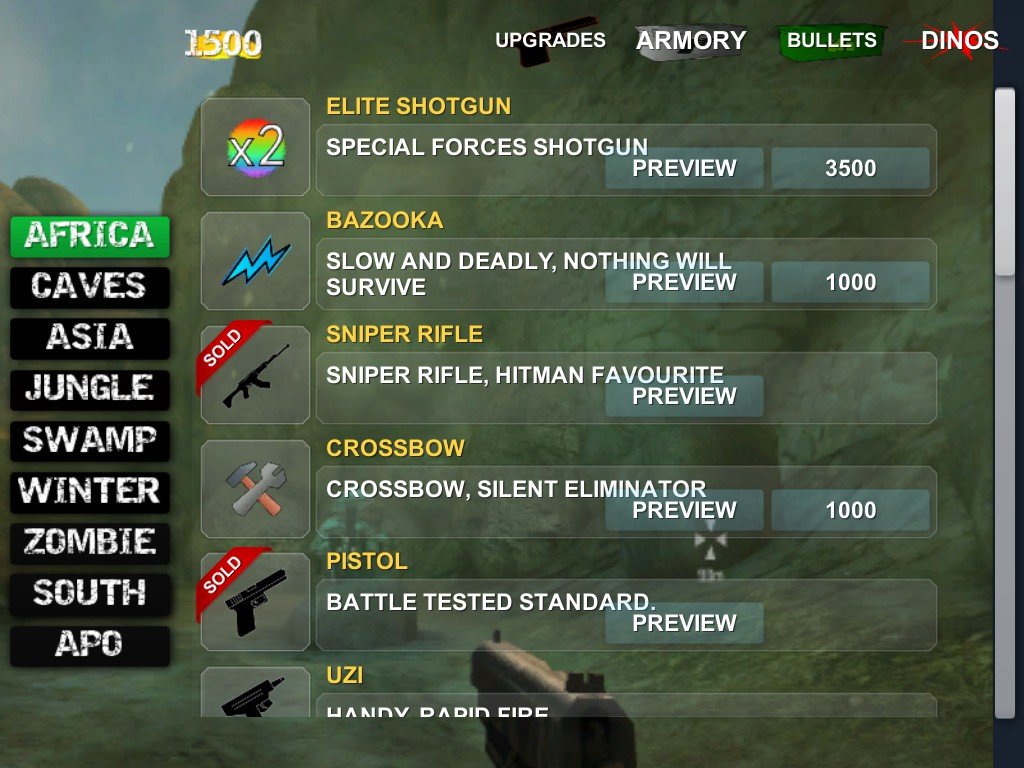 When trying to interact with any of the buttons such as upgrades or ammo, it would not respond. I found this to be super frustrating. However, it turns out playing the game windowed is what allows the game to run at full capacity. I found only in this mode was I able to actually buy ammo, upgrade weapons and actually change worlds for more exciting hunts. To be fair, I left a note for the developer on their stream page to report the bug so it could be fixed for future users and players.

As we know, I’m a scatterbrain and we should get back on track about speaking of gameplay. The game is very straight forward: You choose your weapon. At the start you have a Sniper rifle and you can purchase more down the road like a shotgun, crossbow or even an RPG. What you do is hunt the ultimate predator dinosaurs.

When entering all these worlds, dinosaurs are randomly generated across the map, so for all you know the dino could be a whole world away, like I personally experienced in Asia, or in some cases, two steps away ready to attack.

When you enter into combat, I cannot stress enough, do not take your opponents lightly. Again if I must remind you, they are dinosaurs: they can take more than one bullet, and boy will they charge very, very quickly.

I had an incident where I was chased down by a brontosaurus as I ran out of ammo, and we all know the true Level One Scrub that I am, so I couldn’t buy any ammo or do any last minute upgrades, thanks to the fact that I was enjoying the game in full screen. *SHAKES FIST*

There was only one thing I could do: knife fight.

I eventually overcame this epic battle of the titans. It was no easy feat, trust me, this battle raged on for about fifteen minutes of running in circles and by knifing the dinosaur to death, yet barely I came out on top. 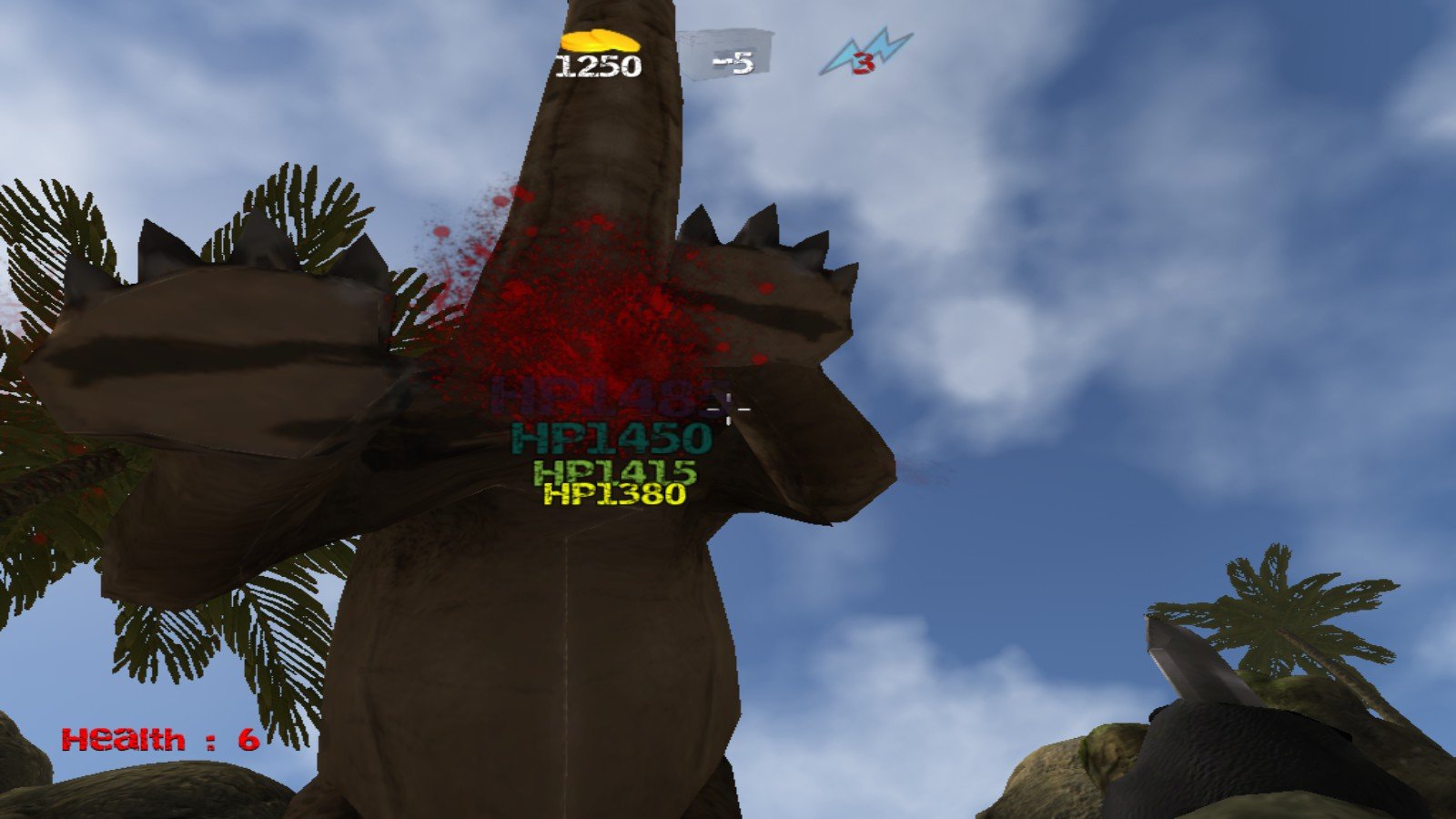 There is a sense of strategy, of course, when taking this game on. As my dad never said “If you can’t shoot it, outrun it”. In other words, you’re gonna have to use the world around you to defeat these beasts. For some levels like Africa, the world is wide open, so running may not be an option.

However, levels like Cave do give you an advantage with rocks laid out everywhere. The larger dinosaurs get caught on them during their pursuit to end your existence. 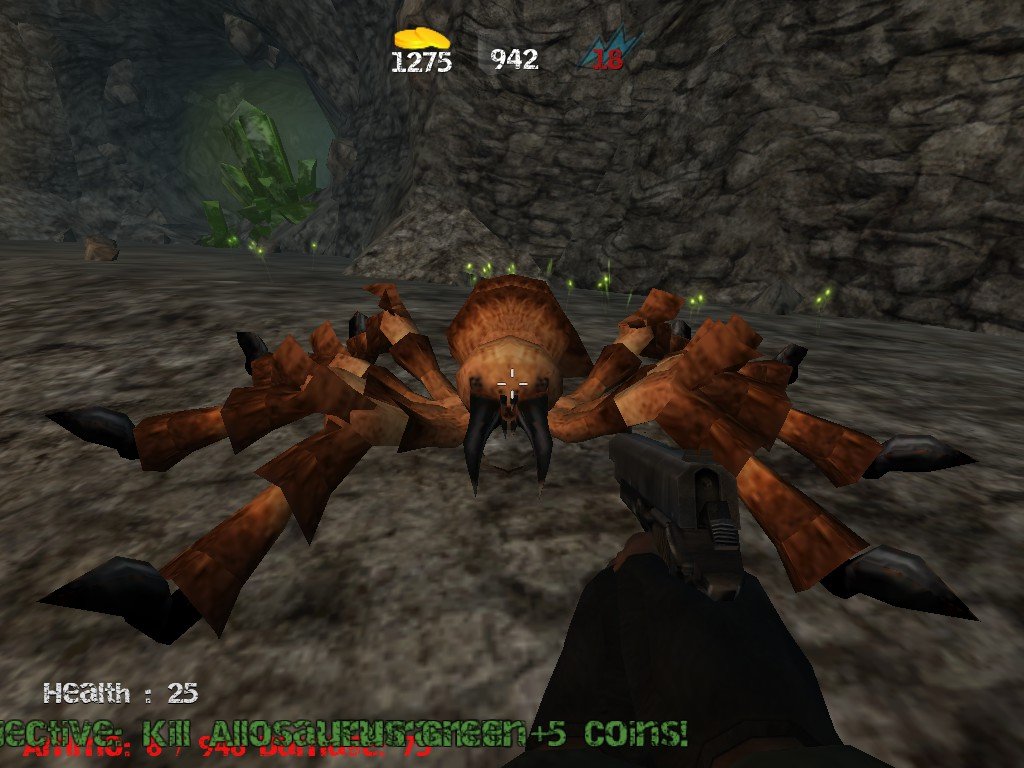 And then there’s going to be worlds like Asia and Winter that are just absolutely broken. In Asia, you can literally stand in one spot, not move but shoot and the dinosaur will either walk off the edge of the earth, or the dinosaur will try and pursue but due to the level, terrain, and buggy programming, the dinosaur will be stuck in a running loop trying to get you, but never will.

Winter, well, it’s just a train wreck altogether. I do appreciate the effort in design that was put into this level; however there are no dinosaurs here. I can only be left to assume that this is some cruel joke on a level of mastery we could all appreciate, or this is unfortunately a bug in the game. 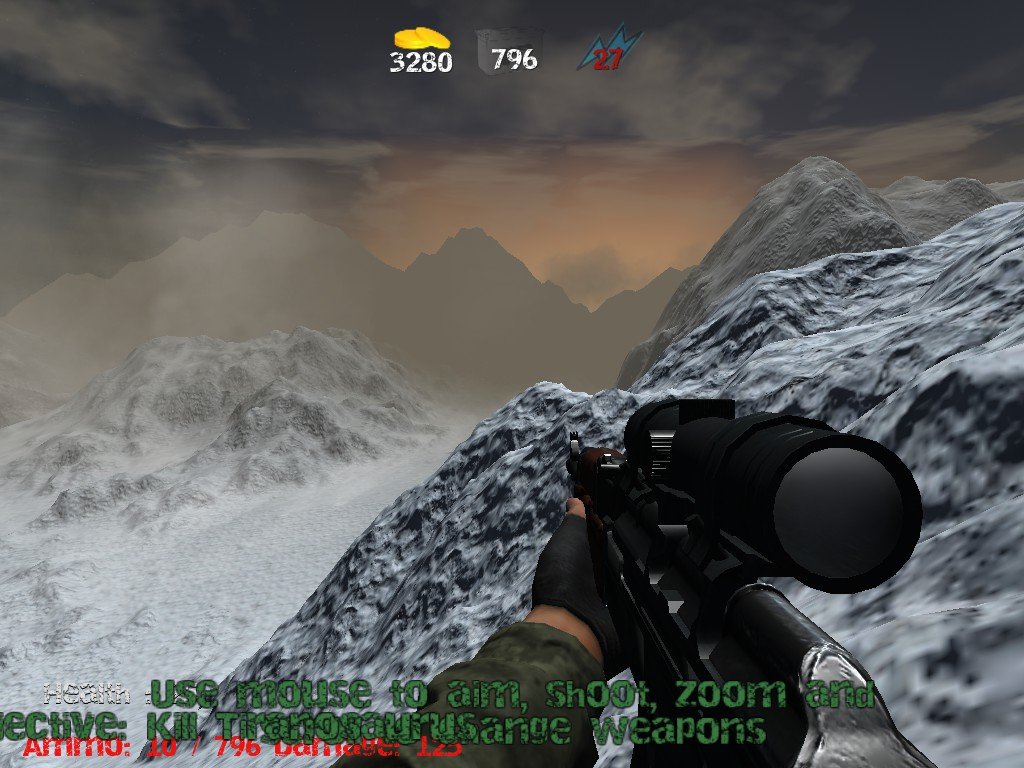 Regardless of this fact, the most I could do is run up mountains and no-scope all the snow.

In the end, reflecting on my time, yeah it was worth my $1.04, and yeah it was a fantastic time waster as I was waiting for my team to get ready for some Heroes of the storm. I can only recommend this game in conscience if you understand these few things:

Now that you have a full understanding of what you may/may not get yourself into, we can close this up by saying I hope you have a Dino-myte of a time reading and sharing this.

And lastly, our last game that I managed to buy with selling some steam cards, a game for the truest and purest of casuals, it’s TimberMan.

If this game doesn’t destroy your insides from stress-inducing game play, then look out ulcers; you have a new opponent in town.

Timberman is the latest Android/IOS games to port to the Steam market place. This game, however, is nothing short of a challenge. It tests your skills of a true keyboard warrior. With several gameplay modes such as Single Player, Multiplayer (Local Splitscreen/Online death match) this gave has definitely earned its $0.96 I spent on it. 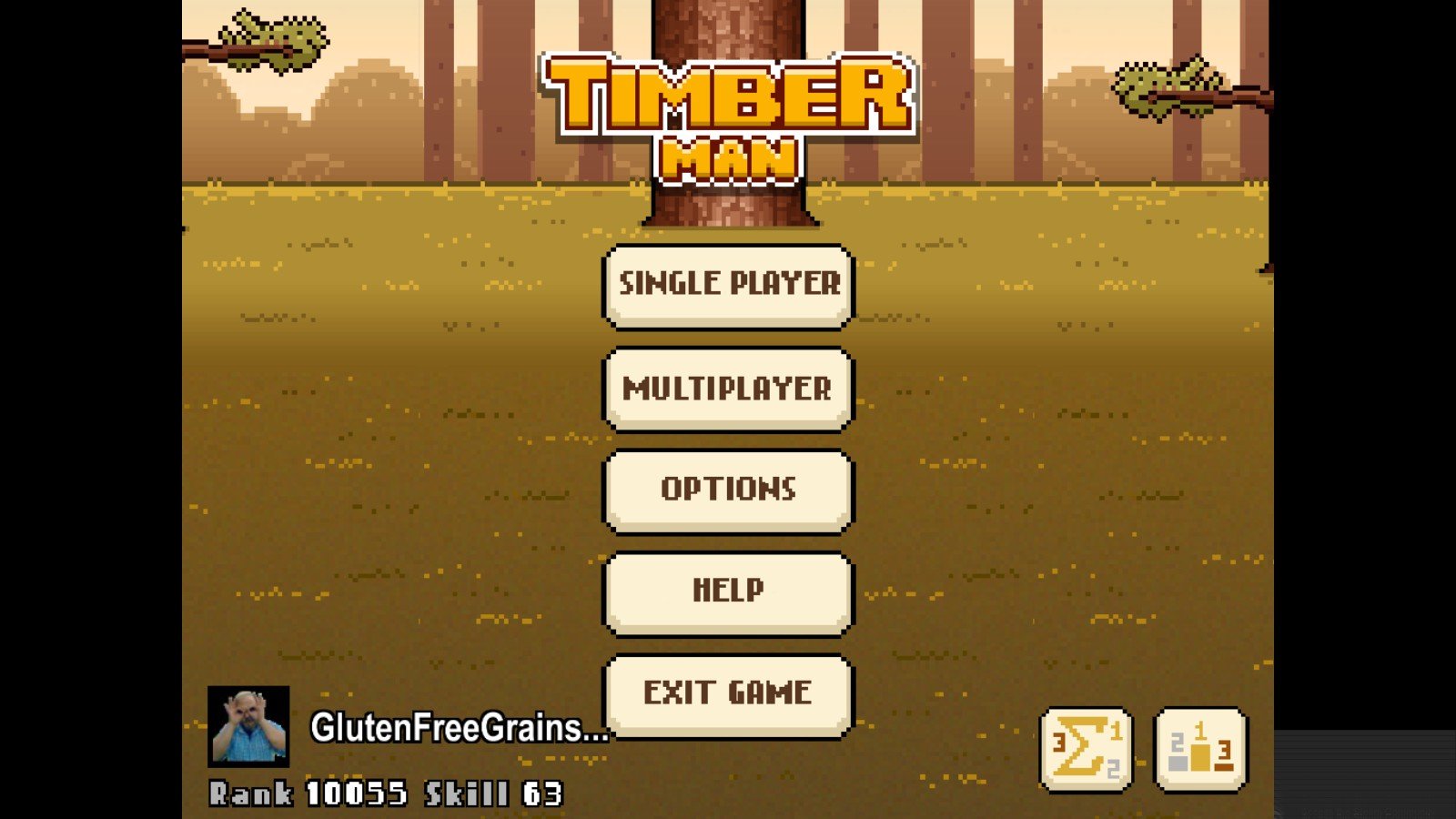 What really caught me was the multiplayer. I found this to be a definite selling feature of the game because let’s face it, not only are you going to absolutely destroy the single player and unlock everything, you’re gonna want to get online and destroy everyone in sight.

For a quick, casual game, I can confidently recommend this game from the new release to you, but I am not responsible for any stress-induced illnesses you may incur. You’ve been warned.

So that pretty much wraps it up for this week! I hope you enjoyed this week’s selections. Let me know in the comments below what you think, will you be picking either of these up? What games have you bought by selling games on the steam market place?