With PAX Prime unfortunately behind us, I find myself sitting here and reflecting on my time on the show floor. When I look back at where I was, I was glued to the MSI booth watching the MGA’s Heroes of the Storm tournament cheering with the crowd, taking it all in.

The eSports experience was unlike something I’ve felt since BaseLAN at C4 this past year, surrounded by an excited crowd cheering, screaming, losing our minds as glorious mid-lane combat turned into absolute chaos. It was beautiful to be surrounded by fellow gamers and eSports enthusiasts, and it was the wildest gaming experience I’ve had in a long time

Needless to say, MSI put on one hell of a show this year at PAX Prime, and I can’t wait to tell you all about it.

Reflecting upon the show floor and really taking it in, I can say MSI had the best-built and -ran tech booth at this year’s Prime. Featuring some of the best eSports has to offer, with StarCraft II and Heroes of the Storm live at Masters Gaming Arena — which, for those who don’t know, is MSI MGA (Masters Gaming Arena), a globally renowned eSports tournament formerly known as MSI Beat It. This is the sixth annual tournament held by MSI. The 4-day Grand Finals was held this August in the United States during PAX Prime, which we were able to experience live. This is where the best gamers from all around the world competed for over more than $200,000 USD in cash prizes. Pretty unreal!

There was also an exclusive area for jumping in with the pros, dubbed “the eSports experience”, and of course they had an unreal set-up, with all the new video cards, boards and all the other exciting stuff MSI has coming down the line. 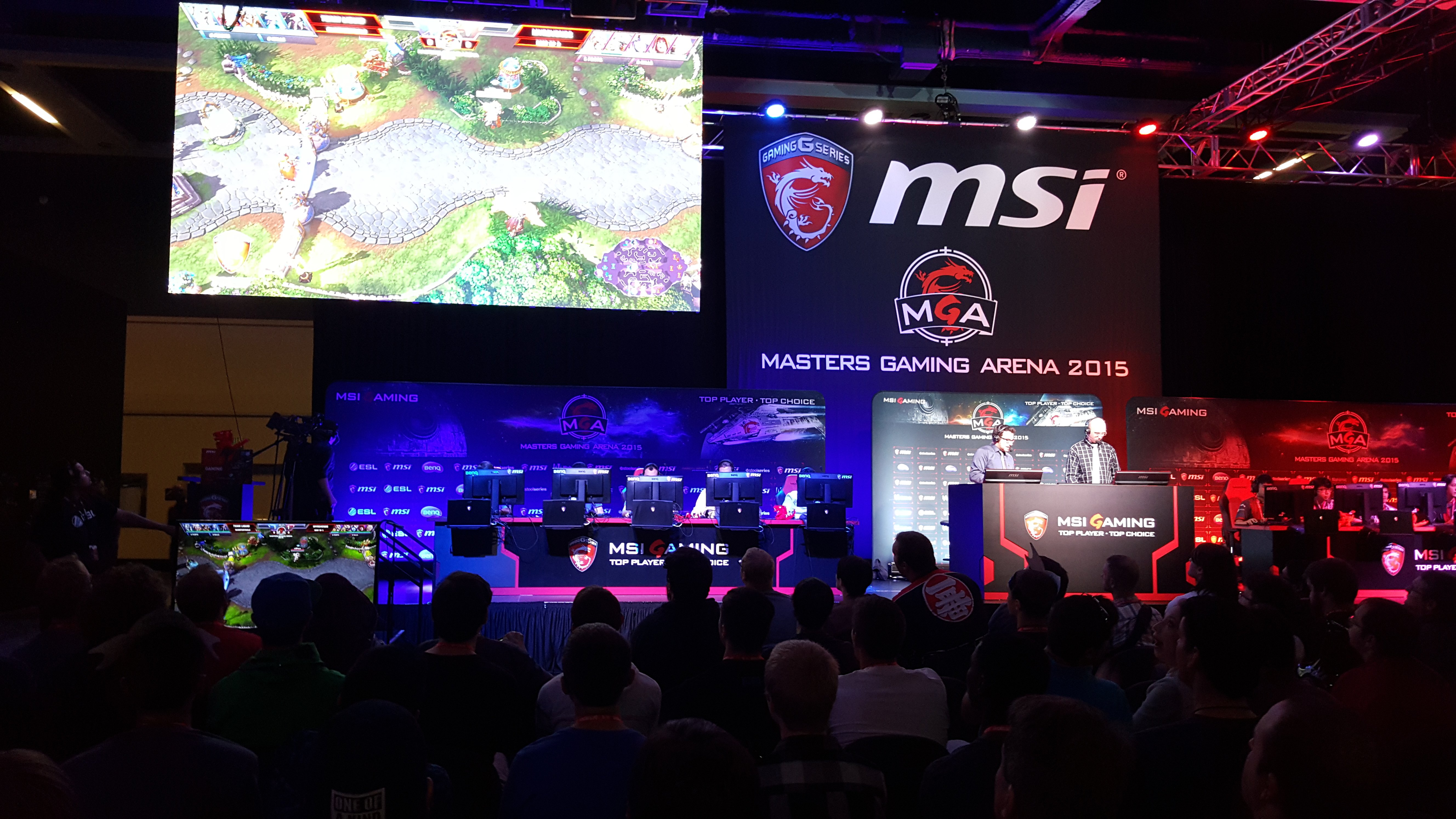 I had an exclusive interview with Sam Chern, Senior Director of Marketing of MSI, where he shared in his excitement of all these new things coming.

We talked about our past PAX experiences, and connected with our love for PC gaming, he shared with me that this is MSI’s third year having a major presence at PAX, however this is the first time they’ve separated the space into two parts, the first part was a the MGA tournament space featuring Heroes of the Storm and Starcraft II. The second part was dubbed “The eSports experience” featuring League of Legends and CS:GO. 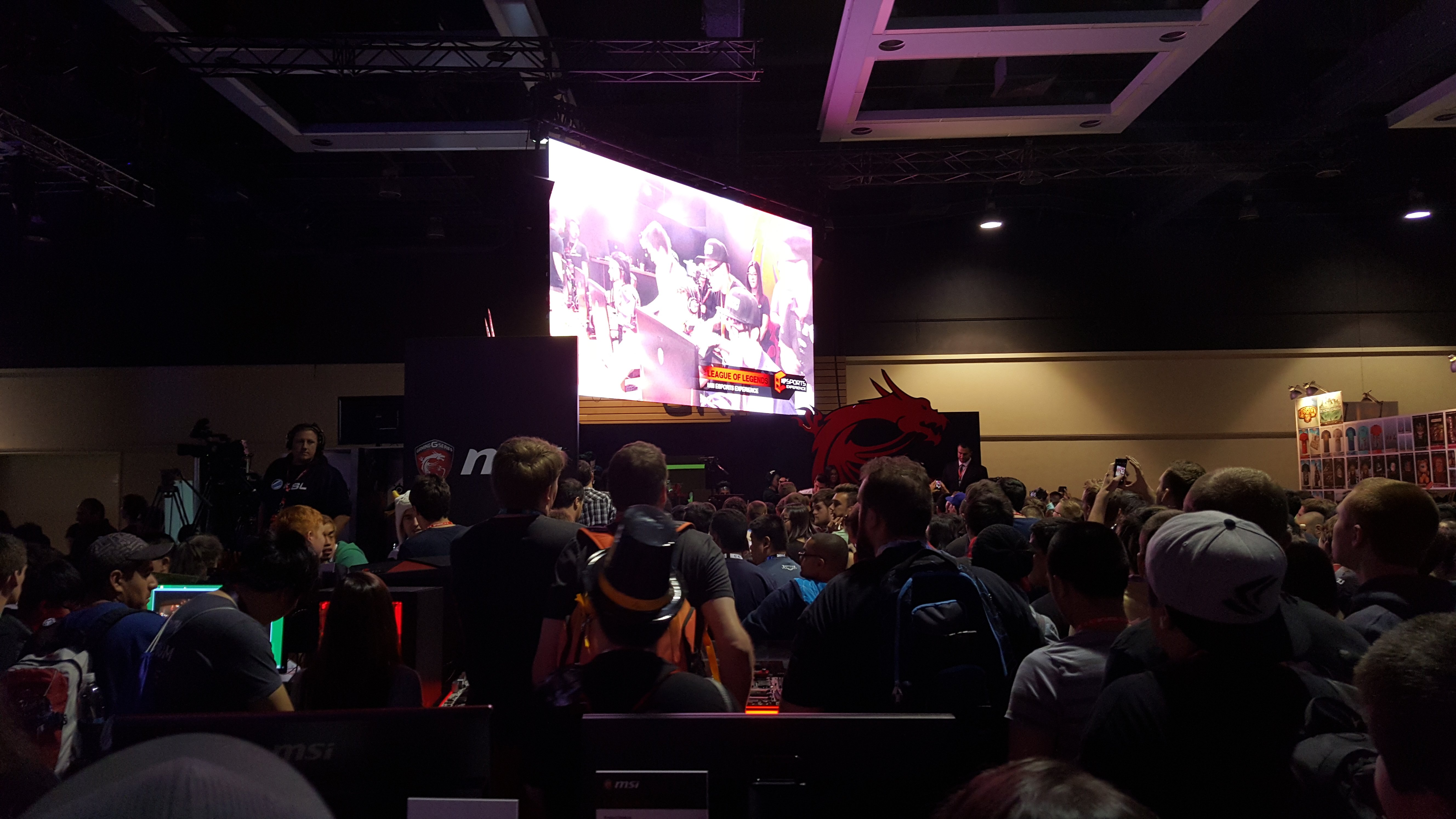 It was great to see how well MSI could connect with their fans on the show floor; there wasn’t a time where I couldn’t find a staff member. It was also a big deal for a lot of the fans to have a chance to jump into the ring, being able to jump up into The eSports Experience and participate. Gamers from every skill level were welcome to participate; there were no feelings of  “Oh you’re only silver rank? too bad” it was “Sweet! you want to play? come on up!” It was a fantastic, welcoming experience.

Talking to Sam more, the review AYB’s Matt Vinck did on the MSI GT80 Titan came into conversation. MSI is very proud of how they’ve been able to innovate with the product and what they’ve done to make such a beast. I mean, when you put in two NVIDIA GeForce GTX 980M SLI and you can keep the machine cool, that’s definitely something worth boasting about. He shared with me the thermal innovation and work MSI had to put to into cooldown assistance to ensure it would stay cool.

All this talk about what the Titan could do, brought me to what MSI had up their sleeves: what’s coming up next?

This is when things got exciting. I asked for the overview of 2015-2016 and why gamers should be excited about MSI, maybe switch teams. Sam shared, “if you thought the GT80 Titan was something, we have a lot coming in all four of our product lines: Gaming Cards, Gaming Motherboards, Gaming Laptops. and of course MSI’s line of all in ones.” Bottom line; MSI has a lot coming Gaming is about to kick it up a notch.

In closing, Sam shared with me the biggest thing being released shortly by MSI, and personally I’d say the biggest take away from our interview: MSI’s new card, the 980 Ti Lightning. This might just be the biggest thing to come to gaming in recent years. This card is an absolute tank. 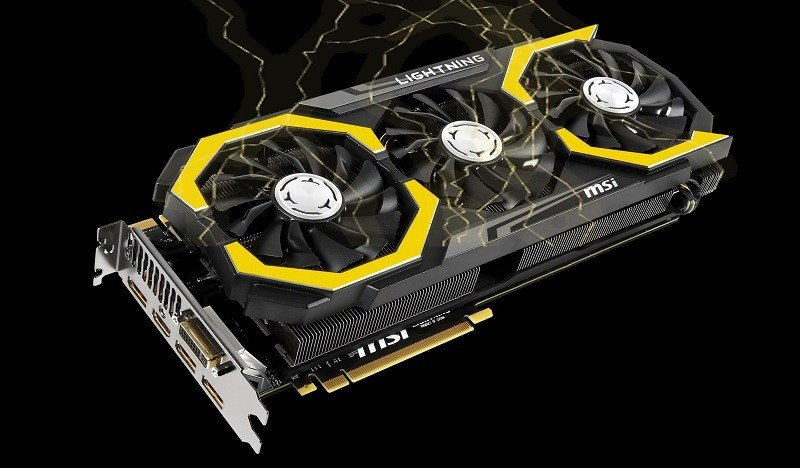 MSI literally built the card of cards with the beastliest of heat sinks; this card was designed to be overclocked and turned into the ultimate gaming card.

In closing, MSI ran a fun, smooth and easy-to-access booth, where fans and I felt welcome to participate and compete. I look forward to seeing what MSI has up their sleeves for us gamers in the coming weeks. PAX South is just around the corner, so who truly knows what they are going to do next!

Disclosure: MSI is a sponsor of aybonline.com.