Moments, And The Long Slow “Death” Of MMOs 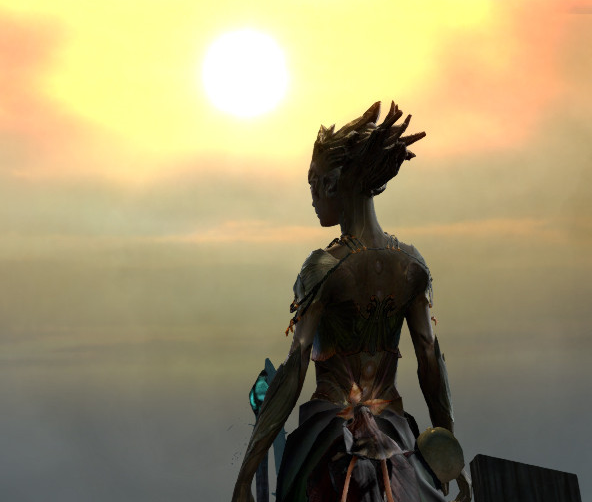 Many, many years ago, in vanilla WoW:

I’m a teenager. My father and I are trying World of Warcraft for a while. He’s letting me use his account, so his dwarf paladin and my undead mage are side-by-side on the login screen. I was a bookish kid, not really a huge prankster… so a prank would be very out of character for me and very unexpected, right?

He later told me that for a few brief terrifying minutes, after he woke up in Booty Bay naked and apparently bereft of all his valuables (but before his guild buddies let him in on what I’d done), he was frightened at the possibility that hackers had taken control of the account, and we laughed. I wasn’t there for the payoff, but that wasn’t really the point.

My buddy is frustrated.

I’ve leveled up a pilot and decided I like mining and collecting frigates. The frigates are fine—I’ve got quite a few, some of the rarer ones, too. But I seem to be developing this habit of taking big expensive mining ships out for a spin in low-security sectors and getting my hull ventilated by enterprising pirates.

He links me to some battle reports online, tells me I’m making the corporation look bad. Talks about tactics, optimizing mining runs. Says maybe I want to plan things out, take an escort ship with me next time. Gracefully, he never mentions the cost of the ships I’ve lost. This is all well and good, and he’s perfectly right about everything.

I thank him for letting me know, and I cut the game out of my life. I’m not there to make spreadsheets sing, that’s not really the point.

Not long ago, in Guild Wars 2:

I’m chatting with a friend of mine, and she wants to try fractals—endgame dungeons that level up the more you play them. I say sure, we grab some friends and guild buddies and head on in.

This run was rough. The elementalist was dropping like a Skrillex track, my buddies and I are frantically trying to keep our cleansing up against hordes of debuff-happy mobs while we try and smash the chains off a colossus. More than once, the necromancer—tankiest class in the game, FYI—is left to fend for herself while the rest of us wait patiently to regroup.

My friend is feeling guilty. So guilty. Like she’s the one failing, or she’s responsible for this terrible time. I tell her no, we’re learning, it’s okay. It’s not like any of us are SRS BZNS hardcore fractal runners, it’s all for fun. And hey—now we know how to handle rough runs, right?

It calms her down. She’s grateful. We end up abandoning the fractal run, but the fractals weren’t really the point anyway.

I see a lot of talk about the death of the MMO, why they no longer appeal to us, WoW’s numbers are falling off into the Pit of Death, marking the passings of giants, and so on. But a lot of these obituaries just seem to point at numbers, share a couple you-had-to-be-there moments, and shed a tear or two. I don’t see anyone talking about how these games reward us.

MMOs were some of the first games to reward you for your time more than for your skills. The things we strove for back in the day, server firsts and world firsts, max level and great drops—the only way you’d do better than average was if you put ludicrous amounts of time in. (And they still use this model—Daily Achievements, anyone?)

Rewarding time over skill is great for core gamers with a boatload of time on their hands. But as we get older, and as gaming gets older, that very naked time-to-reward ratio gets so damn tiresome.

Instead, I think we value emergent moments more, we value the little things more, like waking up naked in Booty Bay because our kid pranked us or helping a friend master a difficult fractal. We value memories.

And lately, traditional western MMOs don’t do much to create or reward those emergent moments. They check off spreadsheets, telling us stories without really giving us the chance to tell our own.

No, these days, MOBAs are where you go if you want moments. You’re rewarded for your skill as well as your time, and on top of that, every match is its own story. You get an emergent moment, you get great play and a story to tell your buddies every fifteen, twenty, thirty minutes. And if you want, you only have to put in that fifteen, twenty, or thirty minutes. It’s a model that satisfies both core gamers and somebody who just put the kids to bed.

Cliff Bleszinski has this theory where you can measure the popularity and long-term potential of a game by the number of crazy YouTube videos about it. I don’t think he’s wrong. Give us stories to tell ourselves, on our own time, and we’ll sign up.