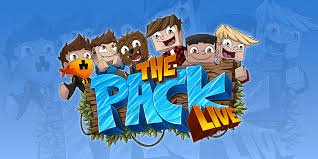 Do you want to go see some of the top Minecraft players on Youtube? Then you are in luck! Announced this past Tuesday, blackshore, a digital content management company, unveiled “The Pack” LIVE.

“The Pack” is a Live event that is going to be hosted at the Red Lion Hotel Anaheim Resort Disneyland, and will play host to some of the biggest names in the Minecraft community. Those players? None other than BajanCanadian, PrestonPlayz, JeromeASF, Lachlan, MrWoofless, and other special guests will be gracing the event.

Planning on heading down? You are? Awesome! The event is being hosted September 24th and 25th. Cost? It’ll cost you $7.99 for early bird tickets, and $9.99 for general admission. Too cheap for you? Cool because they have a VIP admission which will cost you $100, but comes with a “premium swag bag”, t-shirt, and photos on the red carpet with the the stars themselves! Of course, if you don’t live in Anaheim, flights/driving are extra costs. Tickets are available on Eventbrite.

Quinn Smith is a contributor for AYBOnline. When he isn’t cheering on his beloved Anaheim Ducks, he’s trying to craft’em all! His Opinions are his own.