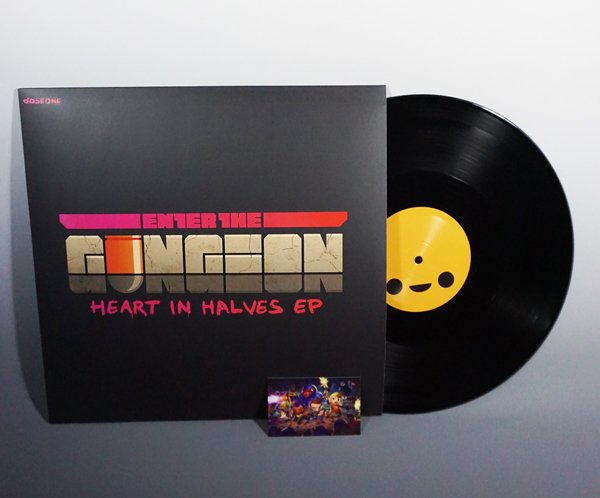 With a name that already sounds like a dope* album, Enter the Gungeon‘s hip-hop record drops today.

Enter the Gungeon: Heart in Halves is brought to us by doseone, Dodge Roll Games, Devolver Digital, and Laced Records. The eight-track vinyl costs $40 and is available exclusively on the Devolver Digital Store. Only 1,000 copies of the first pressing have been made. 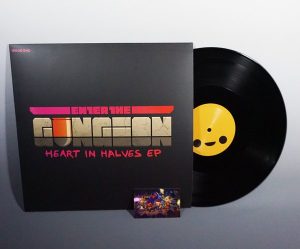 Devolver Digital says the new album is “a unique mix of Gungeon beats and doseone rhymes,” inspired by the action and adventure of the game.

doseone‘s soundtrack for Enter the Gungeon is outstanding. Years ago, speaking with Laura Intravia from Video Games Live (also known as Flute Link), she told me one of the differences in composing for video games is players often have to repeat levels or stay in sections for extended periods of time, so eventually the music has to loop, and it can’t get boring; Enter the Gungeon is a game designed around repetition, and the music does not wear. It’s a soundtrack that is influenced by hip-hop and driving beats, and apparently those who’ve reached a specific ending have already heard the game’s theme with full lyrics and rhymes.

Sample tracks from Heart in Halves can be heard on Devolver Digital’s SoundCloud.

On top of the new album, Devolver Digital says Gungeoneers can expect new content for the game, including a “big ol’ expansion” over the next six months or so.

(As a side note: I’ve been waiting for a reason to write about how Enter the Gungeon has the best use of Pop Goes the Weasel pretty much ever, but I just found out the whole Wind Up Gun/Pop Goes the Weasel thing is originally from Futurama. So, okay. Futurama used it best. Gungeon made a cool reference.)