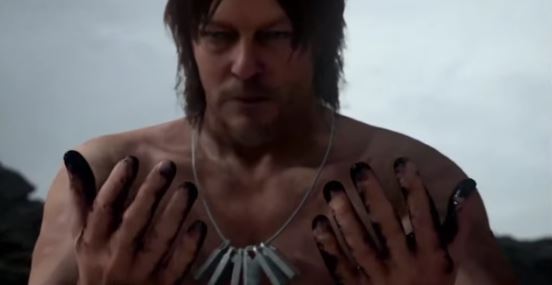 Andy House of Sony Interactive Entertainment stood before the an anxious audience last night at the PlayStation Conference. In well-timed suspension, he uttered the words, “Please join me in welcoming one of the most creative talents in the history of gaming…”

As the curtain lifted and the lights played around the stage, suddenly the Kojima Productions logo appeared at the back of the stage, and finally after much waiting, Kojima strolled to center front. And the crowd went wild.

There have been talks of Kojima and Sony teaming up for a while now, with much speculation towards a new IP, working with Norman Reedus and del Toro again, and other rumours, especially after the Konami/Kojima divorce.

Is it Silent Hills? No. And honestly, I’m happy it isn’t. Kojima is capable of creating fantastic games, with or without Konami, and I’m happy it’s a whole new IP.

The trailer sent some chills down my spine, I must say. Starting off with Norman Reedus in his naked glory, he finds himself handcuffed on one wrist, and a crying newborn a little ways away with its umbilical cord still attached. After picking up the child in anguish, it disappears and he stands up, walking forward towards a beach full of dead fish and whales. Five small shadows dot the skyline menacingly, with Low Roar lending a haunting tune to this preview, then damn — that title graphic.

While I wouldn’t be surprised if there were some bizarre horror themes akin to the Silent Hill series, it’s apparent that Kojima is differentiating his game from the PT project. I got some sci-fi and surrealist vibes while watching the trailer. I’m looking forward to learning more about the five shadows in the sky and Reedus’ history with the child and his scar.

The name Death Stranding seems like a pretty unusual name but upon researching, the term “stranding”,  in regard to fish and whales, is an event where a marine creature is found dead on beaches or shores. It’s very interesting, especially since Norman Reedus finds himself stranded, naked, and confused, in a never-ending landscape of dead fish and whales before him. But will this imagery and theme be an anchor to the whole game? It’s unclear, and I can only speculate at this point. Something tells me that Death Stranding might be a working title, but we will see.