JUST LET THE DAMN CAT IN. 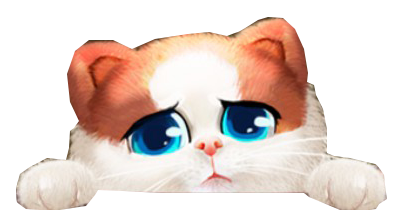 It’s raining, it’s always raining. As the droplets run down the window on this autumn day, I sip my coffee. It’s cold as always. I throw it against the wall in frustration and cry out in the deepest of agonies.

I fall into a pit of endless sadness, hot pockets spewed across the floor. I slip further and here I am, laying on the cold floor saying to myself, “Gaming sure is dead now a days.” That was until I took a scroll through the new release section of Steam, as if my cat Jeff had heard me from over the internet.

Gaming? Dead?? Never in all my life have I been so wrong.

It’s not every day that the edgiest, life-changing, story driven narrative hits you right in the face like a sea of Volkswagen emissions legal trouble. (#GetBetterSoon.)

Prepare your body, mind, and soul. This is the natural affect of playing Let the Cat In.

Now I know exactly what you’re thinking: “Orion, this is the stupidest thing you’ve ever said… hell, I’d rather go get disappointed by another buggy Assassin’s Creed game“. I hear you, trust me, I would love to tell you to go do that, and yeah I was just as apprehensive as you – that was until I cleared thirty pain staking, mind breaking levels of puzzle, where my very soul was tested.

It may seem simple: the story that is “let the cat in” and you win.

But why? Why are you given this daunting task? Where are the owners? Don’t they have legs? What a bunch of lazy good for nothings. So many questions.

Where is animal services for this animal neglect even? Trust me, the exact same thoughts crossed my mind when I realized this is not our average puzzle game. It is, in fact, survival horror.

Allow me to take you down the rabbit hole and see things in a new light. 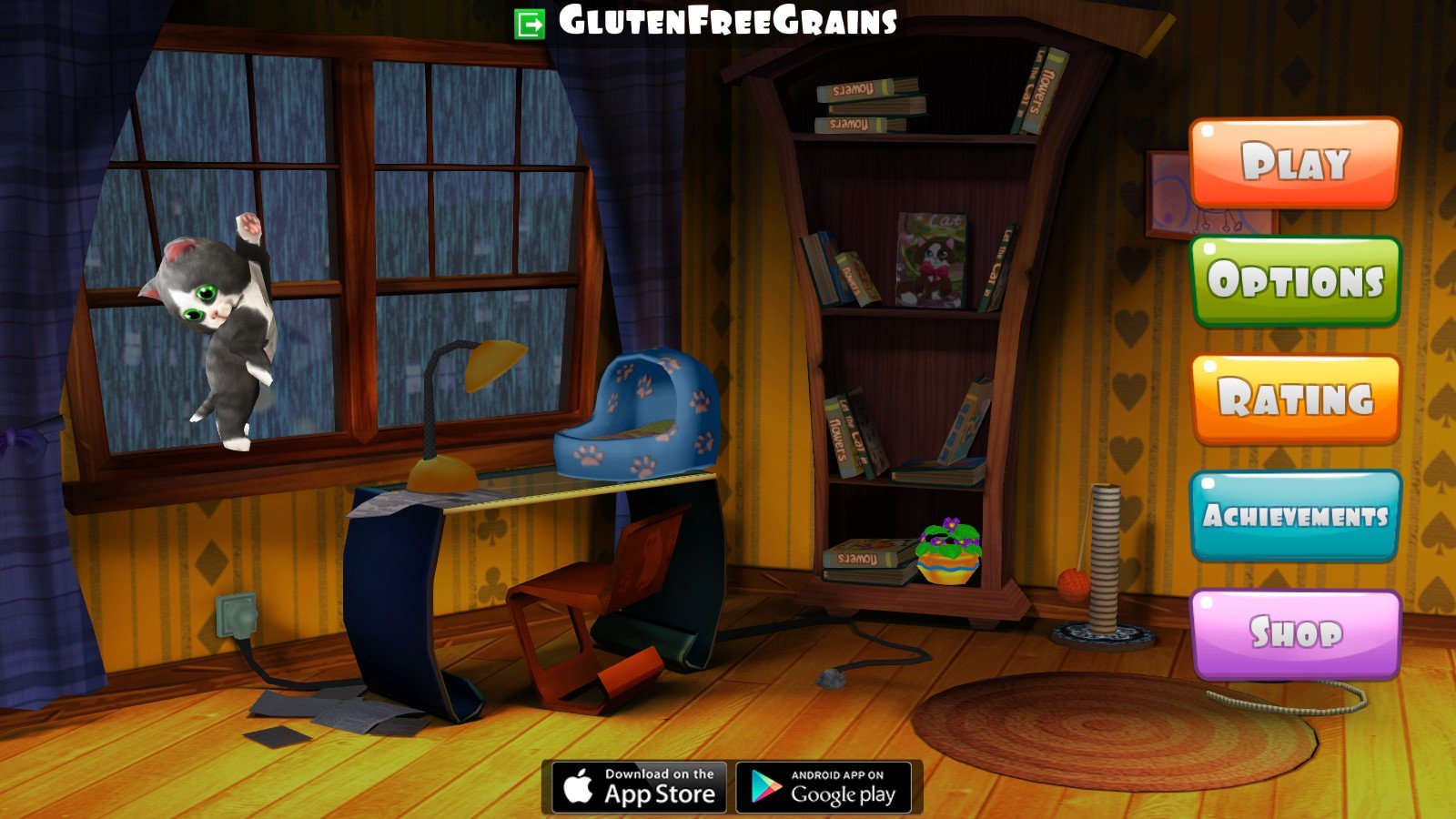 Generally I don’t dissect games on this sort of level; however I will make the exception when it involves delightfully cute animals. Not even leaving the menu screen, we have our first major clue – and possibly the most important – that being the cat is inside. How it got in is beyond me but what we know for this exact moment is this: the world is perfect and undisturbed. The cat is inside but something sinister clearly happens between the loading screen and the eventual first level, leading us to our second point and surprisingly with solid backing:  the cat is in some sort of purgatory/Silent Hill‘esque story arch.

Wild? I know. Allow me to explain with our first observation of gameplay and even menu screen: it’s never sunny out, not once. This was our first clue for some darker story was at work. The game is always set in night: as you’ll see in screen shots to follow, there is never one sunny moment, ever.

This takes us to our second and more curious point: upon first look, the book shelf is something you can write off as just another bookshelf. However, what you didn’t realize is this: upon closer inspection and flipping the image a series of the books all say LET THE CAT IN. Wait, what?

Either this is a message from a higher power, the ultimate form of meta… or as I said previously, this is some sort of Silent Hill hellscape, and this cat is being punished for some unknown reason to us yet.

This only brings us to our next finding while venturing in this game: once you start it up and get beyond the title screen, we are immediately set outside in the dark and cold with the objective to get back in. With nothing telling us how we got there, we can only hypothesize we’ve been placed there.

This thankfully brings us to actual gameplay. As the objective is to get back in, and the cat definitely has no way to do so without any humans around, it’s up to YOU, the player, as what we’ll classify as a fourth dimensional other worldly force with the ability to influence the world and being the sole bearer of the ability to let this poor kitten back in.

Right from the beginning, we’re faced with obstacles and mind breaking puzzles at every turn. You must pull it together and remember what you’ve learned from previous games with puzzles like God of War, The Elder Scrolls V: Skyrim and The Legend of Zelda: Ocarina of Time. With this gaming experience combined, you should be able to overcome the trials this game has set forth.

The objective here is seemingly simple but don’t be so easily fooled; a ball falls from the ceiling from what we’ve gathered it’s in some sort of suspended animation, in your ‘pause’ you must arrange the room to make the ball hit not only all the stars in the way but to ensure it gets to the objective, opening the door. To make things extra challenging there is only one specialized knob to let in the cat.

With the power of problem solving, critical thinking, and a basic understanding of physics, you can overcome the challenges set forth. Sometimes this is no easy feat as we found in the late game, as we not only had to rearrange shelves, but also had the surprise element of adding in new knobs, a custom pulley system, and falling books. 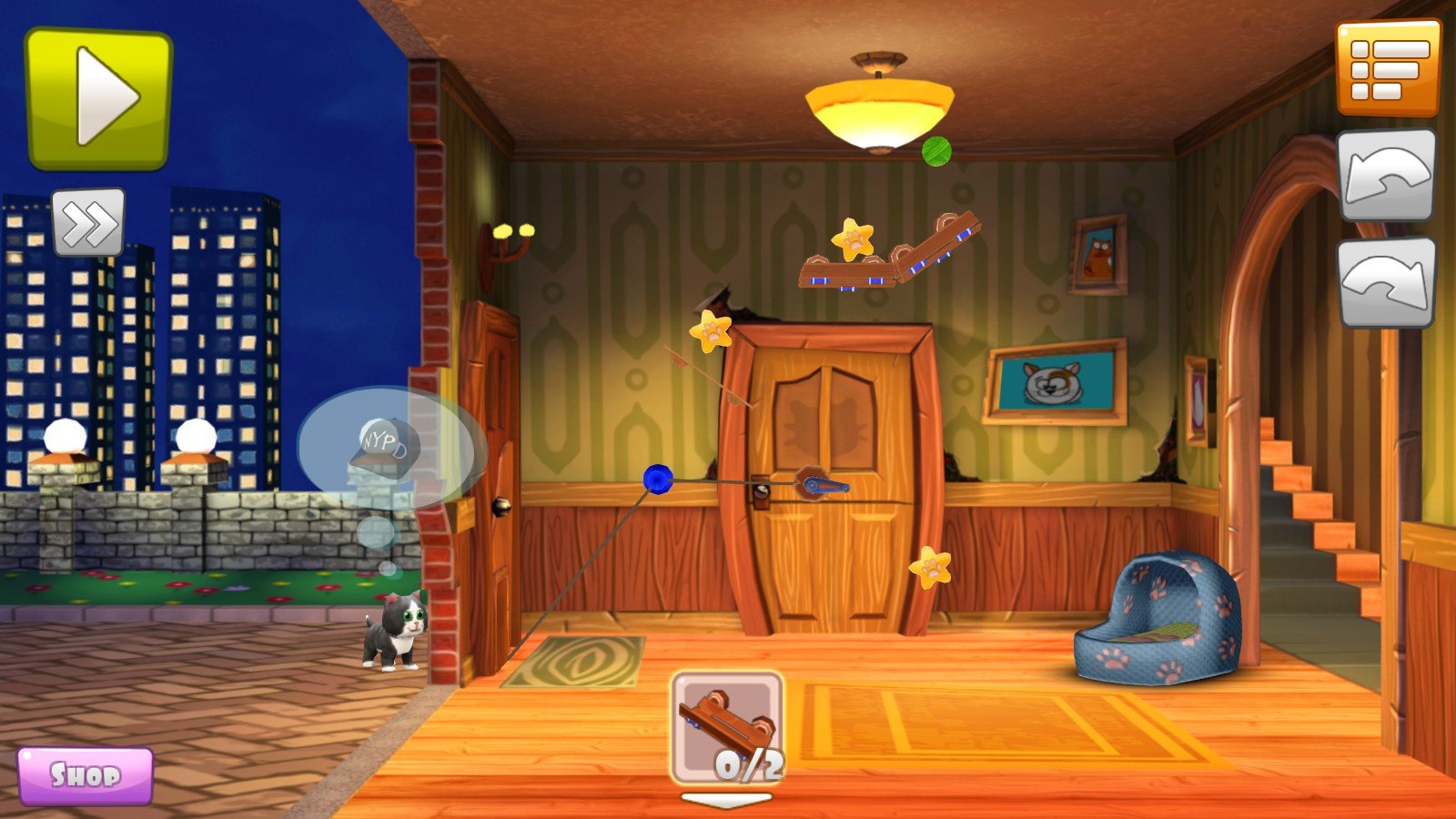 One thing that remained constant throughout the entire game, asides from human interactions (or lack of), was something else, which brought to my attention the gravity of the situation at hand. Oddly enough, this laid in plain sight: the deteriorating condition the house. With a quick glance we can tell by looking at the walls that this house is not maintained and solidifies the fact that the house is clearly falling apart. This only provides us with more clues as to what is really going on and only proves our theory further.

Our next clue, which adds the final touch to this nightmare: Halls and floors that go on forever, an endless hell. 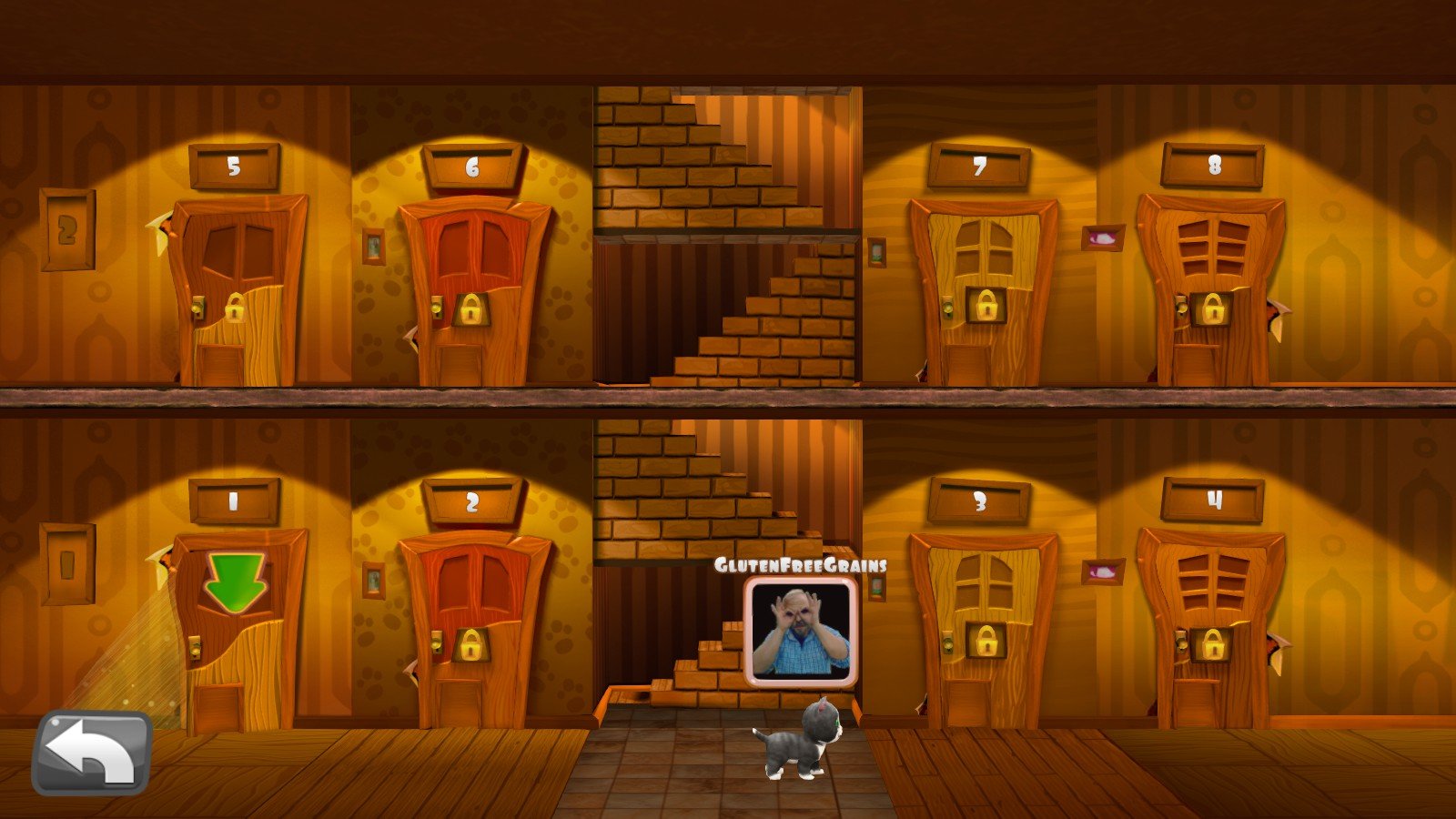 We can now have the final piece of this puzzle to not only prove this is purgatory, but quite possibly that Let The Cat In is one of the best horror survival games to come to Steam in recent months. Allow me to explain further and level you with some facts.

So what we know again is this: the cat needs to be let in as you stand and wait, the cat only screaming in meows to be let in. This forces you, the exterior force, to stop this and start solving the puzzle set forth to let the cat in through an easily accessible cat door. It’s not locked or even blocked – the cat can easily walk through as a mere string is what pulls it open. Basic physics really, it’s a simple pulley system which serves no purpose, at all.

Our final point for this story is this: if you’re familiar with the tale of The Illiad where our hero Odysseus arrives at the island of Aeneas, the mythical home of Circe, a goddess of magic – in his story, she turn turns his men into pigs. I believe the same has happened to our friend here. Much like the crew of Odysseus on the island of Aeneas, I believe our character fell into a trap and powerful spell, thus turning into a cat. As we see in the picture below, the cat has many human-like qualities, such as clothing, hats, and accessories and the need for obtain more. 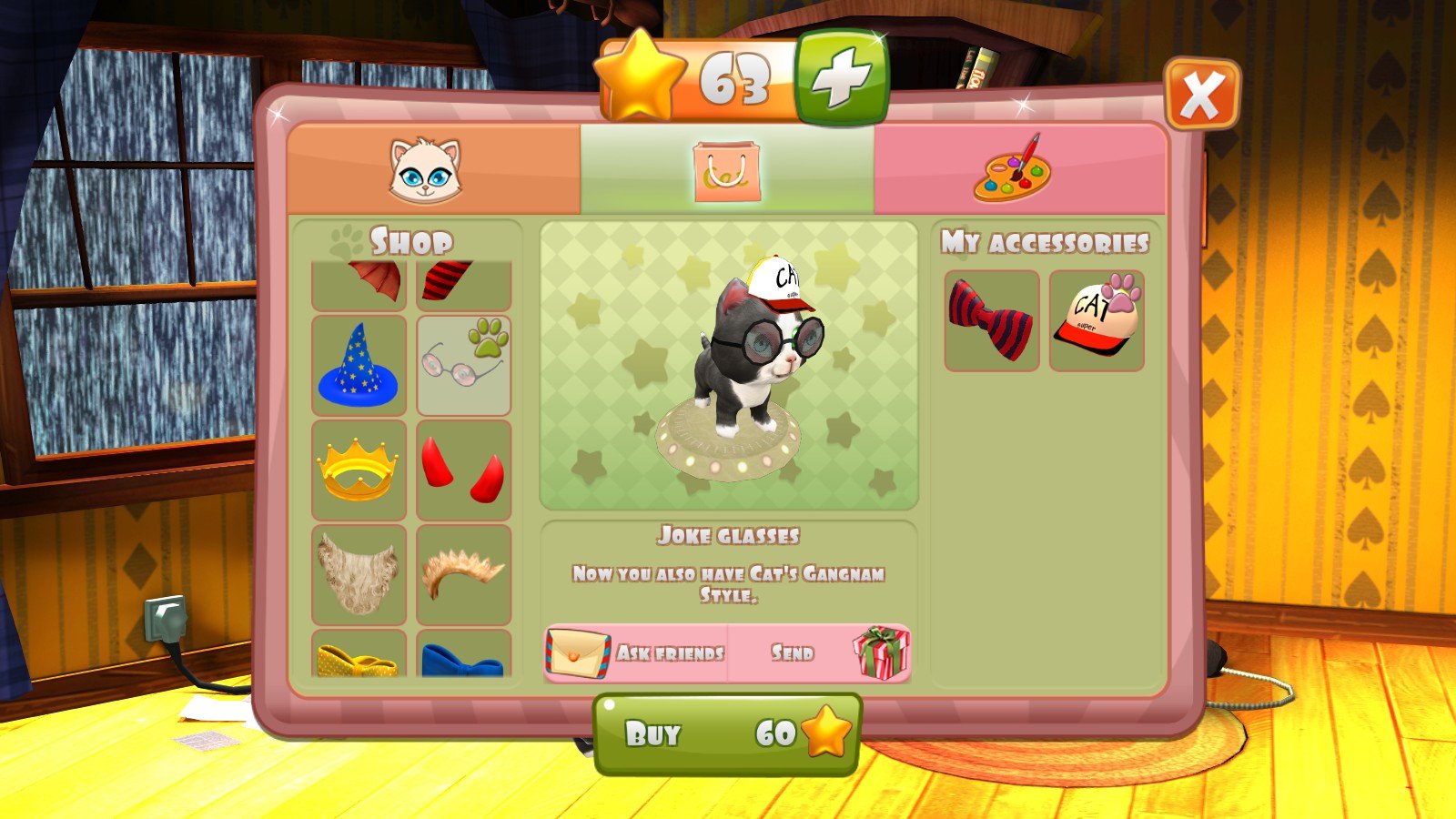 Seemingly, the only way to break the spell is to escape the building by actually letting the cat in and facing the trials of the endless floors and halls. When we look at it from this perspective, we are very much like Athena guiding a warrior through a labyrinth.

In closing we have pulled all facts from game, myths and legends. Our story stands as this:

“We must let a cat into a building that is slowly deteriorating, to face the trials of floors of puzzles and endless halls of tests. We, the player, are the invisible hand that guides our “hero” through this labyrinth, in hopes of breaking the spell from a powerful magician/goddess.”

Then again, I am known for reading way too much into things and for all we know, this is probably just a cute children’s game about solving puzzles and dressing up your cat, with the ability to purchase in game items to make them fancy, show off to friends, and compete in online leaderboards.

In the end, I leave it to you. Which is it: a cute children’s game or an urban telling of the Illiad? Tell me what you think in the comments below!