Jesse Dreams Of Content — When You See One Set Of Footprints

… it was Mewtwo, carrying you so you would not falter.

In a recent release on their Facebook page, Niantic announced a few things: they’re working on returning the “three-step display” that let you triangulate Pokémon locations; they’re limiting access to third-party services; and they’re still forging ahead on launching the game officially in more countries.

The other night, I was the Designated Adult for a crew of fellow AYBers as they conquered a swath of Corydon Avenue. (I don’t play the game myself, yet—I love my BlackBerry too goddamn much.) Mostly, this involved car-spotting and light conversation, with a dash of high-fiving and pep talks at critical intervals.

One of our crew (anonymized to avoid the Niantic banhammer) led the way as he tracked the locations of various pocket monsters using one of these third-party services. And he was key—thanks to his efforts, and thanks to the third-party service, we were able to make a mad dash into a back alley and capture, headily, a Kingler!

It was a fun night, full of laughter, jokes, and adorable destructive mutant pet creatures bent to our will. But I have to think it would be much less fun if, instead of running around capturing known Pokémon based on good intelligence, we sat there going, “I see steps! Wait, no… no they’re gone. Wait, more steps! They’re closer! … Was it this way? Maybe… no. Hunh. Welp, back to literally any other game.”

BioWare—developers of Nintendo DS smash hit Sonic Chronicles: The Dark Brotherhood—has become the latest dev to “hug the alien”, shutting down their official forums and directing fans to use the Reddit.com subreddits for their various games instead.

I cannot blame them. Maintaining an online forum is roughly equivalent to repairing a wall made of imps. Imps who are literally taking the pieces of drywall you just plastered in and throwing them back at you. Who wants that job? Man, I’d rather drink a tall, cold glass filled with plastic shards of Nintendo DS smash hit Sonic Chronicles: The Dark Brotherhood.

That being said, I do hope they retain some venue for official, public accountability. The redeeming thing about a forum is that you can see when complaints are heard, both your own and others’, and track them once the hearing has been made clear. It lets every gamer feel a little bit like a shareholder in the success of the devs and games they so love.

Moving discussions to Reddit—and, therefore, beginning to rely on volunteer fan moderation instead of full-time community managers—is both a wonderful way to have more time to work on repairing walls made of walls instead of imps, and a wonderful way to obfuscate how much listening you’re actually doing.

Twitter is similarly ineffective. I mean, it’s great for broadcasting messages to everyone, all at once, but it’s difficult to have a trackable, accountable back-and-forth on a single topic when both of you are using megaphones, in the middle of millions of other megaphones. 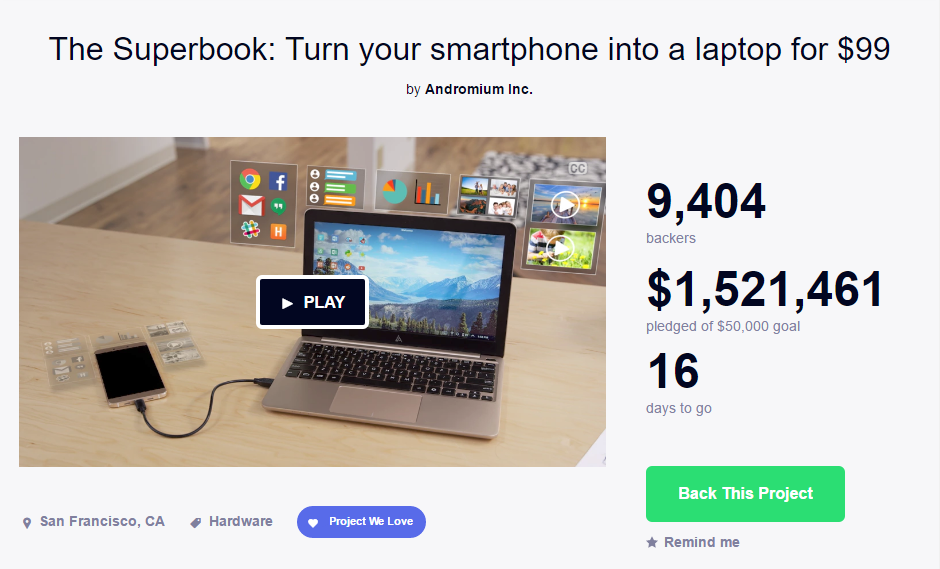 There Is A Kickstarter For A $99 Laptop Powered By Your Cell Phone, Voltron Is Real

Let’s end things on a lighter note, shall we?

Asus didn’t hit home runs with their attempts, but now, fledgling hardware makers Andromium are on Kickstarter with the “Superbook”, a laptop powered by your phone that costs a paltry $99 US (!).

The Superbook leverages USB OTG technology (which most modern phones are equipped with) to boot up a custom Chrome-OS-looking experience. According to Andromium, you’ll be able to flawlessly write e-mails, compose documents in Google Docs, and perform basic web-browsing, using everything that’s already authenticated and logged in on your phone.

And can we talk about that price point? $99 US! You could get a laptop for the price of going to no-name groceries for a week or two.