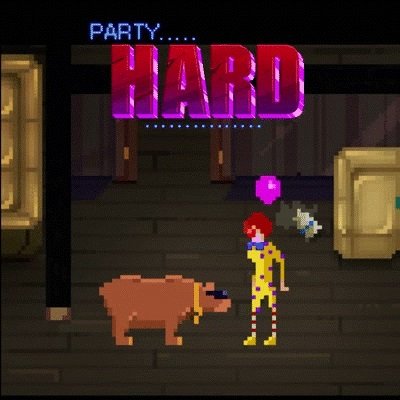 Now you can do your stabbing on the go with a mere swipe!

Party Hard is a pixel stealth game in which the protagonist has had it up to here with partying, and it’s coming to mobile.

In Party Hard Go, you’re still just your average working stiff, looking for a little peace and quiet — oh you’re also a psychopath. That’s a thing… that you are. Taking matters into your own hands, you opt to end the party — all parties! — by killing the participants. It’s similar to games like Hotline Miami and Serial Cleaner. 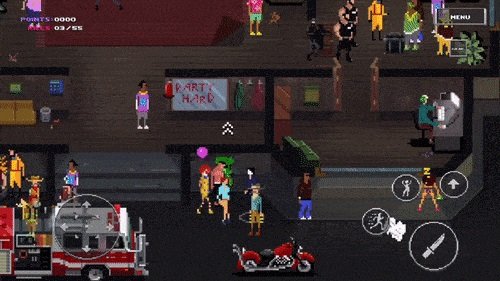 Am I being prudish in wishing there were more wholesome ways to ruin the fun? The thought of sneakily bumping a record player (“A what?” asks half the readers), changing clocks, subbing in non-alcoholic beer– in fact, someone come to a party with me in real life and let’s do this. I mean, if you know of any parties. I don’t.

This award-winning game has been available on Steam for a year now, but should drop on iOS later in 2016. It was originally created in a game jam by Pinokl Games. With tinyBuild’s backing, a full version was released.

Both touch and virtual controls are being created for the mobile version. tinyBuild CEO Alex Nichiporchik says the virtual control layout is perfect for anything bigger than or equal to an iPhone 6. He says the original idea to have a universal, context-sensitive control scheme worked on smaller devices, but sometimes made the player feel like they didn’t have enough control. Nichiporchik has a full rundown of the controls, and the game itself, here, wherein he says with the virtual controls it “feels like the full game.”

The game comes with 19 semi-procedurally generated levels and five playable characters. As in real life, you must blend in and dance to avoid suspicion. There’s also a bear.

No release date has been announced. Nichiporchik says we’ll hear more Party Hard news at Gamescom. Until then, here’s six minutes of gameplay footage from the mobile version.