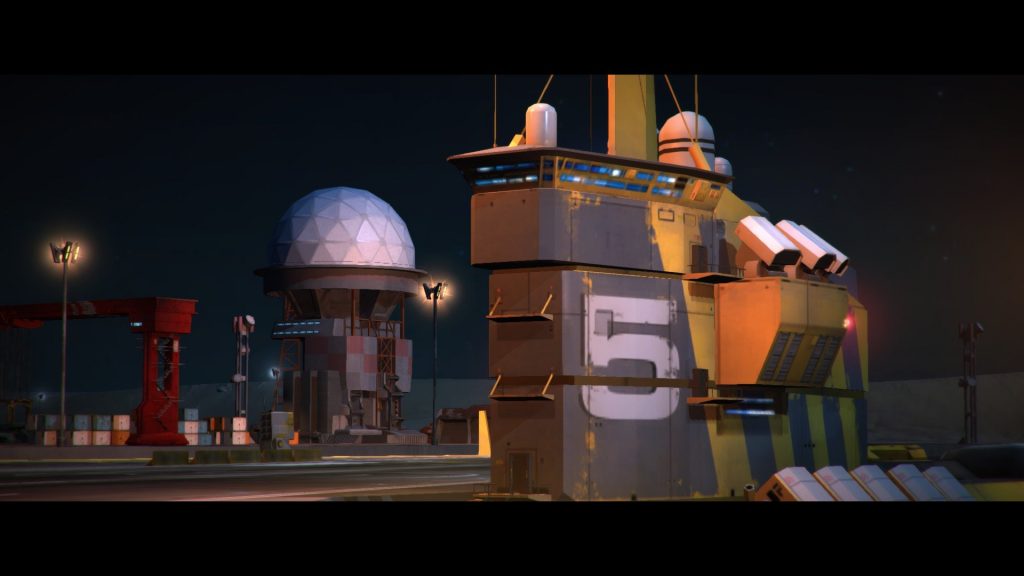 The desert hasn’t worn down the quality of this game.

Back when Homeworld came out in 1999, I was but a wee kid who had no idea it even existed thanks to a crappy dial-up connection; if it wasn’t at Future Shop or the nearby Advance Electronics, I probably didn’t know about it. My first taste of an RTS was the classic Total Annihilation from Cavedog Entertainment (which I still have the original box and CDs for), so it wasn’t until I was a grown many, many, years later that I somehow discovered Homeworld, and I instantly fell in love. But after all these years, does Blackbird manage to reignite that flame?

Deserts of Kharak drops players on the titular planet 106 years prior to the events of Homeworld. Centreing on Rachel S’Jet, the game follows her expedition into the desert wastes of Kharak to discover what happened to the first expedition, headed by Rachel’s brother Jacob, who left to investigate the “Primary Anomaly” discovered by the Northern Coalition satellites many years earlier. However, the fanatical Gaalsien clan to the south launches a surprise attack against the Coalition, forcing Rachel and her expeditionary carrier, Kapisi, to launch early before their base is overrun.

This all comes to life in 3D animatics, breaking away from the black and white animatics of the originals and starring real actors (Hayley Sales, who both voices and portrays Rachel) which makes for some really enjoyable story missions. The musical score playing behind all of the missions and animatics, created by original Homeworld composer Paul Ruskay, often calls back to the original game’s score although there were definitely a few times that I was reminded of the Battlestar Galactica reboot which brought a smile to my face.

While Rachel has a fair share of the screen time, and Sales is wonderful throughout, the supporting cast aren’t given a chance to do much beyond mission setup and some well-performed flavour text. You’re given just enough information about the world, the characters, and Rachel to get the ball rolling but not too much beyond the necessities, leaving me feeling like I wanted more. Outside of the animatics, Deserts of Kharak is a game that rewards paying attention to the details and trusts that you’ll probably fill in the blanks with the little things on your own.

Like I mentioned in an earlier piece, the Kapisi is an impressive vehicle that functions in much the same role that the Mothership did in Homeworld 1. One part aircraft carrier, one part factory, and one part rolling murder barge, it’s an impressive sight in many of the cinematics and a lot of fun to steamroll enemies with.  The weight of this behemoth and its child units give your desert fleet a slower pace than you might be expecting; it’s a slower strategy game compared to most on the market right now, but it never felt frustrating or without purpose. Whether it’s onto the next resource patch, where you salvage spaceship wrecks for the essentials of building your fleet, or to punch a hole in enemy lines, it serves as the focal point of every mission, and I loved hauling it around. It feels oddly gratifying when you send your units in motion and they move and sound just like you’d expect.

And boy do they sound and look good. The roster is the usual RTS fare; from the dune buggy-like LAV that hops and flips over sand dunes to the hulking airborne Gunship that circles around targets raining death like an AC-130, no one unit ever feels or sounds the same. They all feel unique with their own distinct looks and sound effects, while managing to share little details with their space-faring descendants 106 years later.

Deserts of Kharak keeps combat simple with a rock/paper/scissors-style setup. LAVs swarm the less mobile and slow-shooting rail guns until they explode. Rail Armoured Assault Vehicles (tanks) chew up LAVs and rail guns if they don’t get torn to shreds by their cannons first. It works in much the same way for the 3 air units and 3 battlecruiser class units. It forces you to keep a mixed bag of units on hand so you can’t just “Zerg” around a map with a horde of the heaviest weapons cutting through everything like butter. They also rank up as they score kills, giving them small bonuses like extra armour and earning a name based on their clan or “Kiith”. Compound that with the limited resources and units carrying forward from mission to mission, and every loss is felt as you prepare for the next encounter.

The AI isn’t always cooperative though. While you don’t have to micromanage units, there were several occasions where I had to stop my units from doing something that would get them destroyed. Unfortunately, the ability to manually set formations doesn’t return in DoK, so your units will simply position themselves in the best spot based on where you clicked. Sometimes this fails miserably, so you end up with your most vulnerable, or most fragile, units facing the wrong direction through no fault of your own. Also a few minor bugs popped up with one particularly memorable time (pictured left) where the physics broke and my carrier popped up in the air like a balloon, landing safely and right-side-up 20 seconds later. Another annoying one is the game locking up your right-click into the free camera mode, forcing you to try clicking out several times.

But I never felt like I was just spinning my wheels to puff up game time; each mission felt purposeful, with a different story driven objective from the last. In one mission you’ll be salvaging massive ship wrecks to discover their origin, then in the next you’ll be chasing down an enemy fleet in the sand. Even though you spend all of your time in a desert, the environments are no slouch, throwing twists at you like an ocean-sized sandstorm that feels straight out of Mad Max: Fury Road, or guiding your fleet through a spaceship boneyard under the cover of night.

On top of the campaign mode there’s a Skirmish mode where you can square off against AI and play as the Coalition or Gaalsien. It has the usual “Annihilation” mode where players fight to the death or a capture the flag mode where you must return artifacts to your scoring zone. The latter is pretty fun in part because it puts both teams on the clock to score as quickly as possible instead of just gobbling up resources and boxing your opponents in like annihilation mode. In keeping with its RTS lineage at former developer Relic Entertainment, and much like prior Homeworld games, DoK is ruthless even on the default difficulty. If you aren’t careful you’ll quickly find your base being overrun by tanks or angry little LAVs attacking your undefended resource salvagers.

You’ll find the same modes in the multiplayer mode, which comes with a bare-bones lobby and matchmaking system. There’s a ranked matchmaking system and leaderboards if you’re feeling competitive, but I haven’t been able to find a match to really feel out competitive play. While this seems symptomatic of the game’s (currently) low player population which, based off Steam stats, is leaning almost entirely towards the single player, posts on the Steam boards and Blackbird’s website indicate there’s also a problem with matchmaking just not working at all. A bummer for sure.

It’s a testament to the gameplay and story that, despite problems like this, I was glued to the campaign right until the end. A real-time strategy game is already a tough sell for many by simply being a game in that genre; however, people who may not give an RTS a second look will still find something to enjoy, thanks to DoK‘s relatively simple gameplay.

What Blackbird manages to do is impressive: they set DoK apart with its methodical pacing and beautifully simple campaign, all the while calling back to Homeworld without lazily pandering to the originals. The Homeworld fan in me loved it flaws and all.

If you’re looking for an original sci-fi fix Homeworld: Deserts of Kharak might just do the trick.

Matt Kondracki is Senior Editor, News for AYBOnline.com. His opinions are his own.