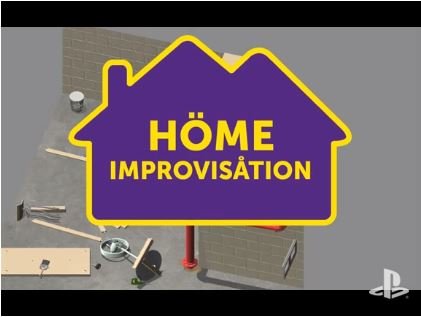 So I heard you like IKEA products. I do, too — which is why Home Improvisation has me super excited!

Sony and PlayStation just announced that this stupidly fun looking game will be hitting the PS4 in 2016.

Now that I have your attention with that, the game is fairly simple: build furniture. What isn’t so simple is that you have to complete it with using your analog sticks and, well, all your friends, too. That’s right, it’s got co-op… but more on that later.

Gameplay is rather simple, as it just drops an IKEA-like box onto the floor of the room you are working in, and lets you go at it. You can make the product at hand try to look like the one on the box, or say screw it and do whatever pleases you. They also give you tools, such as a peg maker and a hammer, so that you can make every project just right!

As for the multiplayer, fear not as it’s optional! But the best part is that it has a seemless drop-in/drop-out for other players. And it’s not just for online multiplayer either, as couch co-op is in there, too. So you can get really whacky things like this monstrosity below:

I cannot wait to actually play this game on PS4, and bask in the absolute insanity that it will bring. Here is the trailer for your enjoyment!

Quinn Smith is a contributor for AYBOnline, and is an avid PlayStation gamer and occasional streamer. He likes puppies and building frustrating IKEA products, because he has no life. All opinions are his own.