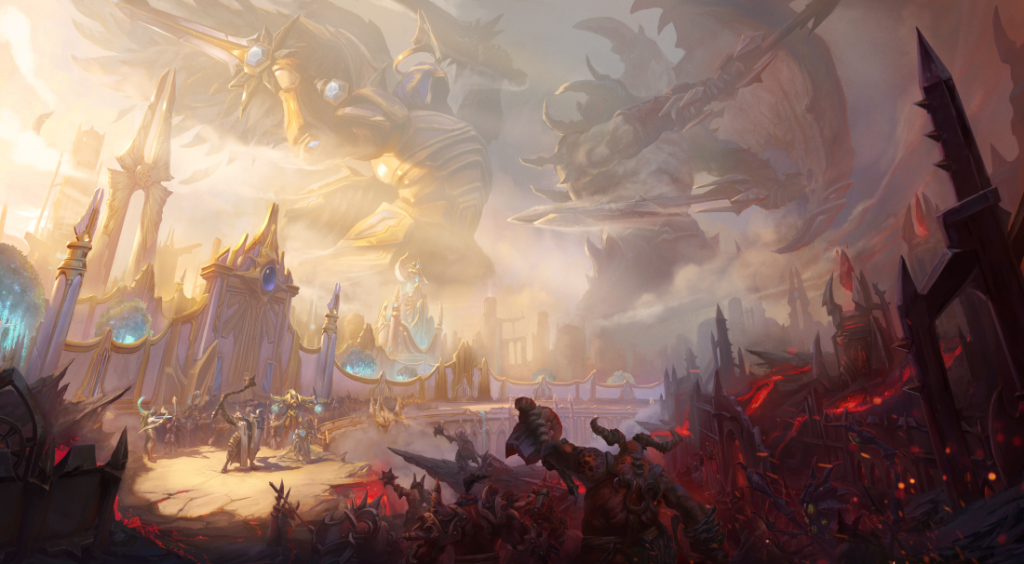 Find yourself a new lane Dota and get ready League, the MOBA scene will once again get another earth-shattering change, bringing heaven and hell into one. Coming June 30th is Eternal Conflict, the first content update for Blizzard’s Heroes of the Storm!

At the recent Heroes event in Los Angeles, lead game producer Kaeo Milker revealed to the world that the team’s focus for the fans is  new characters, new worlds — and most importantly, getting us more content quickly, as it has a dynamic affect on how we play the game and how the worlds change.

Here’s what I can share, based off of my notes from the stream.

First up, with Eternal Conflict, we’ll see a new story portion of the ever-changing Heroes of the Storm. The first content update will bring forth a new map called Battlefield of Eternity and a new Diablo character, The Butcher. Kaeo went on to say that we’ll see more of Blizzard’s original worlds brought over and that Warcraft and StarCraft are already being worked on. So far in Heroes we’ve only had a chance to play in Nexus worlds.

The content coming out is strictly Diablo themed, starting with the newest and deadliest-yet character, Diablo’s “The Butcher”. He is a force to be reckoned with, as his attacks only make him more fearsome and terrifying on the field. The Butcher is a melee assassin class; Class type is melee assassin. He still maintains a high damage output and health regen buff; he will be someone to look out for on the battlefield as attacks such as “Hamstring” can slow you down as well as damage you. Worse yet, he has “Butchers Brand”, which when applied to an enemy hero or unit is a debuff which drains health, and if targeted to a hero will grant double the regen! Lastly his deadliest attack is “Ruthless Onslaught”, which allows him to target any visible hero and with a successful hit, knocks them stunned.

Looking into his  Heroic abilities we have Lamb to the Slaughter and Furnace Blast; both are as gruesome in-game as they sound. With Lamb to the Slaughter you are able to pin down your enemy to the ground with a chain; if they try and run they will get pulled back into your kill-zone. If you’ve played Diablo III you know the next attack is just lovely; Furnace Blast is a high damage AOE which has a burst affect to maximize the damage output. This alone can easily take out several heroes with the proper support.

Lastly his trait, Fresh Meat. Now, if you didn’t already fear him based off of his attacks, this is definitely a reason to fear dying in the same lane. Fresh Meat allows him to consume the bodies of the fallen, giving him a 1% damage buff per unit and 3% per hero. This in the long game not only makes him especially dangerous but something to fear meeting in a lane by yourself.

Pro Tip: When you play The Butcher: be in lane to harvest as many bodies as possible during the early game. This will make you tanky mid game and allow you to float for team fights, taking on merc camps, and eventually roam the map entirely in the late game and pull off hero kills.

Now, the new map. We’ve been given Eternal Battleground, the first of many Diablo and Blizzard universe worlds to come over with the new content patch. This was actually teased earlier at BlizzCon in 2014; we knew it was coming, it was just a matter of when.

First thing to notice is this is a two lane map, one top and one bottom. This is very similar to Haunted Mines: there are tons of hiding places and sneaky little corners. Take note of the work that the level design team put in: there are two different, specialized tile sets in this map. They make it easy to find our merc camps and the level objective in the center with the two Immortals.

Like any Heroes map, there is a team objective to complete. Here, it’s to help kill the enemy team’s immortal. Simple enough? Well the Immortals are incredibly powerful when engaged by the heroes so you will need the force of all five of your team mates. The Immortals engage each other with ranged attacks and when heroes are present they have an AOE attack which can stun you if you’re too close.

The Immortals spawn at 1:45 on the clock in the center in any of the four circles, and will face a random direction. This gives you time to claim merc camps in between so your lanes are not left empty while pursuing the team objective. When the Immortals reach 50% health, they engage in a animated sequence in the center and switch sides. Once the enemy Immortal is defeated your Immortal gains their remaining health as a shield, which allows them to do ranged attacks against your enemy. This is crucial because they go for the strongest lane and wreck unholy havoc. Once their shield is down they go to heavy melee damage. Once dead, the clock restarts on their respawn, and the Immortals once again battle it out.

Touching on the merc camps, we have two bruisers and two siege units, both unique to the Diablo universe. For our bruisers we have Fallen Shamen, and for siege units we have Impalers. The Fallen Shaman units will summon demon hounds to attack your enemy or you; your strategy against this is to take out the Shaman as they resurrect fallen hounds and continue this ’till they themselves fall. Impalers are a long-range spear-throwing unit; your basic strategy here is get close and eliminate their range. They do heavy damage to walls, cannons and forts, so when you have some coming down your lane, be sure to take them out.

General map strategy, from what I’ve seen and read, is always be map-aware. Pay attention to your mini-map or your mine as well GG, and be on the offensive. If you are playing a Warrior class like Arthas, Diablo, or even The Butcher, you should be leading the charge. There are so many areas that you won’t be able to see, you can easily get killed if you’re not paying attention. As well, this is no place for glass cannons like Jaina. As the casters said in the stream, recommended Heroes are Nova and Zagara.

Nova’s stealth makes this her ideal battlefield. Any skilled or novice Nova player will dominate the field as long as they are quick and pay attention. As well, Zagara; oh, man, this place was built for Zagara. With abilities like Creep Tremor giving vision across the map, and being able to get in those hard to see places, she’s well-positioned for success here.

Now that you’re all pumped and psyched as much as I am, the official launch of the content starts June 30th, and continues on with the Eternal Conflict campaign going forward. As teased in the images, we’ve also seen new skins and mounts, so we all know more is to come.

So June 30th, you can catch me in the Nexus!