Has Fallout 4 Just Been Teased? (UPDATE: Confirmed, Trailer Inside!) 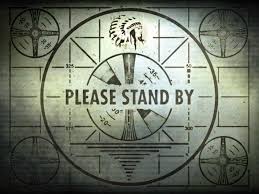 So this morning, I woke up to the best news-that-might-be-just-a-teaser-but-a-teaser-is-still-news news I have seen in a long time.

First, Bethesda changed their Facebook banner image to this:

Such a big teaser. What do you guys think, is this a prelude to announcing for the next Fallout installment? Or is this another hype up for E3?

Alternatively, what’s going to be new in this installment? A Fallout MMO? Fallout co-op?

Are you guys excited for the next Fallout? Personally, I am! I’ve been playing Fallout since I first touched a computer. I still remember the first time a deathclaw’s head blew up. What are your guys’ earliest Fallout memories?

Matthew Vinck is a Contributing Editor for aybonline.com.