Get Ready for some Carnage with Redie 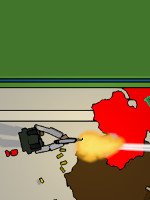 Indie development team Rückert Broductions recently announced their first game, Redie (pronounced Re – die). With the announcement, this team of two brothers also released an announcement trailer. Check it out!

As you can tell, Redie is a top down shooter. The game aims to focus on a challenging single player gameplay experience. The aesthetics of the game are interesting as they are bright and colourful with destructible environments. The visuals themselves are very simple and seem to focus on being able to clearly see where the enemies are coming from so the player can respond properly.

I am not going to lie, Redie reminds me a lot of the Hotline Miami series. My guess is there was some inspiration from that title. One major difference is that Redie does not focus on a story at all, solely providing an intense gameplay experience. Right now, I would like to give this game a try in order to see how it sets itself apart. Players can expect to give Redie a shot when it is released on December 1st on Windows and Linux.

Nedu has been known to enjoy wanton destruction… in video games. He is also a content writer for AYBOnline. His views are his own.